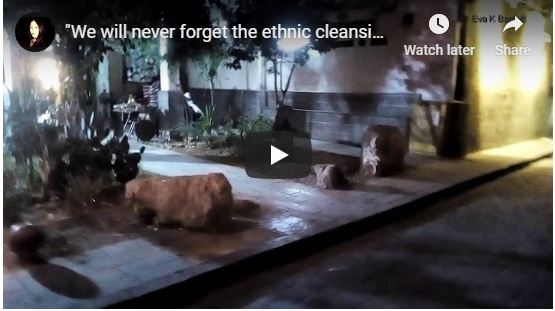 But also, do listen from ~3:00 when we reach the martyrs garden that (quoting Laith):

“commemorates the genocide of the Syriac Canaanites by the Kurdish militias under the order of the Ottoman Turks, in what is now part of Turkey but was part of Syria…

So when people speak to us here in Syria about the imaginary Rojova land, we will never forget that there was an ethnic cleansing of Arabs and Assyrians from our lands at the hands of Kurdish militias under the order of the Ottomans.”

“This is a monument to the 1915 genocide of Syriac Assyrians, its around the same time as the Armenian genocide.

Syria is full of Armenians, it’s where Armenians came and hid. My family is from Deir ez Zor. The first land that Armenians escaping genocide reached, a safe place, was Deir ez Zor.

My great grandparents hid a lot of Armenian families from the Kurdish militias that were coming into Deir ez Zor to look for Armenians that were escaping.”