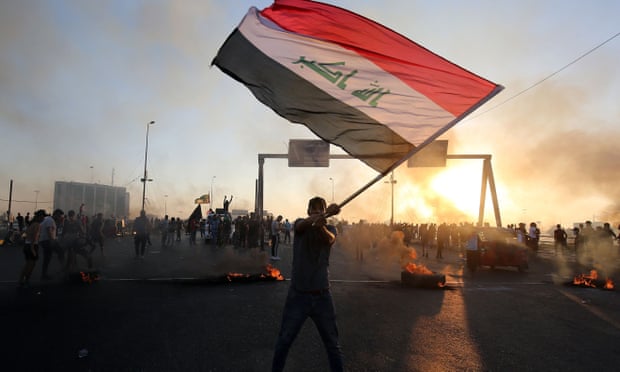 I would have updated many days earlier, but I was in Baghdad and the internet has been off since Wednesday. I left Iraq today mainly because I urgently needed internet to finish things I’ve been working on from Crimea and the DPR.

In spite of being in Iraq since Monday, I’m sorry to say I have no insights to offer you. I went there post-Russia–my visa ended September 30 and I needed to be somewhere before my intended October 6 arrival in Iraq. I thought I’d use the time to write and publish from my Russia and Donbass travels. I did the former (a lot), but not the latter.

Anyway, if you’re following the news, any news at this point, you may be aware of the protests in Iraq.

I can’t comment on them; I wasn’t able to get to any of the areas to see them. A curfew was imposed, I was on my own, so basically spent from Monday until this morning in the Baghdad area I had a small hotel room in, cut off from the world and relying on TV news sources–which is never, generally, a good idea if you want to really understand what/why is going on.

However, although I haven’t had the time to peruse and research in depth yet, here is what sources I trust have to say about the protests:

“They are pre-organized protests from certain groups in Parliament who are supported by the US. The PMU has said this will happen since July. They have been waiting for it because their intelligence told them so.”

“It is pre-organized. But there are genuine protesters. It’s a Facebook revolution, not a real one.”

[I’ll add my comments here: It seemed to be a Twitter revolution with the #hashtags that were super-trending like they would NOT for Yemen or Gaza. That said, everyone I spoke to said they want changes, complained about lack of work. So, in my humble opinion, it seems likely the West knows the genuine concerns/frustrations/sentiments and has hijacked them, yet again, for its own political agenda. But that is me surmising without the full picture and up since 3:30 am.]

“What a coincidence – Iraq PM demotes a US puppet from the Counter Terrorism Forces to the MoD, and then the opening of the Al Qaim crossing (with Syria).

“#Breaking #Iraq “demonstrators” stormed the Consulate of #Iran in Basra, looting it and setting it on fire. This while the biggest #USA embassy in the world, housing 30k mainly CIA employees, is safe and sound.”

“Masked gunmen went on a rampage today in Baghdad, Iraq, destroying the offices and equipment of over 15 television stations. Most of the stations targeted were Saudi, Kurdish and Jordanian owned or funded; all aligned with the Empire and its political objectives. This includes alArabia, Sky News Arabic and Jordanian tv. ”

I would have updated many days earlier, but I was in Baghdad and the internet has been off since Wednesday. I left Iraq…

0 thoughts on “Updates from Baghdad”