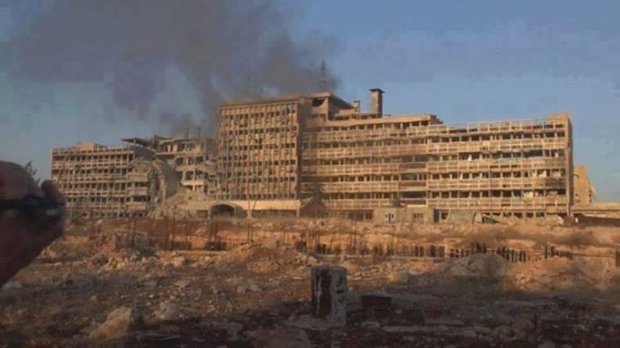 In November 2016, as corporate media continued to scream about hospitals in Syria, I travelled to Aleppo again. At Aleppo’s University Hospital I met Dr. Ibrahim Hadid, former Director of Al Kindi Hospital, the largest and best cancer treatment hospital in the Middle East. The hospital was destroyed by terrorists in December 2013 double truck bombing of Al-Kindi Hospital.

When speaking with Dr. Hadid, he stressed that he wanted medical colleagues and institutions to exert some of the concern they have for “hospitals” allegedly bombed in terrorist areas. They, and Western corporate media, have done the opposite, of course, largely ignoring the destruction of the top-notch Kindi hospital.

Kindi was not the only hospital targeted by terrorists. As I wrote previously:

“…Dr. Batikh said a private hospital, Al-Rajaa, was hit by a mortar attack. “They cannot do operations now, the operating room is out of service.”On Sept. 10, Dr. Antaki messaged me:“Yesterday, a rocket, sent by the terrorists, hit a maternity hospital in Aleppo in Muhafazat Street. Two persons working in the hospital were injured. No death. But the point is that it is a hospital and it was hit by a rocket.”
Dr. Batikh and Dr. Mazen Rahmoun, deputy director of Al-Razi, said the hospital once had 68 ambulances, but now there are only six. The rest, they said, were either stolen by terrorist factions or destroyed.Aleppo’s doctors continue to treat the daily influx of injured and ill patients in spite of the dearth of ambulances and effects of Western sanctions which mean a lack of medical equipment, replacement parts, and medicine for critical illnesses like cancer….”
The Dabeet maternity hospital in Aleppo also was bombed by terrorists, at least twice in 2016, killing three women.

I went there in July 2016 and spoke with the director, Dr. Dabeet, who showed me numerous photos of the damage to the hospital. But again, this was of no interest to corporate media, as the destruction (and murders) was committed by terrorists.

“…a rocket landed on a parked car right next to the al-Dabeet maternity hospital, causing a massive explosion which gutted the hospital interior, severely damaged the exterior, and burned the two cars parked behind it. Footage from a nearby building’s security camera shows the rocket and subsequent massive explosion occurred at 9:36 am, May 3rd.

The three women killed were in the al-Dabeet hospital reception at the time, said Dr. Dabeet. One of the injured included a 28-week-pregnant woman who survived the loss of long sections of her intestine due to shrapnel injuries.

The operating room was destroyed, along with patient rooms, five of ten incubators (the other five needing repair), and much of his equipment.

One week later the maternity hospital was again hit by a terrorist-fired mortar, destroying the roof and injuring construction workers there, according to Dr. Dabeet.

According to Dr. Zaher Buttal, other hospitals hit include the Ibn Rashd hospital, with a mortar hitting the top floor, the Arab Medicine hospital, and the perimeter of the Razi hospital.” 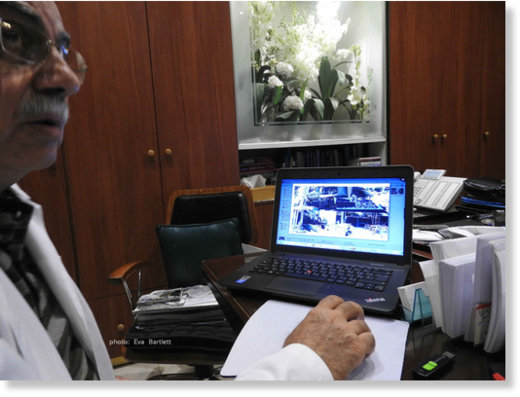 Dr. Dabeet showing me images of the Western-backed terrorist attack on the maternity hospital named after him

In Daraa, the state hospital was half destroyed/out of commission due to terrorist attacks or proximity when I visited in May 2018. See my Twitter thread on that, with videos.

Regarding claims of Syria/Russia bombing hospitals, frequently these claims are based in fiction. For example:

” …the New York Times staff somehow was not surprised that the allegedly bombed hospital was in a cave, far away from any settlements, where it’s impossible to provide even minimal conditions for the treatment of patients. Last week, 80 correspondents from various media outlets visited a similar cave during a press tour. They saw for themselves what was actually there: large supplies of weapons and ammunition belonging to terrorists, prisons, and places to hide tanks.

By a strange coincidence, the New York Times article was published right after the publication of revelatory materials about the real purpose of the terrorists’ caves in Idlib.””

More recently, this article states that a terrorist group in Idlib, “entered the central hospital of Idlib at gunpoint, and installed radio communication devices on the roof of the hospital building.” The article goes on to claim SAMS is aghast at this.

SAMS is well-known to be supportive of terrorist groups (and well-funded by the US State Department), but perhaps they’re upping their PR in light of the fact that journalists documented terrorists’ use of hospitals in Syria as headquarters.

For example, in Aleppo the Eye & Children’s hospitals complex were militarized by terrorist factions. From my 2017 article:

“…in the Eye Hospital complex, I passed a building marked as the headquarters of the Tawhid Brigade, and a building marked on an outside wall with the writing, “The Sharia court in Aleppo and its countryside,” before entering and descending to another underground prison.

*A building in the Eye Hospital complex which was used by the Liwa Tawhid brigade as a headquarters, Aleppo Syria, June, 2017. (Eva Bartlett/MinPress News)

It contained the same tight solitary confinement cells as in Lairamoun, as well as many dank, windowless, concrete rooms serving as mass cells for the unfortunate Aleppo residents imprisoned by the terrorists.

Many of the cement room-cells contained religious texts, in boxes and plastic crates, and on the main level two rooms had been used as classrooms, segregated by sex, for teaching the extremists’ beliefs to Aleppo’s mostly-Sunni Muslims.

Prisoners’ writings, with dates, on the walls showed that at least some of them were held in this dungeon for over a year. The fate of some prisoners was execution, depending on the perverted rulings of terrorist judges.

Western media played down the militarization of hospitals in Aleppo by al-Qaeda affiliates.

Independent British journalist Vanessa Beeley visited the hospital complex-turned-prison in April 2017 and interviewed a man who had been imprisoned for seven weeks by Jabhat al-Shamiya (the Levant Front coalition of al-Qaeda and Salafi terrorists) because he talked about how bad conditions were in East Aleppo, under the terrorists.

Beeley told me some of what the man, Ahmad Aldayh, a shopkeeper, had told her:

“I was eyewitness to one execution: A young man, the only child in his family, was arrested because the terrorists found on his mobile phone a photo of his friend holding the Syrian flag. They tortured him for more than four hours and then executed him.

We were all treated very badly. One woman begged three times for food and said she was starving. The warden ordered the prison guards to torture her for three hours as punishment for complaining. Just before the SAA fully liberated the area and the Eye Hospital on the 4th December 2016, 22 other prisoners were executed. They were all shot. They were also about to throw another prisoner off the roof of the building but the SAA advance was so fast they fled without killing him.”

Looking at just one example of the kind of propaganda coming from Western and Gulf media on Aleppo, a Newsweek article by Lucy Westcott, comparing Madaya with Aleppo, lamented… the Children’s Hospital “irreparably damaged by bombs dropped by the Syrian government last week, according to residents and medical workers…”

Westcott failed to mention the militarization of the Eye and Children’s Hospitals, let alone the below-ground dungeons for imprisoning civilians.

…In April 2016, media, in chorus, reported that the Syrians or Russians had “destroyed” the Quds hospital in Sukkari, eastern Aleppo. The source of this claim was Médecins Sans Frontières (MSF), which reported:

“According to hospital staff on the ground, the hospital was destroyed by at least one airstrike which directly hit the building, reducing it to rubble.”

The lie was repeated, including in this Washington Post report: “Airstrikes Wednesday night collapsed a hospital supported by Doctors Without Borders and the International Committee of the Red Cross (ICRC).”

Yet, in June 2017, I stood inside the intact Quds hospital, which had not been reduced “to rubble” as MSF had claimed. It is not plausible that the building was “destroyed” and then rebuilt while eastern areas of Aleppo were under military siege

On one ground floor wall inside the building, I saw a poster with the logo of an association (WATAN) backed by the Norwegian Aid Committee (NORWAC) in the colors of the Free Syrian Army logo. Next to it, a poster of another NORWAC-supported association, Khayr.

NORWAC openly declares its support of the two organizations that are based solely in areas controlled by al-Qaeda and other terrorist groups.

WATAN’s lofty self-description includes being a “nonpolitical and nonsectarian organization” and having the mission to develop “a sustainable, healthy and educated community, based on inclusive society that positively engages, supports and improves the lives of each individual, regardless of their gender, faith or ethnicity.”

The fact, however, that they work with al-Qaeda and other extremists which actively attack non-extremist civilians and oppress women, speaks the less lofty truth about WATAN’s concern for Syrians.

In November 2014, an article in Norwegian media revealed that ISIS had taken over the area (Tel Abyad) where since 2013 NORWAC had supported a hospital, providing 250,000 kroner a month to hospital staff.

It is incredible that NORWAC was willing to keep supporting an ISIS-controlled hospital, and it is further beyond credibility that NORWAC was not aware that the two organizations—Khayr and WATAN—which they supported in al-Qaeda occupied eastern Aleppo, were actually working with, and perhaps included, terrorists.

When Vanessa Beeley visited the premises in late December 2016, she documented the same intact state of the building, fortified with sandbagging around doors and windows, just as terrorists’ military headquarters had been….”

I’m sure there are many more examples I could include here. The point is, Western (and Gulf) corporate media has lied on many occasions about hospitals being bombed/destroyed, and at the same time has hypocritically ignore the actual bombing/sniping/destruction of hospitals, and those victims murdered or maimed during terrorist attacks.

So when you see another “last hospital” in Idlib tweet or another NYTimes factually-challenged article alleging hospitals targeted, think twice.

On Syrian hospitals being bombed…or not…

0 thoughts on “On Syrian hospitals being bombed…”