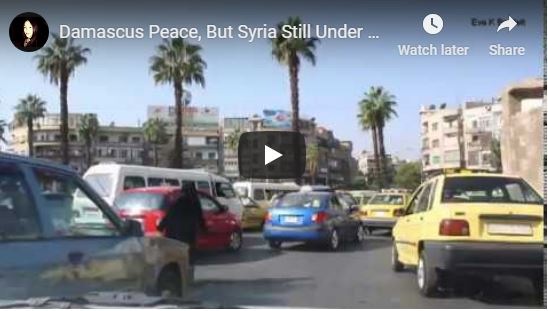 A morning drive and walk through Damascus, from the Old City to Midan to the artisan area, Tikkiyeh, near the National Museum.

We discuss Canada’s obscene preventing of Waseem Ramli from taking his post as honourary consul.

Lulwa talks about how Canada’s (shameful) closure of Syrian embassies/consulates years ago affect Syrian Canadians in a variety of ways, as well as prevented many Syrians in Canada from voting (democratically) in their presidential elections.

Lulwa also mentions a near-miss she and her mother had in 2011, when western media and fake-left insisted the “revolution” was peaceful in Syria: a site, in Midan, where a (terrorist) explosion took place roughly 15 minutes after they were there.

As we drive, Lulwa points out that the housing on the mountain is largely unregulated, meaning no permits to build the homes, and has been thus for a long time, even though most governments wouldn’t allow this. Certainly doesn’t fit the depiction of the Syrian government as draconian and against the people.

*Note: This evening, as I visited a family, they told me of how one member cannot get the conventional cancer treatment medications those in the West have access to, due to sanctions.

[Please, spare me the comments on this medicine. Holistic treatment or other may be more effective, the point is the right to choose which treatment is denied to Syrians, part of the West’s collective punishment of a people who would not kneel.]

Related:
Mark Taliano
“These crimes also violate the rights of Canadians to know the truth. The Canadian government’s full spectrum attack on Syria, from the closure of Syrian Embassies which denied expatriate Syrians their right to vote in the 2014 Syrian elections, to the economic blockade, to the information blockade, to the covert support for al Qaeda and affiliated terrorists, means that Canadians themselves are left in a vacuum of imposed ignorance, impaired by the war lies, unable to be informed citizens, and to hold their government to account.”
https://ingaza.wordpress.com/2019/10/21/damascus-peace-but-syria-still-under-strangling-western-sanctions-embassy-closures/
Tags: Syria