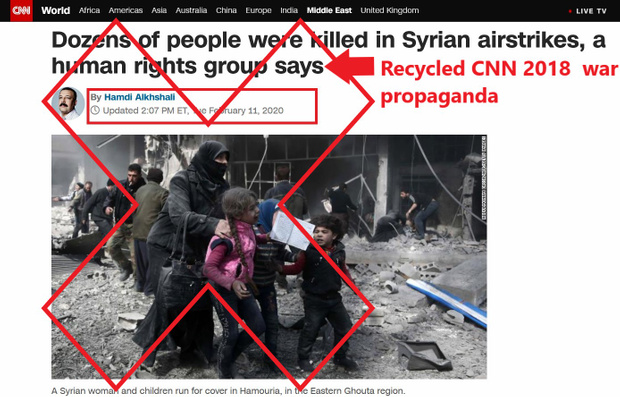 According to the recycled 2018 article, eastern Ghouta is *now* (2020) being bombed. Of course, even looking at just the 2018 lies, they were based on one man in the UK who pretends he is an organization (SOHR) and of course the White Helmets, based in Syria–solely in terrorist occupied areas of Syria.

It turns out the CNN article in question was penned (or copy-pasted) in 2018, but updated recently (although seemingly no new content, and certainly no content related to Idlib, the hub of al-Qaeda, which Syria and Russia and allies are working to liberate now and which should be newsworthy).

Eastern Ghouta was liberated of the terrorists of Jaysh al-Islam, Faylaq al-Rahman, al-Qaeda in Syria and others ➡️ in 2018 ⬅️

On a CNN source, the “SOHR”/Rami/Osama & eastern Ghouta war propaganda, see my: “UN Feigns Outrage Over Ghouta While Terrorists’ Rockets Rain Down on Damascus“.

Truly, utterly, pathetic CNN, posting a “news article” on an area long-liberated and already rebuilding, where women can choose how they dress and kids can go to school (schools in terrorist-occupied areas are frequently used as terrorists headquarters).

There is no reasonable  explanation for updating the propaganda piece to a current date. CNN may claim there was a minor edit, but as a “professional news  organization”, if that were the strange case, they should remove the  fake news article (from the rest of their current fake news)…

If you want to read how life *actually* was in eastern Ghouta under terrorist rule, my article after I *actually went to* (instead of relying on the fairy tale spewing SOHR) eastern Ghouta and interviewed civilians:

“…I asked about their lives under the rule of Jaysh al-Islam and others, including why they had been starving in the first place. The reply was, as I and others  heard in eastern Aleppo, Madaya, and al-Waer, the terrorists stole aid and controlled all food, only selling food at extortionist prices which ordinary people could not afford.

Sabah al-Mushref spoke of the callousness of terrorists in Hammouriyeh and Zamalka towards children and how her own children used to scavenge from the garbage of terrorist leaders who had ample food.

“I was living in Zamalka, my children were almost dead of hunger, my daughter’s skin had turned yellow, she was malnourished,” Sabah told me. “I took her to the medical point, they said there was no medicine. I said, ‘my daughter is dying, what should I do?!’ They told me the medical point was only for Douma citizens.

I went to the representative of Zamalka, I begged him, ‘Please give me anything for my children, they are starving, they haven’t eaten anything for two days.’ He said, ‘What is here is only for Zamalka citizens, you are from Marj al-Sultan, go to your representative. There is no aid for you here.’”

When I spoke with Sabah, she was with three other people from eastern Ghouta areas. Their testimonies spilled out, each one worse as they spoke out loud of the horrors they had lived through.

Mahmoud Souliman Khaled, 28, from Douma, spoke of his imprisonment and torture by Jaysh al-Islam.

They stopped me at night, I was on my way to get something. They suspected that I was working for the regime, helping the army. They took me to al-Taoubah prison, where they tortured me. They would tie me to a chair and shock my hands or the top of my toes. They would tie two wires to my toes then plug the other end to the inverter and shock me. They would keep doing that until you confess to something. I didn’t confess, because I had nothing to confess to. They tortured me for two days. What they did caused me to have a severe myopia, it felt like electricity came out of my eyes.”

They confiscated our goods and imprisoned us. Nobody was allowed to work unless that it was under control.”

In an ice cream shop near the square, Abdallah Darbou also said he’d seen such executions. He also spoke of protests.

“Many times, we held protests against the terrorists, because we were starving, they were killing us. Sometimes they shot on us during the protests. They destroyed us, they really destroyed us. “The Syrian regime didn’t do that to us, when the army entered here they distributed bread to us, before that we only saw bread in photos.”

Walking around Douma on April 29, I met Yahya Mohammed Hamo, selling oranges on a push cart. When I asked him what life had been like under Jaysh al-Islam, he replied, “hunger, hunger, and hunger. If they have a religion, be cursed that religion. Religion doesn’t make them starve you.”

“Terrorism, they are the literal meaning of terrorism,” Toufik Zahra, the stand owner, said.

To my question on whether the White Helmets were helping people, Zahra replied:

In Kafr Batna, the Shawarma vendor, Mou’taz Al-Aghdar, said, “Jaysh Al-Islam used to attack us wearing a white helmet one day and leaving it behind another day.” The young man in the ice cream shop, Abdallah, replied that he didn’t know anything about the White Helmets because he and civilians in general weren’t allowed to go near them.

That in itself is strange, given their supposed focus is saving civilians, and given that the White Helmets had centers in Douma, Zamalka, and Saqba. The White Helmets center in Saqba was less than 500 meters away from Kafr Batna. Notably, it was also just 200 meters down a lane from a building where Faylaq al-Rahman manufactured vast amounts of missiles and mortars.

Marwan Qreisheh, in the Horjilleh center, had a lot to say about the White Helmets.

The first civil defense members who arrived to Ghouta three or four years ago came from foreign  countries, they weren’t Arabs, didn’t speak Arabic. They were the terrorists’ defense, they used to terrorize. They had plenty of money and used it to attract people to join the civil defense.

When the White Helmets wanted to go somewhere, terrorists used to go with them and open the roads for them. The moment they would arrive at a place where they wanted to fake an attack, they threw 10 smoke bombs, causing heavy smoke, you couldn’t see anything. They used to shoot people, and after the smoke cleared, they start filming. It was impossible to say a word because they would kill you, they would empty their gun on you immediately.

If someone’s arm veins were cut, they would amputate immediately and stitch the wound, while filming. If someone’s leg was injured because of bullet, a piece of glass, or anything, their first treatment was amputation.”

Qreisheh’s claims about amputation were echoed by Hanadi Shakr, from Saqba, who worked for a year as a nurse until her husband, who had joined Jaysh al-Islam, forced her to quit.

“Every time there was a case that was a bit severe, they would say you must amputate this person. They would say that we are in short of medical supplies and so amputation is the best choice. They didn’t use to treat people. Even people who had minor surgery, they would just amputate it.”

Claims of lack of medical supplies turned out to be false, as in eastern Aleppo. In an underground hospital in Saqba alone, I saw rooms full of medicines and stolen medical equipment. Syrian journalists documented such stores elsewhere in eastern Ghouta.

According to Hanadi Shakr, “All of the medical and food aid that was brought in, it would just vanish, they would sell it and take the money. Everything went to the leaders of the terrorist factions.”

When eastern Ghouta was being liberated, corporate media was busy churning out fake reports of massacres, just as corporate media did when Aleppo was being liberated. They produced stories  emanating from supporters of terrorist factions, always blaming the Syrian government for starvation, and above all, whitewashing the crimes and terrorism of extremist groups occupying eastern Ghouta.

In reality, Ghouta civilians had much to say about their captors’ crimes, and also about their relief at being liberated by the Syrian Army, but corporate media isn’t interested it doesn’t fit their regime-change.