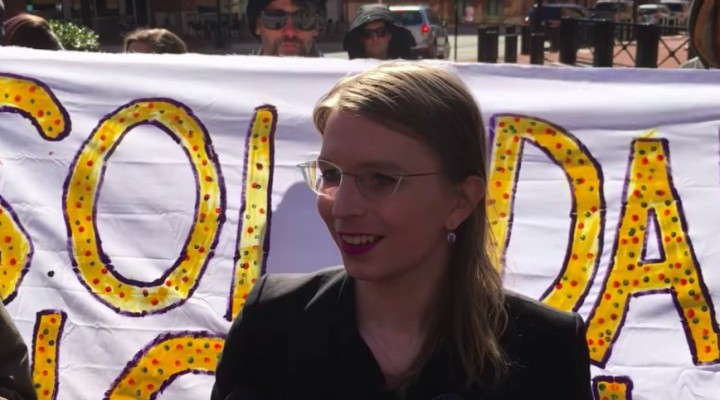 After being imprisoned for seven years under draconian conditions which twice drove her to suicide, whistleblower Chelsea Manning has again been thrown behind bars for defending government transparency. Manning has been jailed in contempt of court after refusing to testify before a grand jury related to Assange and WikiLeaks, saying she “will accept whatever you bring upon me.”

“The judge said she will remain jailed until she testifies or until the grand jury concludes its work,” AP reports.

“Note that Manning is not jailed as a ‘punishment’,” WikiLeaks tweeted. “She has formally been jailed to ‘coerce’ her into testifying against our journalists (including Assange) for publishing the truth about the US government. She will remain in jail until she breaks and complies or wins on appeal.” 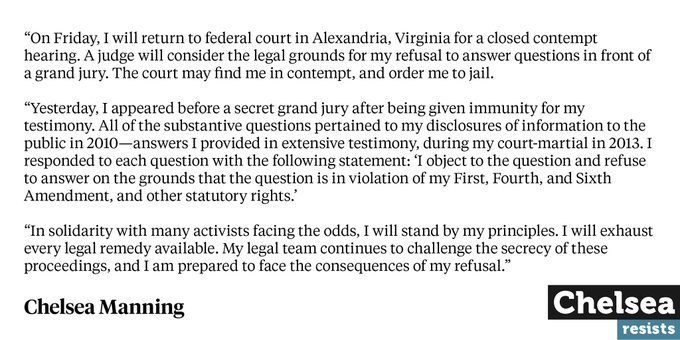 Manning responded to all of the grand jury questions by saying, “I object to the question and refuse to answer on the grounds that the question is in violation of my First, Fourth, and Sixth Amendment, and other statutory rights.” Manning explained her decision in the following statement:

“I will not comply with this, or any other grand jury. Imprisoning me for my refusal to answer questions only subjects me to additional punishment for my repeatedly-stated ethical objections to the grand jury system. The grand jury’s questions pertained to disclosures from nine years ago, and took place six years after an in-depth computer forensics case, in which I testified for almost a full day about these events. I stand by my previous public testimony. I will not participate in a secret process that I morally object to, particularly one that has been historically used to entrap and persecute activists for protected political speech.”

Manning’s defense team further explained her objection to being forced to testify:

“Due to their secretive nature and limitless subpoena power, the government has utilized grand jury processes as tools for garnering information about movements by questioning witnesses behind closed doors. Since testimony before grand juries is secret, grand juries can create fear by suggesting that some members of a political community may be secretly cooperating with the government. In this way, grand juries can seed suspicion and fear in activist communities.”

Daniel Ellsberg, who like Manning is one of the greatest American whistleblowers of all time, made the following statement upon Manning’s arrest:

“Chelsea Manning is again acting heroically in the name of press freedom, and it’s a travesty that she has been sent back to jail for refusing to testify to a grand jury. An investigation into WikiLeaks for publishing is a grave threat to all journalists’ rights, and Chelsea is doing us all a service for fighting it. She has already been tortured, spent years in jail, and has suffered more than enough. She should be released immediately.”

“Really this isn’t about Chelsea Manning at all,” journalist Ben Swann told RT today. “It’s really about for the government to try and to create a concept, a narrative, in which they demonstrate that Assange and WikiLeaks assisted Manning in retrieving and obtaining classified documents, which WikiLeaks then published. And the reason that’s significant is because, under the Espionage Act, they want to charge Assange with having committed espionage against the United States.”

In other words, they can’t arrest Assange for publishing leaks given to WikiLeaks, but they can try to manipulate a narrative that he was involved in Manning’s exfiltration of government documents. This seems like the most plausible scenario to me, and since WikiLeaks shared Swann’s comments on the outlet’s Twitter account it seems they find it plausible as well.

And of course the fauxgressives who’ve been shrieking about Trump’s “war on the press” for two years have nothing to say about this administration setting a horrifying precedent by throwing a whistleblower in jail in order to force a journalist’s source to testify against them. Of course the McResistance who’s been screaming bloody murder about Trump saying mean things about Jim Acosta has nothing whatsoever to say about this administration pursuing the arrest of a journalist in a precedent which would be devastating for press freedoms around the world.

“If Chelsea Manning changed her name to ‘Pussy Riot’ and her location to ‘Russia,’ we might hear some outrage from official Washington and the Beltway press corps that claims to care so much about press freedom,” said journalist Max Blumenthal today.

“I continue to find it astounding that media stars have spent two years prancing around proclaiming Trump poses a grave threat to press freedom because he tweets insults at Chuck Todd, while they ignore by far the greatest press freedom threat: their attempt to prosecute WikiLeaks,” added journalist Glenn Greenwald.

“If a pundit complains that Trump sending mean tweets about cable news anchors is an existential threat to press freedom, but then says nothing about Chelsea Manning being re-incarcerated (she’s one of the most important journalistic sources in US history) you know they are frauds,” said journalist Michael Tracey.

If Chelsea Manning changed her name to “Pussy Riot” and her location to “Russia,” we might hear some outrage from official Washington and the Beltway press corps that claims to care so much about press freedom https://apnews.com/569631f2b11c400cac05a29e0853624b?utm_source=Twitter&utm_medium=AP&utm_campaign=SocialFlow …

Chelsea Manning jailed for refusing to testify on WikiLeaks

ALEXANDRIA, Va. (AP) — Former Army intelligence analyst Chelsea Manning, who served years in prison for leaking one of the largest troves of classified documents in U.S. history, was sent to jail…

1,453 people are talking about this

The United States government has just re-imprisoned one of the nation’s greatest whistleblowers to coerce her into helping to destroy the world’s greatest leak publisher, both of whom exposed undeniably true facts about war crimes committed by that same United States government. Truth tellers are being actively persecuted by this same power structure which claims it has the moral authority to topple governments and interfere in international affairs around the world, exactly because they told the truth. Please take a moment to make sure you’re really appreciating this.

Assange started a leak outlet on the premise that corrupt power can be fought with the light of truth, and corrupt power has responded by smearing, silencing, and persecuting him and doing everything it can to stomp out the light of truth, up to and including re-imprisoning an already viciously brutalized American hero like Chelsea Manning. This is as clear-cut an admission as you could possibly get that the most powerful forces in our world are not at all what they pretend to be. Those who run US government agencies and their collaborators are monsters, and they’re not even hiding it.