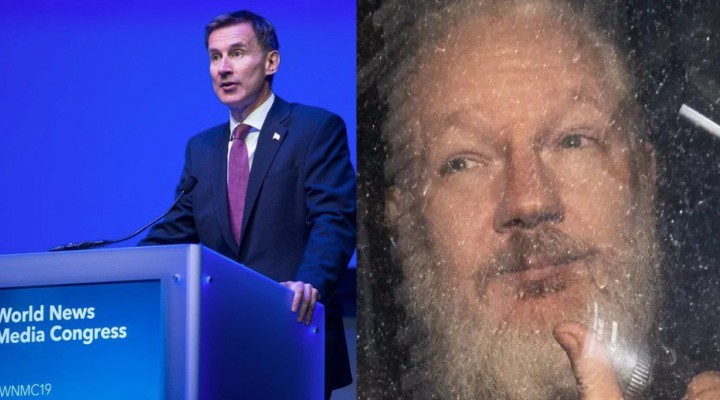 British Foreign Secretary Jeremy Hunt has just given a speech extolling the virtues of a free media, praising the journalists who’ve been brave enough to expose the truth about wicked governments in the face of tyrannical oppression. While he was preparing to give this speech, without any indication of any self-reflection at all, he defended the torture of WikiLeaks founder Julian Assange.

After news broke that UN Special Rapporteur on torture Nils Melzer had found that Julian Assange has been the victim of psychological torture for years, Hunt, who is gunning to become the UK’s next Prime Minister, accused him of interfering in British affairs and making “inflammatory statements”.

“This is wrong,” Hunt tweeted. “Assange chose to hide in the embassy and was always free to leave and face justice. The UN Special Rapporteur should allow British courts to make their judgements without his interference or inflammatory accusations.”

“With all due respect, Sir: Mr Assange was about as ‘free to leave’ as a someone sitting on a rubber boat in a shark pool,” Melzer replied. “As detailed in my formal letter to you, so far, UK courts have not shown the impartiality and objectivity required by the rule of law.”

This is wrong. Assange chose to hide in the embassy and was always free to leave and face justice. The UN Special Rapporteur should allow British courts to make their judgements without his interference or inflammatory accusations. https://www.standard.co.uk/news/uk/julian-assange-showing-symptoms-of-psychological-torture-un-expert-to-say-a4155791.html …

Julian Assange is suffering the symptoms of psychological torture, a United Nations expert said today as he argued the WikiLeaks co-founder should not be extradited to the US.

2,048 people are talking about this

If you want to stare aghast at some of the most appallingly cartoonish hypocrisy from a western politician you’ll ever see, I highly recommend clicking this hyperlink and reading through the transcript of Hunt’s speech in the context of what he just said about Assange.

Hunt decried the murder of Jamal Khashoggi, ignoring the inconvenient fact that his own government had just been found guilty of participating in the brutal torture of a far more impactful journalist spanning many years. Hunt sang the praises of two Reuters journalists who’d recently been released from prison in Burma after exposing a massacre of 10 Rohingya Muslims, right after defending the torture of the journalist who released the Collateral Murder video showing the massacre of 18 civilians, the fatalities from which included two Reuters journalists.

“The latest World Press Freedom Index describes how the ‘number of countries regarded as safe, where journalists can work in complete security, continues to decline’,” Hunt said. “And yet despite all the pressure, the risk – from physical threats, from insidious self-censorship – journalists in many countries press on with holding the powerful to account, exposing wrongdoing, deterring corruption, and strengthening democracy and openness.”

“We cannot physically stop journalists from being locked up for doing their jobs. But we can alert global public opinion and make sure the diplomatic price is too high.”

“Authoritarian states might launch sudden ‘crackdowns’ against corruption – which mysteriously target political opponents while leaving others untouched – but the risk of exposure by a free media is far more effective than any theatrical campaign.”

“But in the end, we must promote a free media not solely for practical reasons but because it’s what we stand for. Democracy and freedom of expression mean nothing unless independent journalists are able to scrutinise the powerful – and discover the stubborn facts – however inconvenient this might sometimes be for the politicians on the receiving end.”

“A free media is not an optional extra, still less a ‘Western’ value: it forms one pillar of a thriving society, benefiting people in every corner of the world.” 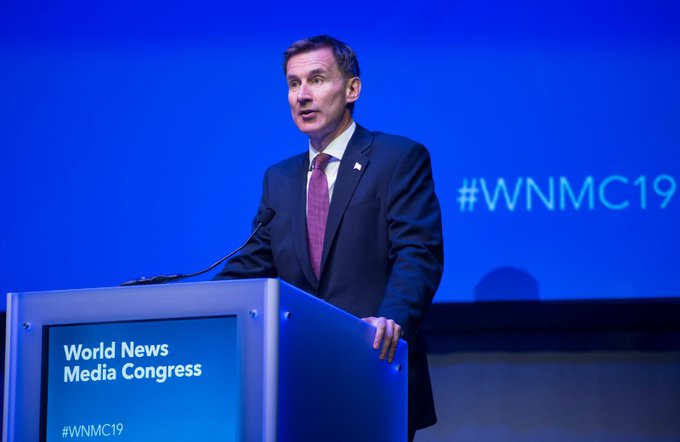 A free media is not a “Western” value but a pillar of a thriving society, benefiting people across the world. To embrace the opportunities of a free society we must defend the press. My speech in Glasgow to #WorldNewsMediaCongress @NewspaperWorld https://www.gov.uk/government/speeches/world-news-media-congress-foreign-secretarys-speech …

Hunt’s tweet defending Assange’s torture and his sanctimonious, self-congratulatory tweet about the speech he’d just given were about 29 hours apart. Twenty-nine hours.

Hunt, who has been leading the charge in smearing Assange since his arrest and imprisonment, is scheduled to co-host a London summit next month on media freedom.

The “liberal democratic values” that these self-righteous windbags pretend to promote at their conferences and their summits are neither liberal nor democratic. We are led by smiling sociopaths who are selling us Nice Guy Fascism. A jackboot wearing a “Coexist” button. A smiley-faced mask covering a hateful, blood-spattered grimace.