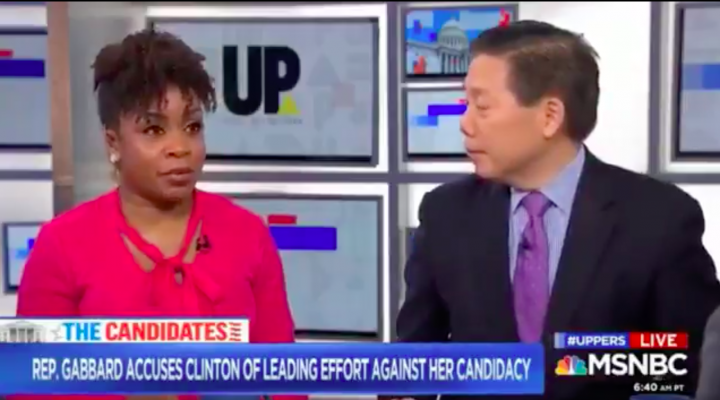 There’s a video clip circulating on Twitter right now that simply has to be seen to be believed, in which a gaggle of MSNBC pundits are seen furiously agreeing with each other that Tulsi Gabbard has incriminated herself by pushing back against Hillary Clinton’s obnoxious claim that she is a Russian asset.

I refuse to spend any portion of my life researching the name of whatever MSNBC show this was or the panelists it features, but here’s a quick breakdown for posterity:

“One thing that was interesting about Tulsi Gabbard’s response, I mean she went after Hillary Clinton, she was strong, she said she wasn’t gonna run as a third party candidate — she never denied being a Russian asset,” said a panelist MSNBC identifies as Kimberly Atkins. “That was the one aspect that was missing from her response, which, you know, you would think that would be within the first line or two. It was not there.”

“When Hillary Clinton says there’s a Russian asset and doesn’t say anybody’s name and Tulsi Gabbard goes ‘How dare you call me a Russian asset?’,” added some talking beanbag chair identified by MSNBC as Jonathan Allen.

“Wait, so Kimberly’s right, she didn’t say she was a Russian asset,” interjected another super excited panelist, possibly the show’s host but who cares. “To your point, Hillary Clinton didn’t name names, but there’s Congresswoman Gabbard going ‘Me! Me, me! Me!’”

Now, to be clear, all of these panelists are knowingly lying when they suggest that Clinton may not have been talking about Gabbard. Literally everyone knew that Hillary Clinton was talking about Gabbard from the moment news broke about her libelous comments, which, as Gabbard pointed out in a recent interview, was evidenced by the fact that all the news headlines about those comments featured Gabbard’s name. Clinton referred, using female pronouns, to a Democratic primary candidate who is a “favorite of the Russians”; nobody in the world thought she was talking about Elizabeth Warren, Kamala Harris or Amy Klobuchar, because those candidates have never been smeared as Russian assets, only Gabbard has. The self-evident fact that Clinton was referring to Gabbard was then quickly confirmed by a Clinton aide.

The panelists are also lying when they claim that Gabbard has not denied being a Russian asset; obviously if you call something a “smear” as Gabbard has consistently been doing you are saying that it is false. But that should not matter. Claiming that an evidence-free conspiratorial McCarthyite smear is true because the target of that smear did not prostrate themselves sufficiently to deny it is disgusting and shameful in and of itself. The burden of proof is always on the party making the claim, and extraordinary claims require extraordinary evidence. If an extraordinary claim is made with no evidence at all, the party making that claim should be promptly shamed and dismissed.

One of the most infuriating things about the Russia hysteria which has polluted western political discourse is the way people keep getting away with side-mouthed insinuations and innuendo, saying things without directly saying them so that when someone responds to what they’re saying they can go “What! Why I never said that, but my my, it’s very interesting that you think I did?” Hillary Clinton knew very well that everyone would understand who she was talking about, but the fact that the target of her smear responded directly is being spun by her flying monkeys as something weird and suspicious instead of something perfectly normal and appropriate.

As much as I speak out against violence and aggression, on a personal level I find passive aggressiveness to be far more obnoxious than just confronting someone head-on. The appropriate response to someone making cowardly indirect accusations is to directly confront them and call out what they’re really saying and describe what they’re really doing, as Tulsi Gabbard did.

So let’s say directly what the MSNBC panelists above tried to get away with saying indirectly: MSNBC aired a segment in which panelists falsely claimed that Tulsi Gabbard incriminated herself as a Russian asset by responding to Hillary Clinton’s smear job. They lied, and they will get away with lying, because billionaire-controlled media like MSNBC is designed to manufacture consent for the status quo upon which the empires of billionaires like Brian L Roberts (whose parent company Comcast controls NBC) are built. Call the propagandists what they are, and shame these passive aggressive Red Scare tactics for the brain poison that it is.