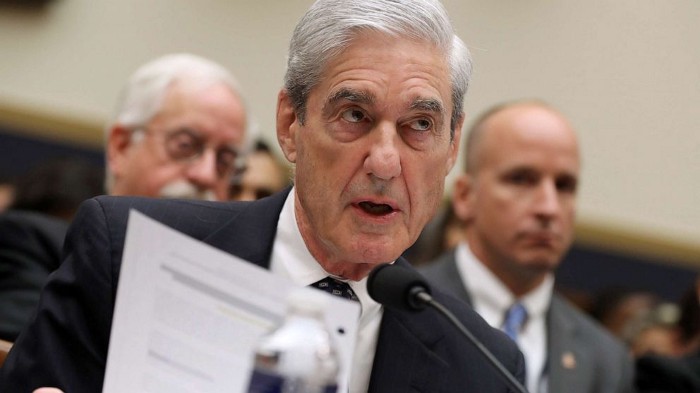 “After watching seven hours of a spectacle that felt much more cruel than enlightening, I cannot avoid pondering a question which honestly gives me no joy to ponder: just how much damage has MSNBC in particular done to the left?” The Hill’s Rising star began, before excoriating her former employer’s “fevered speculations” about an “Infowars conspiracy theory” and the way it hosted people like Jonathan “maybe Trump has been a Russian asset since the 1980s” Chait and “conspiracy gadfly Louise Mensch” in search of ratings bumps.

“This whole setup has done more damage to the Democrats’ chances of winning back the White House than anything that Trump could ever have dreamed up,” Ball argued. “Think about all the time and the journalistic resources that could have been dedicated to stories that, I don’t know, that a broad swath of people might actually care about? Healthcare, wages, the teachers’ movement, whether we’re going to war with Iran? I’m just spitballing here. I actually heard some pundit on Chris Hayes last night opine that independent women in middle America were going to be swayed by what Mueller said yesterday. Are you kidding me? This is almost as bonkers and lacking in factual basis as that time Mimi Rocah said that Bernie Sanders is not pro-women because that was what her feelings told her. Rocah, by the way, a political prosecutor with no political background, is only opining at MSNBC because of her role in leading viewers to believe that any day now SDNY is going to bring down Trump and his entire family.”

Ball argued that the fact that MSNBC is doing so much damage to the Democratic Party in the name of ratings proves that MSNBC isn’t “on Team D in the same way that Fox News is on Team R”, saying they’re really just in it for the money. But this is where Ball gets it wrong. It is of course true that ratings are a factor, and that conspiracy theories can be used to sell advertising space, but MSNBC would have had a much easier time marketing conspiracy theories about Trump’s loyalties to Israel and Saudi Arabia, both of which would have had vastly more factual evidence to back them up. The only difference is that the US-centralized empire doesn’t have agendas that it wants to advance against those two countries.

Ball is correct that MSNBC doesn’t serve the Democratic party, but she’s incorrect that it serves only money. MSNBC, which is now arguably a more aggressive war propaganda network than Fox News, serves first and foremost the US national security state. And so do all the other western mainstream news networks.

Consider the way the Syrian province of Idlib is being reported on right now, to pick one of many possible examples. Al-Qaeda-controlled Idlib is the final stronghold of the extremist militant groups that the US and its allies flooded Syria with in a premeditated campaign to effect regime change, and Syria and its allies are fighting to recapture the region. They are using methods that are identical to those commonly used by the US and its allies, yet the bombing campaigns of the US-centralized empire receive virtually no critical coverage while western mainstream outlets like CNNand the BBC are churning out brazenly propagandistic pieces about the evils of the Assad coalition’s airstrikes.

“Civilians are dying in Idlib, just as they died in their thousands in recent US UK air strikes in eg Raqqa and Mosul,” political analyst Charles Shoebridge observed on Twitter today. “The difference is that when it’s (often unverified) claims that Russia or Syria are doing the killing, US UK media make it front page news.”

This marked discrepancy is due to the fact that western mass media outlets serve not a political party, nor even money, but the power structures of the western empire. This is the real reason why Russia hysteria has been mainlined into mainstream consciousness day in and day out for three years. Not for ratings, not to hurt Trump, not to help the Democrats, but because Russia is viewed as a disobedient geopolitical adversary by the US-centralized power alliance. That’s all it’s ever been.

There are many gaping plot holes in the Russiagate narrative that outlets like MSNBC have been bashing everyone over the head with, but the most obvious and easily provable of them is the indisputable fact that Donald Trump has escalated tensions against Russia more than any US president in decades. You never hear anyone talk about this self-evident fact in all the endless yammering about Russia, though, because it doesn’t advance the agendas of either of America’s two mainstream parties, and it doesn’t advance the interests of US imperialism. Democrats don’t like acknowledging the fact that Trump has been consistently and aggressively working directly against the interests of Moscow, and Trump supporters don’t like acknowledging that their president is just as much of a neocon-coddling globalist as those they claim to oppose, so the war machine has gone conveniently unchallenged in manufacturing new cold war escalations against a nation they’ve had marked for destruction since the fall of the Soviet Union.

In a very interesting new Grayzone interview packed full of ideas that you’ll never hear voiced on western mass media, Russia’s Deputy Foreign Minister Sergei Ryabkov spoke openly about the various ways that Russia, China, and other nations who’ve resisted absorption into the blob of the US power alliance have been working toward the creation of a multipolar world. Ryabkov said other nations have been watching the way the dominance of the US dollar has been used to economically terrorize noncompliant nations into subservience by way of sanctions and other manipulations, with Washington expecting that the dollar and the US financial system will remain “the cardiovascular system of the whole organism.”

That, right there, is the real reason you’re being sold Russia hysteria today.

And it isn’t just on the matter of financial systems in which the unabsorbed powers are uniting against the imperial blob. Russia and China just carried out their first joint air patrol on Tuesday, drawing a hostile response from imperial vassals Japan and South Korea.

“Russian and Chinese bombers on ‘first’ joint patrol in the Asia-Pacific region. The China-Russia alliance has become a reality and will last for long time,” reads a post by one Russian Twitter commentator in response to the news.

The emergence of this alliance, which the Chinese government has warned Washington is ‘not vulnerable to interference’, has been something the west has feared for a long time. A Pentagon white paper published this past May titled “Russian Strategic Intentions” mentions the word “China” 108 times. Some noteworthy excerpts:

I think you get the picture. From the Pentagon’s point of view, US hegemony good, Russia-China alliance very, very bad. Analysts like the white paper’s authors, and even The New York Times editorial board, have urged the drivers of US foreign policy to attempt to lure Moscow away from Beijing, the latter rightly perceived as the greater long-term threat to US dominance due to China’s surging economic power. But diplomacy has clearly been ruled out toward this end, with only a steadily escalating campaign to shove Russia off the world stage now deemed acceptable.

This is all happening because after the USSR fell and America emerged as the undisputed ruler of a unipolar world, it was determined with the help of influential neoconservative think tankers that the US must maintain this unipolar paradigm at all costs. As soon as that view became the establishment orthodoxy, any threat to US hegemony was now interpreted as a threat to national security. An “attack” on America was no longer limited to physical attacks on US soil, or even on US allies and assets: any attempt to escape unipolarity is now treated as a direct attack on the empire.

This is why we’ve seen nations like Iraq, Libya and Syria spoken about by the propagandists as “enemies” as though they pose some kind of direct threat to the American people. There was never any actual threat to the physical United States, but those nations were not complying with the dictates of US hegemony, and that noncompliance was treated as a direct attack.

This “if you’re not obeying us you’re attacking us” mentality is ridiculous on its face and no right-thinking citizen would ever consent to it, which is why the consent manufacturers need to promote imaginary nonsense like weapons of mass destruction, a Russian “attack” on American democracy, and a conspiracy theory about the Kremlin infiltrating the highest levels of the US government. It’s got nothing to do with actual fears of those nations posing any threat to actual Americans. It’s about continuing to rule the world.