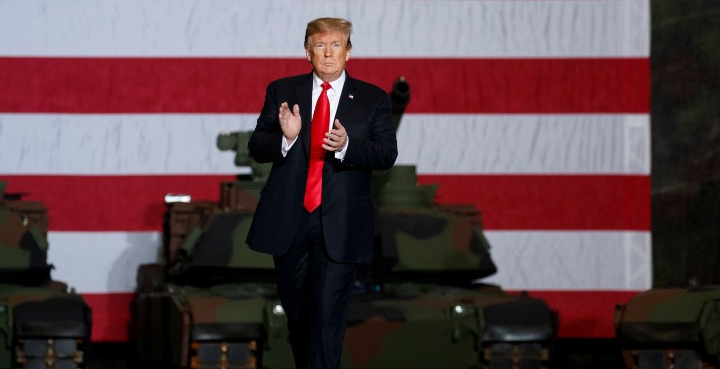 It would be great if Americans could put someone in charge of their military who actually opposes war. To believe that that has already happened is reckless and delusional.

Whenever I criticize the foreign policy of the current US administration, I always get some pushback from Trump supporters who insist that this president is doing more good than harm by “fighting the Deep State” and, even more commonly, by “keeping us out of wars”.

This notion that Donald Trump is some kind of peace president, or even the notion that he puts any more inertia on the US war machine than his predecessor did, is contradicted by all facts and evidence we have available to us. Trump has not ended a single one of the wars his predecessors started, and has added dangerous escalations against Venezuela, Iran, and nuclear-armed Russia.

One of the difficulties in addressing this persistent myth, besides the obvious fact that everyone now lives in tightly cloistered information echo chambers of confirmation bias-feeding validation loops, is that the myth is in some ways bipartisan. Whenever Trump mumbles one of his empty appeals to non-interventionist principles, his supporters lap it up while half of the Democrats start attacking the president for being insufficiently hawkish. Trump’s talk about withdrawing from Syria is a perfect example of this; the troops are still there, but Dems attacked him for irresponsible “isolationist” behavior and his supporters got their fairy tale about their president ending wars. Everyone gets what they want, including the military-industrial complex that Trump pretends to oppose.

But the fact that liberal hawks attack Trump for not being as warlike as he could possibly be in every possible area doesn’t make him a peace president, any more than neocons attacking Obama for the same reason made him a peace president. Right-wing hawks viciously attacked Obama for refusing to arm Ukraine against Russia and for refusing to attack Damascus over the chemical weapons “red line” (both of whichare neoconservative agendas that Trump has fully fallen in line with, by the way), but that doesn’t negate Obama’s depraved acts of interventionism in Libya, Syria and elsewhere. Both Trump and Obama have at times refused to go quite as far as the most virulent warmongers wanted them to, but that doesn’t mean either oppose war.

If you want a fair, accurate and nonpartisan insight into how much of a war whore the sitting president is, click this hyperlink to get to a list by the antiwar organization St Pete for Peace titled “Trump Foreign Policy Fact Sheet — An up-to-date chronology of the good and the bad of the Trump administration’s foreign policy — from an antiwar perspective”. The fact sheet takes news reports about this administration’s foreign policy statements and decisions and files them under ‘Good’ and ‘Bad’ columns. There are some things in the ‘Good’ column, like Trump’s meetings with Kim Jong-un and his refusal to strike Iran for downing a US drone, but just scroll down and see for yourself how much longer the ‘Bad’ column is than the ‘Good’.

This to me is by itself a pretty solid refutation of the notion that this president is anyone who can be supported on antiwar grounds. Whenever a Trump supporter argues against my criticisms of this administration, their arguments always come from the ‘Good’ column while completely ignoring the ‘Bad’. This is only possible because of the echo chamber dynamic which allows political partisans to absorb positive news about their favorite political faction without hearing about any of the negatives; the echo chamber walls are so thick that when I tell Trump supporters about the warmongering behaviors of their president I am often accused of lying until I provide them with proof of my claims. Even then they still sometimes find a way to compartmentalize and act like they didn’t just view a complete and total refutation of their position.

The other argument I get from those who wish to defend Trump on antiwar grounds is that Hillary Clinton would have been a worse warmonger, and had she been elected we could have seen World War Three ignited by her insanely hawkish plans for Syria. I actually agree on both counts, but that doesn’t mean this is a legitimate argument to make. Hillary Clinton being bad doesn’t make Trump good, any more than the existence of cancer makes it good to have congestive heart failure. Trump is the Commander-in-Chief of the most powerful military force of all time, and the behavior of that military force is what we’re talking about right now. Babbling about some alternate President Hillary timeline is a red herring.

This administration is currently working to extradite Julian Assange and lock him away for life because he exposed US war crimes. It has killed tens of thousands of Venezuelans with starvation sanctions in an attempt to effect regime change in the most oil-rich nation on earth, and many times that number can easily die as a result of the new total economic embargo that Trump signed into law on Monday. It is advancing the longtime John Bolton agenda of regime change in Iran via starvation sanctions, CIA covert ops, and reckless military escalations.

Despite the kayfabe pro wrestling drama of Russiagate, Trump has escalated tensions with Moscow more than any US president since the fall of the Berlin Wall. Leading US-Russia relations expert Stephen Cohen has been warning since 2017 that we are now at risk of nuclear annihilation as a result of these escalations at a level we haven’t seen since the height of the last cold war. This administration’s many, many aggressive acts against Russia include the aforementioned arming of Ukraine, amassing an increasing number of troops near Russia’s border, attacking Russian allies Syria and Venezuela, withdrawing from the INF treaty, implementing a Nuclear Posture Review with a much more aggressive stance against Russia, forcing RT and Sputnik to register as foreign agents, reportedly infiltrating Russia’s power grid, throwing out dozens of diplomats, expanding NATO with the addition of Montenegro, assigning Russia hawk Kurt Volker as special representative to Ukraine, and opposing Russian fossil fuel interests in Germany.

This administration has continued to facilitate the Saudi-led slaughter in Yemen and to sell arms to Saudi Arabia. It has expanded the war in Somalia. It has been inflating the already insanely bloated US military budget to enable more worldwide military expansionism. It has greatly increased the number of bombs dropped per day from the previous administration, killing record numbers of civilians, and reduced military accountability for those airstrikes.

You get the picture. There is no legitimate reason for any thinking person to go on believing that this president is any less of a warmonger than Obama. If we’re lucky he’ll leave office with a lower body count than George W Bush. The narrative that things have changed serves no one but the powerful, and it guarantees that those who believe it will cease fighting for real change. It would be great if Americans could put someone in charge of their military who actually opposes war. To believe that that has already happened is reckless and delusional.

0 thoughts on “The Persistent Myth That Trump Opposes War”