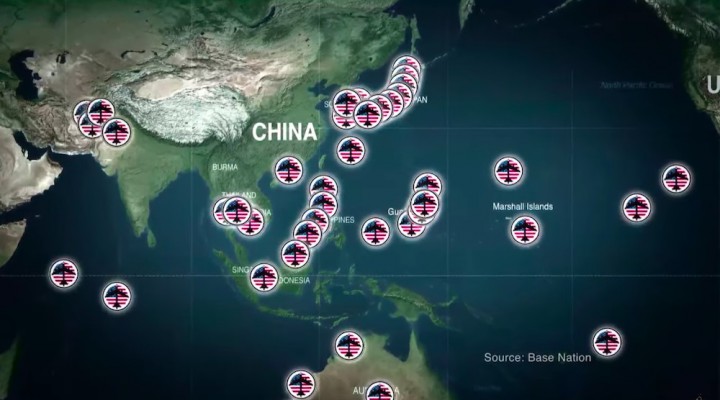 “The aim of this film is to break a silence: the United States and China may well be on the road to war, and nuclear war is no longer unthinkable,” Pilger says in his 2016 documentary The Coming War on China, which you can watch free on Youtube here or on Vimeo here.

“In a few years China has become the world’s second-biggest economic power,” Pilger’s introduction continues. “The United States is the world’s biggest military power, with bases and missiles and ships covering every continent and every ocean. China is a threat to this dominance, says Washington. But who is the threat? This film is about shifting power, and great danger.”

As we’ve been discussing for years now, the relentless quest of the US-centralized empire-like power alliance for total world domination has put it on a collision course with the surging economic powerhouse of China which refuses to be absorbed into the imperial blob. The empire’s continued existence depends upon its ability to undermine China before it grows too powerful or the empire grows too weak to stop its ascent, at which point global hegemony becomes impossible and we are living in a truly multipolar world.

China has therefore always been the final boss fight in the global campaign of violence and domination by what Pilger calls the “empire which never speaks its name”. And the ramping up of anti-China narrative management by the US government indicates that we are being psychologically primed to accept this world-threatening confrontation, just as Pilger warned in 2016.

“The danger of confrontation grows by the day,” Pilger says.

The powerful film breaks down the way the USA has been encircling China with a “noose” of military bases since the Korean War, which all have massive amounts of military firepower, including nuclear firepower, pointed right at China’s cities. Pilger shows the psychopathic toll this has inflicted upon the people who live in the areas where the US war machine has set up shop in the Pacific, including an especially enraging segment on the use of Bikini Atoll natives as human guinea pigs to test the effects of nuclear radiation on people. Also deeply disturbing is the revelation of just how close the US came to launching nuclear warheads at China due to a miscommunication during the Cuban missile crisis.

The film describes China’s recent history and explains its climb in economic power which led us to this point, and the USA’s generations-long history of provocation and hostility toward its government. It also addresses the silly projection so many westerners harbor that if the US wasn’t bullying and slaughtering the world into compliance, China would take over doing the same.

The White House is launching a communications plan across multiple federal agencies that focuses on accusing Beijing of orchestrating a “cover-up” & creating a global pandemic, according to two US officials & a government cable obtained by The Daily Beast https://t.co/3Xjm08G2Mw

Back in 2016 it was harder for people to see this escalation on the horizon, but now in the wake of the COVID-19 pandemic we’re hearing a frantic, disproportionate amount of anti-China sentiment from the Trump administration and its supporters, in the same way we heard Russia hysteria amplified over the last three years by Trump’s enemies. Trump was politically pressured to dangerously escalate cold war tensions with Russia, and he’s now being politically incentivized to pass the blame for his administration’s spectacular failures in addressing this pandemic on to the Chinese government in a way which manufactures support for escalations on that front as well. Two different narratives, same agenda.

“The new president, Donald Trump, has a problem with China,” Pilger says at the end of the documentary. “The urgent question now is will Trump continue with the provocations revealed in this film and take us all to the edge of war?”

The answer to that question appears to be coalescing. It’s a good time for us all to watch this film.