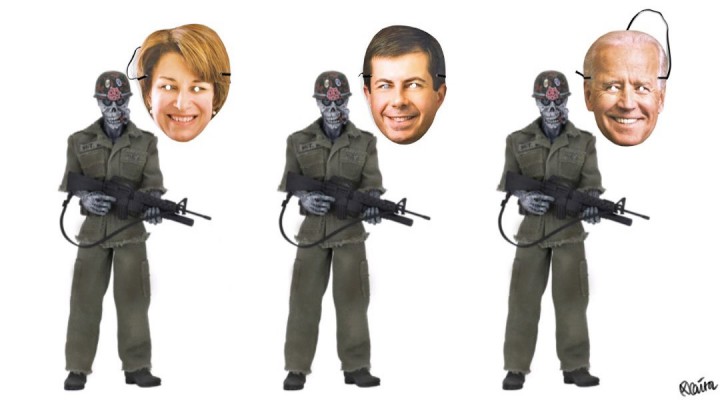 Buttigieg closed at a tight second place behind Sanders and both were awarded the same number of delegates, which with the bizarre Iowa shenanigans means the former South Bend mayor is now leading the pack in total delegates despite receiving fewer votes than Sanders in both states.

So of course “Buttigieg leads” is the information that the mainstream media is placing special emphasis on today.

It is entirely possible that we’ll continue seeing strange electoral results combined with mass media manipulation result in Buttigieg riding a contested convention into a superdelegate-boosted nomination, even if Sanders has more votes overall. We have at this point in time seen no reason to believe that Sanders will be able to secure the number of delegates needed to prevent such an occurrence.

Then you’ve got racist Republican oligarch Mike Bloomberg jumping on the ballot come Super Tuesday, with his $300 million+ ad campaign throwing more chaos into the mix. Billionaire Bloomberg’s unprecedented campaign spending power has enabled him to push up just shy of second place in a recent Quinnipiac national poll despite having no redeeming characteristics and no real goal agenda apart from stopping Sanders, which is as clear an illustration as you’ll ever see of the power of money in US politics.

Whether it winds up being Buttigieg, Bloomberg, or one of their ideological alt-centrist clones like Amy Klobuchar or the floundering Joe Biden, the mainstream narrative will soon converge around one candidate in a very positive way, with the only important qualification being that they aren’t Bernie Sanders. Many powerful people will do everything they can to prevent a Sanders nomination, whose presidency they oppose more than Trump’s. As journalist Matt Taibbi recently pointed out, the Democratic establishment has “every incentive to play every conceivable card. Trillions at stake.”

The primary argument used will be that defeating Trump is all that matters, even if it’s with another racist Republican plutocrat. If they succeed in sabotaging Sanders’ candidacy, he will help advance the same argument, as will a majority of his supporters. This argument will click perfectly in to a foundational assumption that establishment narrative managers have spent the last three plus years reinforcing, namely that once Trump is out of office, everything will be okay.

The premise that everything will be fine once Trump is gone isn’t one people generally say out loud. They don’t even usually think it. But the fact that so many Democrats who were fine with the way their nation was being run on January 19 2017 suddenly became furiously critical of it on January 20th tells you that this assumption is at play. And the relentlessly Trump-centric liberal news media has only reinforced this unexamined assumption.

Things are not going to be okay once Trump is out of office. Do you know how I know this? Because things weren’t okay before Trump got into office. America was a murderous imperialist force whose citizenry were suffering under crushing austerity and steadily mounting authoritarianism on January 19 2017, and it remains so today. Certainly the current administration has added its own levels of nefariousness to this dynamic, but the same is true of its predecessors.

By this stage in his administration Bush had launched two full-scale ground invasions and implemented unprecedented levels of global militarism and Orwellian surveillance, while at the same stage Obama had already overtly destroyed Libya and was working on covertly doing the same to Syria. Trump has continued and expanded all of the most evil agendas of those two administrations and added immensely depraved warmongering elements of his own, but you can’t even rightly argue that he’s done anything quite so evil as what Bush did to Iraq or what Obama did to Libya and Syria. Trump is not the unprecedented presidential horror that the Democratic Party-aligned media spin him as.

Imperialist elites dislike Trump not because he’s a uniquely dangerous president, but because he puts an ugly face on the things they were already doing before he took office and plan to continue doing once he leaves. The reason many rank-and-file Democrats dislike him is similar: he forces them to think about the evil things their nation does.

They don’t actually want to fix any of these problems, they just want to stop thinking about them. They’re not interested in waking up, they just want to get an uncomfortable wrinkle out of their bedsheets so that they can go back to sleep.

John Mulaney does an under-appreciated bit at the end of his famous “There’s a horse in the hospital” routine comparing Trump to a horse running rampant in a medical facility, where he admits he just wasn’t paying attention to what was going on during the previous administration:

Or sometimes they go, “If you’re so mad at the horse, how come you weren’t mad when the last guy did this three and a half years ago? You’re beating up on the horse when the last guy essentially did the same thing five years ago.” First off, get out of here with your facts. You’re like the kid at the sleepover who, after midnight, is like, “It’s tomorrow now!” Get the fuck out of here with your technicalities. Just ’cause you’re accurate does not mean you’re interesting…

But when people say, “How come you were never mad at the last guy?” I say, “Because I wasn’t paying attention.” I used to pay less attention before it was a horse. Also, I thought the last guy was pretty smart, and he seemed good at his job, and I’m lazy by nature. I’m lazy by nature too. So I don’t check up on people when they seem okay at their job. You may think that’s an ignorant answer but it’s not, it’s a great answer. If you left your baby with your mother tonight, you’re not going to race home and check the nanny cam. But if you leave your baby with Gary Busey…

Wanting things to go back to how they were before Trump is wanting things to go back to the conditions which gave rise to Trump. The belief that everything will be peachy keen once Trump is out of office is therefore more dangerous than Trump himself, because it guarantees more Trumps, and it guarantees that the underlying disease of which Trump is a symptom will remain uncured.

Treating a symptom doesn’t cure the disease. Believing that getting rid of Trump will fix America’s problems is like believing cough syrup cures tuberculosis.

The disease is the oligarchic imperialist dystopia which is tormenting millions and controlling billions all around the world. A movement toward health doesn’t look like not having to pay attention anymore, it looks like the exact opposite: becoming fully conscious of all the ugliest and most unpleasant to look at aspects of the thing that America has become. It looks like turning and facing all the bloodshed, genocide, white supremacy, oppression, exploitation, corruption and degradation which form the fibers from which that nation has been woven, deeply ingesting and grokking into their reality, and then healing them completely.

The belief that everything will be fine once the Democrats get rid of Trump is more dangerous than Trump himself.

If the narrative managers succeed in installing Pete Buttigieg or one of his ideological clones, the temptation for millions of Americans will be to go back to sleep. But America won’t be any healthier. The coughing will have stopped, but the tuberculosis will remain. The sociopathic imperialist oligarchy will continue along the exact same trajectory, but the symptom of an oafish, incompetent and ham-fisted president will have been eliminated.

And that’s all any narrative manager ever wants. Their job is to normalize the empire’s depravity and keep its highly profitable murder and exploitation from awakening the masses. That’s why propaganda is so toxic.

I’m not interested in telling Americans whether they should have Trump or some centrist Democrat in office; the odds of four more years of Trump being more disastrous than under President Pete are a toss-up as far as I can tell. But I do wish the malignant belief that eliminating Trump will solve America’s main problems could be expunged from human consciousness forever.

My work is entirely reader-supported, so if you enjoyed this piece please consider sharing it around, liking me on Facebook, following my antics on Twitter, checking out my podcast on either Youtube, soundcloud, Apple podcasts or Spotify, following me on Steemit, throwing some money into my hat on Patreon or Paypal, purchasing some of my sweet merchandiseEle