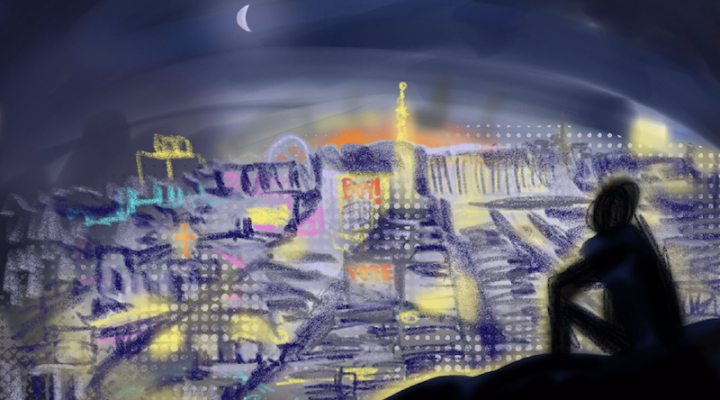 Pretty much all I do here is sit and look at what humanity’s overall problems seem to be and find different ways to point at those problems and talk about them.

The longer I do this, the clearer it becomes that there isn’t actually any separation between the struggle of our species to find a sane way of operating on this planet, and the struggle of the individual to find inner peace. It’s all one unified network of delusion, with threads tracing all the way up to the largest power structures in the world and all the way down into the innermost psyche of every individual.

The deluded psychological fixations of identification, fear and insecurity which drive our personal sufferings are also used by the powerful to manipulate the masses into believing establishment-generated narratives, creating a kind of fractal pattern in which the unhealthiness of the whole resembles in shape and movement the unhealthiness of the individuals who comprise it.

Because this fractal delusion network is a unified whole stretching from the innermost recesses of the individual mind to the outermost reaches of transnational power, any attempt to heal it on any level is also part of an indivisible whole as well. In the same way you can’t separate the action of an individual antibody attacking an individual pathogen from the overall recovery of the entire immune system from a sickness in the body, you can’t separate any personal endeavor to free oneself of any kind of interior misunderstanding from the overall struggle of our species to find a healthy way of relating to each other and to our ecosystem.

I touched on life minus narrative a bit in my last article, talking about how

By life minus narrative I mean the ability to look at life without all the stories about life. Your life minus narrative right in this instant, for example, consists of little more than a pair of eyes gliding over this text, the feel of whatever surface upon which you are sitting, standing or lying, the feeling of whatever device you’re holding, and the sensation of air going in and out of your respiratory system. Everything else, from your name to your personal history to your belief system to how you got to the room you’re in right now, consists of mental narrative.

Full psychological health means having the ability to be in the present moment without any mental narratives. It doesn’t mean you lose the ability to have mental narratives, it just means they don’t babble incessantly without your permission and suck you into belief in the stories they each tell. Narrative becomes a tool you can pick up when it’s useful and set back down when you’re done, so if someone asks you your name and date of birth you can instantly tell them, and if they ask how to get to the supermarket you can easily give them directions, and then when you’re done you go right back into the present moment without any mental narrative arising unbidden to control your experience.

Humanity’s movement into full psychological health, if we ever get there, will look very much the same: as a collective we’ll stop buying into the narratives we’re being fed, and we’ll start seeing things as they are without the narrative overlay. And from there we can use the power of our numbers to force a change into a wholesome relationship with each other and our environment.

You can catch a glimpse of what this will look like for yourself right now. Ignore all the narratives about why things need to be as they are, and you simply see things as they are: resources disappearing from the hands of the many into the hands of the few, weapons of war being spread around the globe, journalists locked in cages for telling the truth, increasing surveillance, increasing police militarization, increasing imprisonment, increasing censorship. That’s world minus narrative. That’s what’s real.

This is what we’re collectively striving to open our eyes to. I don’t know if we’ll make it or not, but if humanity exists on the other side of the drastic changes that are coming in the near future, it will be because we managed to open our eyes in this way.

The Imperial Propaganda Machine: Notes From The Edge Of The Narrative Matrix

CIA, Climate And Conspiracy: More Notes From The Edge Of The Narrative Matrix

0 thoughts on “Life Minus Narrative”