HOME / WORLD / Gaffelighting: Notes From The Edge Of The Narrative Matrix 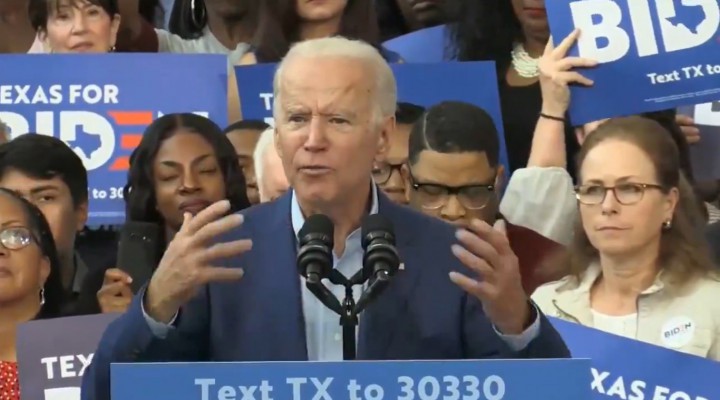 “God that was so awful.”

“Well the good news is the 2020 election can’t possibly go any worse.”

“I mean, the Democrats would have to literally run an actual, clinically diagnosable dementia victim to do any worse in 2020.”

If Biden had been exhibiting these neurological misfirings his entire life, some Media Matters hack would long ago have published a compilation video of the most egregious highlights from his long career. The footage doesn’t exist. There’s footage of Biden saying things that are politically embarrassing in retrospect, there’s footage of him saying things he should have thought through more, and there’s some slight, occasional stuttering that never stood out as abnormal. Nothing like the mess we see today.

The entire 2020 US election may have come down to a race between time and the progression of Joe Biden’s dementia.

I don’t think anyone who is sincere and honest with themselves can truly believe that Biden beats Trump. I know the Democratic establishment doesn’t believe it, and I’m pretty sure rank-and-file Democrats don’t actually believe it deep down in their guts either.

It’s fascinating how much mainstream argumentation amounts to nothing more than screaming DON’T TALK ABOUT THAT at people.

You don’t get to run for the most powerful elected office in the world while exhibiting clear and undeniable symptoms of dementia and just have people not talk about it. That is not a thing. Everyone should be talking about this.

It’s so dumb how many lefties are reluctant to push this. This isn’t mocking some elderly celebrity for developing Alzheimer’s symptoms, this is footage of someone being pushed toward the most powerful elected office in the world while clearly losing his mental faculties. Take control of this story now, or Trump will later.

It’s not wrong to point out that the man the DNC are pushing into a train wreck campaign against Trump has undeniable dementia symptoms. It’s not ableist to say someone running to command the most powerful military in the history of civilization exhibits cognitive decline. Seize control of this narrative before it’s too late.

1 — Break the mainstream silence on Biden’s obvious neurological decline and start an honest, open conversation about it on mainstream platforms,

2 — Wait for Trump to do it. And you know damn well he’ll make it dominate news headlines.

Keep making noise about Biden’s dementia until he either disappears or takes an Alzheimer’s test on live television.

By 2020 we should have been debating which US politician gets the most credit for implementing universal healthcare and which of the green energy systems they implemented have been the most successful. Instead we’re arguing about which politician has the worse dementia symptoms. That’s kinda fucked.

My husband did nursing care for dementia patients for 15 years. He’s followed Biden’s career (he’s American) and his jaw keeps dropping at the ridiculous, gaslighting comments I’ve been getting from Dems saying I’m crazy and Joe is perfectly fine. Joe is not fine. Stop lying.

Some insights into Biden's cognitive decline from my husband Tim, who cared for dementia patients for 15 years. pic.twitter.com/c4xacVybHP

Also liberals: Oh just quit your fussing and vote for Joe. So what if he’s a bit forgetful? You know it’s not like presidents really make the decisions anyway.

Democrats: All that matters is defeating Trump, because he’s a horrifying unprecedented dangerous threat and he’s going to get us all killed.

Those exact same Democrats: Don’t worry about Biden’s cognitive decline, it’s not like it actually matters who the president is anyway.

I actually like Dementia Joe a lot more than I liked Aggressive, Racist, Jingoistic Joe.

His befuddlement gives him a softness that wasn’t there before.

I imagine Dementia Joe would be much more pleasant to spend time with.

At the assisted living facility.

It’s not fine or normal for one of a nation’s only two political parties to pretend it lets the people choose their candidate and then turn around and coordinate to deliberately undermine the candidate with the most public support. Anyone who tells you this is okay is lying.

The only people who hate the media are Trumpsters, Bernie Bros, and people who research facts.

Progressives: Okay, we’ve found a compromise candidate in Bernie Sanders. He’s still too establishment for many of us given our dire circumstances, but we understand it’s important to be pragmatic and —

I’ve been harshly critical of Biden, and as a result I’ve received aggressive online pushback from his supporters, but I’m not going to cry and claim this invalidates Biden’s campaign because that would be manipulative, intellectually dishonest, and breathtakingly stupid.

“And then they ran an actual, literal dementia victim against Trump, losing in a landslide. And that’s why there’s an ice-free Arctic this summer.”

“Why did you let them do that, mommy?”

“Well darling they kept saying we were being very rude, and we didn’t want to offend anyone.”

Calls for civility and politeness are always anti-populist in nature and always arise from the the fear of the ruling class that the commoners can wake up at any moment to their strength of numbers and overthrow them.

The sane response to a large faction of your party’s base becoming angry is to get curious about what’s angering them, come up with a plan of action, and fix it. It’s not to give them a derisive nickname, declare their grievances imaginary, and say their anger is the problem.

Elizabeth Warren is waiting to see which way the wind blows so she can endorse whichever candidate will give her the biggest career boost. She’s just waiting there, biding her time, tasting the wind to see where it’s blowing, with her forked tongue.

Activists, alternative media, and oppositional journalists have a duty to be interesting. If you want to wake people up, you’ve got to get them looking at you. It’s not enough to be smart, informative, and correct. You’ve also got to be catchy, funny, entertaining, and enjoyable.

Not everything the US establishment does is a considered strategic maneuver; often it’s just the frantic, confused flailings of a dying empire. The neocons sold the idea of a last-ditch gambit to shore up unipolarity, and it failed. And now it’s all unraveling in some crazy ways.

If an individual has been caught using a weapon to harm members of society, then society is justified in forcibly disarming that individual in self-defense. This is true whether the individual’s weapon is a knife, a gun, or billions of dollars.

0 thoughts on “Gaffelighting: Notes From The Edge Of The Narrative Matrix”