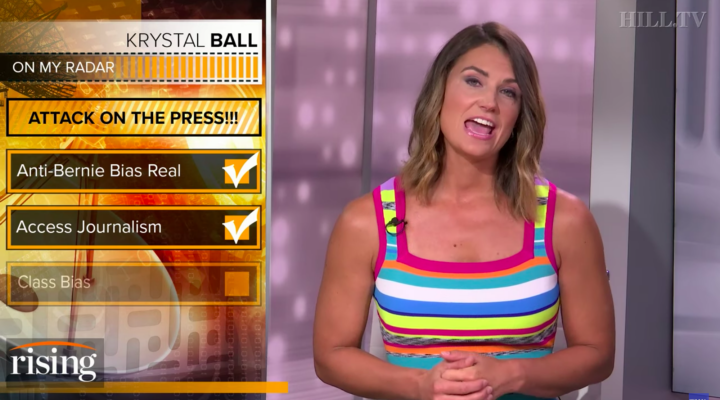 In response to this cartoonish display of billionaire-sponsored performance art, The Hill‘s Krystal Ball and Saagar Enjati aired a segment on their online show Risingwhich is as damning an exposé on the dynamics of mass media empire propaganda as we are ever likely to witness. With startling frankness and honesty, the pair disclose their experience with the way anyone who is critical of the establishment consensus is excluded from mainstream media platforms, as well as the way access journalism, financial incentives, prestige incentives and peer pressure are used to herd mainstream reporters into toeing the establishment line once they’re in.

I strongly urge you to watch the eight-minute segment for yourself, but I’ll be transcribing parts of it as well for those who prefer reading, as well as for posterity, because it really is that historically significant. I will surely be referring back to this segment in my arguments about plutocratic media bias for years to come, because it confirms and validates everything that analysts like Noam Chomsky have been saying about mass media propaganda like nothing else I’ve ever seen. Status quo propaganda is the underlying root of all our problems, and Ball and Enjati have gifted us with an invaluable tool for understanding and attacking it.

After laying out the evidence from some recent examples of bias against Sanders in the mainstream media, former MSNBC reporter Krystal Ball (yes, her real name) asked rhetorically, “Now the question is why?”

“Look, obviously I’ve worked in this industry for a minute at this point and journalists aren’t bad people, in fact, they’re some of my closest friends and favorite people,” Ball said. “But they are people, they’re human beings who respond to their own self-interest, incentives and group think. So it’s not like there’s typically some edict coming down from the top saying ‘Be mean to Bernie’, but there are tremendous blind spots. I would argue the most egregious have to do with class. And there are certain pressures too — to stay in good with the establishment [and] to maintain the access that is the life blood of political journalism. So what do I mean? Let me give an example from my own career since everything I’m saying here really frankly applies to me too.”

“Back in early 2015 at MSNBC I did a monologue that some of you may have seen pretty much begging Hillary Clinton not to run,” Ball continued. “I said her elite ties were out of step with the party and the country, that if she ran she would likely be the nominee and would then go on to lose. No one censored me, I was allowed to say it, but afterwards the Clinton people called and complained to the MSNBC top brass and threatened not to provide any access during the upcoming campaign. I was told that I could still say what I wanted, but I would have to get any Clinton-related commentary cleared with the president of the network. Now being a human interested in maintaining my job, I’m certain I did less critical Clinton commentary after that than I maybe otherwise would have.”

“Every journalist at every outlet knows what they can say and do freely and what’s going to be a little stickier,” Ball said. “No one is ever going to have their anti-Bernie pieces called in to question since he stands outside the system. Their invites to the DC establishment world are not going to be revoked, and may even be heightened by negative Bernie coverage. “

“Back in the run up to 2016 I wanted to cover the negotiations on TPP more,” Ball disclosed a bit later. “I was told though, in no uncertain terms that no one cared about trade and it didn’t rate. To be clear, this was not based on data but on gut feeling and gut feeling that had to influenced by one’s personal experience mixing and mingling with upscale denizens of Manhattan. I didn’t really push it; maybe they were right. Of course TPP and trade turned out to be one of the most central issues in the entire 2016 election. It turns out that people did, in fact, care. Now this class bias translates into bad coverage of candidates with working class appeal, and it translates to under-coverage of issues that are vitally important to the working class.”

Many journalists – either for self-serving reasons or due to genuine befuddlement – are completely misinterpreting Bernie’s media critique. The person who explained it most clearly was Noam Chomsky in this 90-second answer to an equally confused BBC host. This will clear it up: 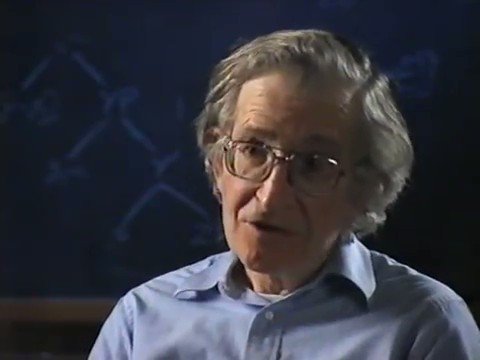 2,484 people are talking about this

Ball’s co-host Saagar Enjati went on to describe his own similar experiences as a White House correspondent.

“I’ve definitely noticed this in the White House press corps, which is a massive bias to ask questions that make everybody else in the room happy, AKA Mueller questions,” Enjati continued. “Guess what the American people don’t care about? Mueller. So when you ask a question–I’ve had this happen to me all the time. I would ask a question about North Korea, like, you know, war and nuclear weapons that affect billions. Or I would ask about the Supreme Court, the number one issue why Trump voters voted for President Trump, and I would get accused of toadying to the administration or not asking what Jim Acosta or whomever wanted me to ask. It’s like, you know, everybody plays to their peers, they don’t actually play to the people they’re supposed to cover, and that’s part of the problem.”

“Every time I took that message to ask Trump a question, I knew that my Twitter messages were going to blow up from MSNBC or Ken Dilanian or whomever for ‘toadying’ up to the administration, and it takes a lot to be able to withstand that,” Enjeti concluded.

As we just discussed the other day, Ken Dilanian is literally a known CIA asset. This is not a conspiracy theory, it’s a well-documented and historically undeniable fact, as shown in this Intercept article titled “The CIA’s Mop-Up Man”. The testimony that Dilanian’s establishment sycophancy affects not just his own reporting but those of other reporters as well via strategically placed peer pressure is highly significant.

For obvious reasons these insider confessions are as rare as hen’s teeth, so we must absorb them, circulate them, and never forget them. I’m still floored and fall-to-my-knees grateful to Ball and Enjati for putting this information out there for the sake of the common good. Our task is now to use the information they provided to help wake people up from the narrative control matrix.