HOME / SOCIAL/CULTURAL / China, QAnon Censorship, And Other Notes From The Edge Of The Narrative Matrix 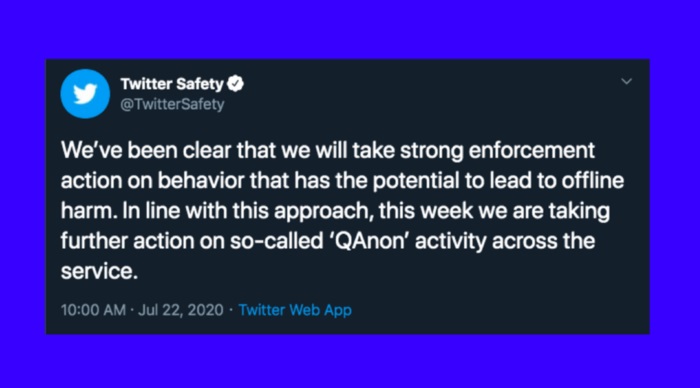 QAnon is one of the most annoying things on Twitter and its followers are morons. And, also, it is dangerous and unacceptable that monopolistic Silicon Valley tech plutocrats are exerting more and more control over human communication.

I criticize QAnon constantly and find its acolytes intensely irritating. And, also, I don’t want monopolistic tech billionaires paternalistically protecting my fragile little mind from them.

In a corporatist system of government, where few meaningful distinctions exist between corporate power and state power, corporate censorship is state censorship. Permitting such a thing, to any extent, is extremely hazardous for the future of human development.

The dawn of political insight is when you realize propaganda isn’t just something that is done by other countries and other political parties.

Step 1: Foment violent extremism in a key geostrategic region you want to control.

Step 2: Wait for the government of that region to respond to extremism.

Step 3: Spin their response as unprovoked tyranny, tell the world interventionism is required to prevent another Holocaust.

Q: What does “tankie” mean?

A: “Tankie” is a noise you make when you want to avoid contemplating the uncomfortable possibility that someone else might be less MSM-brainwashed on foreign policy than you are.

Q: What is China?

A: China is a large Asiatic nation which westerners use as an emotional punching bag for their capitalism-induced rage, propaganda-induced confusion, and fears about the death of the US empire.

Believing China wants to take over your country, censor your internet and give you a social credit score is exactly the same sort of foam-brained othering which told previous generations that black men want to take over your neighborhood so they can have sex with your wives.

“I guess you don’t realize this Caitlin, but it’s actually possible to be critical of the US government and mindlessly regurgitate CIA narratives about China,” said the Smart Internet Person. “It’s called being fair and balanced.”

US conservatives whose precious religion admonishes them to “remove the plank from thine own eye” are obsessed with China, a nation on the other side of the planet whose alleged misdeeds are far less egregious than those of their own country.

If your attempts to fight tyranny help advance the planet-dominating agendas of the most powerful government on earth, then you’re not fighting tyranny. You’re facilitating it.

Troops that are stationed outside a nation’s borders are just glorified mall cops. They’re not defending people, they’re guarding resources and commercial interests. They’re an army of Paul Blarts.

In studying the secretive behaviors of global power structures it’s important to be honest with yourself about what you know and what you don’t know. My experience in such discussions is that people generally know a lot less than they pretend to know. It’s okay to just not know.

They concentrate all the power in these tiny little elitist circles, then say “You don’t get to know what we’re doing with all our power over here. Not only that, but you don’t even get to talk to each other about what we might be doing, even though it could directly affect you.”

How crazy is that? At the very least don’t play along with them and police each other about it on top of that.

It’s fine to discuss and debate the validity of individual theories (I do it all the time), but to complain about the fact that people form theories about possible conspiracies when we know for a fact that powerful people conspire is just infantile.

Talk about revolutionary changes you want and there’s always people going “I agree, but that’s taking it a bit too far.” It’s like mate, people aren’t even moving in that direction yet, let alone at risk of taking things too far. You’re creating inertia for literally no reason.

Just push for exactly what you want and not one iota less. Don’t reel it in because you’re worried you’re being excessive or not being “realistic” or whatever. Don’t come to the negotiation table with your compromise. Come with a clear idea of exactly what you want, and then add fifty percent more for good measure. There are people whose entire job is to push you backward, don’t do their job for them. Make them push you back, and make them fight for every inch.

The reason you can find revolutionary writings from generations ago indistinguishable from those of today is because their insights are simple and complete. Nothing more was required. All that needed to change, and still needs to change, is the inertia against actualizing them.

Like so much else, this is mirrored in the inner journey: you can have a major epiphany, think it’s going to change your life, then stay stuck in the same patterns for years. The insight will keep resurfacing, but the inertia against actualizing it will prevent really changing.

But then, one day, you’ll recall that insight you’ve had many times before, and it will land in a different way. And then something will shift, and actual changes will be made. We can expect to see this in our society as well. We’ll make the changes we’ve long known are needed.

May empathy become the new currency. May humanity become so compassionate and empathy-driven that severe mental illness is no big deal since you’ll get all the help you need, but being psychopathic or sociopathic is a severe handicap in which the inability to empathize sticks out to everyone like a sore thumb.

Spirituality, the real kind, is just a matter of getting curious about what’s actually going on with your own inner processes and your own consciousness, and hopefully finding some answers in your own direct experience. It’s nothing more out there or extraordinary than that.

0 thoughts on “China, QAnon Censorship, And Other Notes From The Edge Of The Narrative Matrix”