HOME / SOCIAL/CULTURAL / Assange Is Reportedly Gravely Ill, And Hardly Anyone’s Talking About It 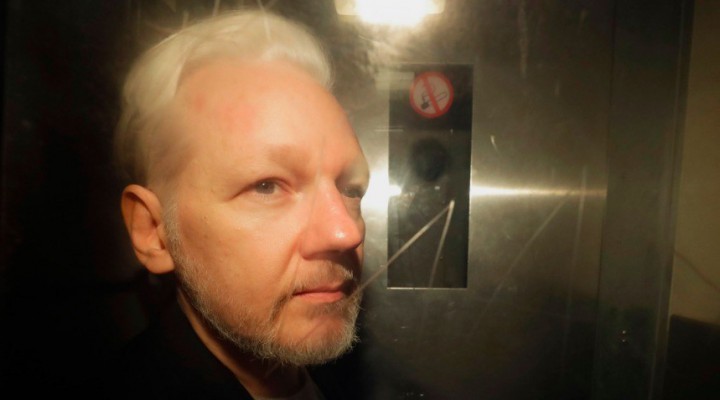 Julian Assange’s Swedish lawyer Per Samuelson has told the press that “Assange’s health situation on Friday was such that it was not possible to conduct a normal conversation with him.”

This jarring revelation has been reported by a small handful of outlets, but only as an aside in relation to Sweden refusing Samuelson’s request for a postponement of a scheduled hearing regarding Assange’s detention in absentia for a preliminary investigation of rape allegations. The fact that the imprisoned WikiLeaks founder is so ill that he can’t converse lucidly is itself far more significant than the postponement refusal, yet headlines mentioning Samuelson’s statement focus on the Swedish case, de-emphasizing the startling news from his lawyer.

As of this writing I’ve been able to find very few news outlets reporting on this at all, the most mainstream being a Reuters article with the very tame headline “Swedish court rejects delay of Assange hearing over ill-health: lawyer“. The Sydney Morning Herald also covered the story without even mentioning illness in headline, instead going with “Swedish court rejects effort to delay Assange hearing“. The much smaller alternative media outlet World Socialist Website has been the only outlet I’ve found so far which reports on Samuelson’s statement in anything resembling its proper scale, publishing a good article titled “Despite Assange’s ill-health, Swedish court rejects delay to hearing” a few hours ago.

This news has been so under-discussed and under-appreciated as of this writing that I didn’t find out about it until hours after the story broke, and I’m very plugged in to both alternative media commentary and WikiLeaks-related news. A report that Julian Assange was so sick he could barely speak all the way back on Friday and we still have no news about how he’s doing now should be hugely significant for everyone who cares about Assange, press freedom, government transparency or peace activism.

Another part of this story which has gone completely uncovered in all English-language media as of this writing is the news that Assange has actually been transferred to the hospital wing of Belmarsh prison. This was reported by the Swedish outlet Upsala Nya Tidning, a newspaper published in the same district court Assange is scheduled to call in to for his hearing. The report was also based on a statement to the press by Per Samuelson.

The article reports the following, per machine translation:

“Wikileaks founder Julian Assange’s Swedish lawyer wants the arrest hearing on Monday in Uppsala to be postponed. According to the lawyer, who has now visited his client in British prison, Assange is admitted to the medical department and was unable to make a call.

“Last Friday, Assange’s Swedish defender, lawyer Per E Samuelson, visited his client in prison. In a letter to Uppsala District Court, the lawyer says that they met for just under two hours. According to the lawyer, Assange’s state of health at the meeting was such that ‘a normal conversation with him was not possible’. Julian Assange is said to have been taken to the prison’s ward, but there is no more detailed information about his state of health.”

This story was picked up from Upsala Nya Tidning by Danish new agency Ritzau and published in the outlet Politiken, with the title (per machine translation) “Weakened Assange hospitalized in London prison: ‘Impossible to have a normal conversation with him’”. These news outlets are to my understanding as reputable as any other mainstream western outlet, yet they remain the only publications I’ve been able to find which are reporting that Assange has been hospitalized. This is absolutely bizarre.

I’ve emailed Per Samuelson with a request to confirm the news that Assange has been hospitalized. I’ll update this article if I hear back.

For Assange’s supporters, one of the many frustrating things about his imprisonment has been the way he’s been cut off from the usual means which used to be used to inform the public about his well being. It used to be that news reports could be easily confirmed or refuted by people who had consistent access to Assange in some way by sources like the WikiLeaks Twitter account, but the people who operate that account don’t have ready access to him anymore. Now we’re seeing all sorts of rumors circulating about how Assange is faring in prison, and it gets difficult to sort out fact from fiction. It appears that it would be difficult to find a more reliable source on the state of his health than his own lawyer, however.

He needed urgent assistance after his expulsion from the Embassy. Instead, he was not allowed to receive adequate medical treatment. In the case of Emin Huseynov (1 y @ Swiss Embassy) it took at least a month of treatment to go back to normal. Imagine after 7 years! Brutal. https://twitter.com/SMaurizi/status/1133499740086296576 …

following the press reports on Julian #Assange‘s health, I just heard he is very unwell and I am seriously concerned. It’s a real scandal how his health has been seriously undermined by #arbitrarydetention by #Sweden and the #UK. I will NOT be silent

It has long been an established fact that Assange was in failing health while trapped in the Ecuadorian embassy in London; doctors who visited him published an article with the Guardian in January 2018 titled “We examined Julian Assange, and he badly needs care – but he can’t get it“. Renata Avila, an activist and author who has worked with and written about WikiLeaks, tweeted in response to the new revelations, “He needed urgent assistance after his expulsion from the Embassy. Instead, he was not allowed to receive adequate medical treatment. In the case of Emin Huseynov (1 y @ Swiss Embassy) it took at least a month of treatment to go back to normal. Imagine after 7 years! Brutal.”

We have been watching the slow-motion assassination of Julian Assange. They have been choking him to death by tactical psyops, siege tactics, and wilful neglect as surely as if they placed a noose tied around his neck, not just in Belmarsh Prison but in the embassy as well. The only difference between his execution and someone on death row is the same as the difference between covert and overt warfare, which makes sense because the intelligence, judicial and military agencies who are carrying out his death sentence operate within the same power structure which carries out war. First came the smears (propaganda), then came the siege (sanctions), and they staged their coup (dragged him out of the embassy) and now they’ve got him in their clutches and they can do what they want behind closed doors. That’s how you kill a nation while still looking like a nice guy, and that’s how they’re killing Assange.

Shout this from the rooftops. Whether this media blackout is self-imposed or perhaps the result of the malicious use of a D-notice, we have to use everything in our power to get this information into the mainstream, and get people asking questions of the press and their local members about what the Dickens is going on in Belmarsh prison right now. Assange’s life may depend on it.

UPDATE: WikiLeaks editor-in-chief Kristinn Hrafnsson has confirmed that Assange has been transferred to the health ward of Belmarsh prison, and that his health has been steadily deteriorating since his imprisonment. 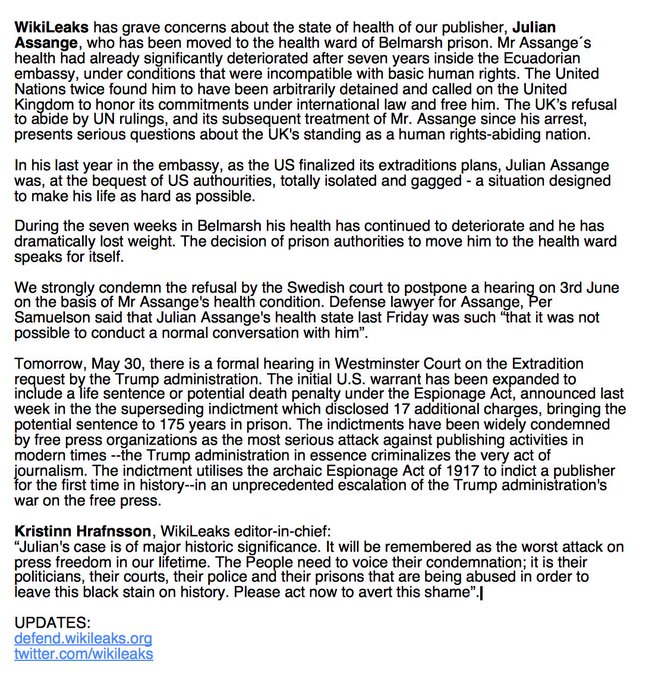 WikiLeaks has grave concerns about the state of health of our publisher, Julian Assange, who has been moved to the health ward of Belmarsh prison. – See full statement:

0 thoughts on “Assange Is Reportedly Gravely Ill, And Hardly Anyone’s Talking About It”