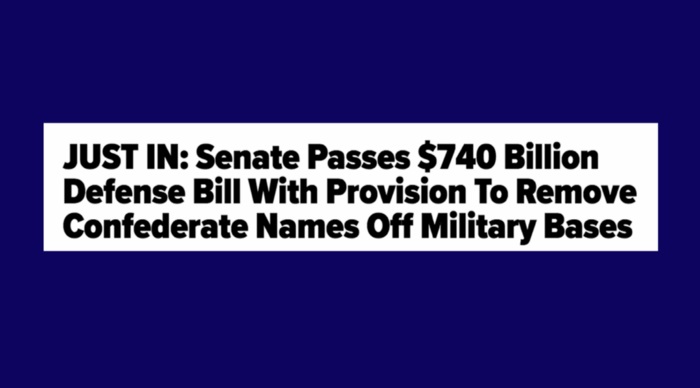 “JUST IN: Senate Passes $740 Billion Defense Bill With Provision To Remove Confederate Names Off Military Bases” reads a headline from the digital news site Mediaite, which could also serve as a perfect diagnosis for everything that is sick about mainstream liberal orthodoxy.

The Democrat-led House and Republican-led Senate have now both passed versions of this bill authorizing three-quarters of a trillion dollars for a single year of military spending, both by overwhelming bipartisan majorities, on the condition that the names of Confederate Civil War leaders be removed from military bases.

Unsurprisingly, Security Policy Reform Institute’s Stephen Semler found a direct relationship between how much a House Democrat has been paid by the war industry and how likely they were to have voted for the bloated military budget which also obstructs any attempts to scale down troop presence in Afghanistan.

I recorded how much each House Democrat took from the defense industry so far in the 2020 election cycle and compared it to how they voted on the #NDAA and @repmarkpocan's amendment.

Results are unsurprising and yes it's about class (warfare): https://t.co/fGWz4PGiFk

This is everything that is horrible about the Democratic Party and the ideological position of mainstream liberals. Their leaders have figured out a way to trade hard objects for empty narrative. To get people to consent to almost limitless amounts of thievery, murder and exploitation in exchange for words and stories.

They’ll get rid of Confederate names on bases, but they won’t even slightly reduce the vast fortunes they’re stealing from an impoverished populace and pouring into global slaughter and oppression. They’ll kneel wearing Kente cloth, but they won’t even think about dismantling the US police state. They’ll say “I hear you, and that’s something we’re looking at,” but they’ll never intervene against plutocrats funnelling money away from the needful to add to their unfathomably vast fortunes. They’ll call you whatever gender pronoun you like, but they’ll never do anything to inconvenience the oligarchs and warmongers.

They’ll still make you fight tooth and claw for each empty concession, because otherwise they’d be devaluing the empty, imaginary currency they’re trading you in exchange for the concrete things they want. But in the end there is no amount of narrative the powerful won’t swap out for actual policy changes of substance, because narrative in and of itself has no value. Manipulators understand this distinction with crystal clear lucidity. Their victims do not.

In reality it would be a lot more truthful and authentic for the bases within the US war machine to continue to bear the names of racists, killers and oppressors, since these embody the values of that war machine far better than anything with a more pleasant ring to it. As long as you’re robbing the American people to murder brown-skinned foreigners for corporate interests and geostrategic resource control, you might as well have names which reflect such values on your war machinery.

So I say keep the Confederate names on the bases. Hell, add more of them. Add the names of Nazis, genocidal warlords and serial killers too while you’re at it. It’d certainly be a lot more honest and accurate to have a Fort Jeffrey Dahmer as part of America’s murder machine than a Fort Colin Kaepernick.

Kind of weird that House passes obscene $740 billion Pentagon budget when we desperately need $ for healthcare, not warfare, and controversy just focuses on confederate names for military bases, not $ for permanent war economy. https://t.co/w1kk35b4uk

War is the single worst thing in the world. It is the most evil, insane, counter-productive, wasteful, damaging, kleptocratic and unsustainable thing that human beings do, by a very wide margin. If Americans could viscerally experience all of the horrors that are inflicted by the war machine their wealth and resources are being funneled into, with their perception unfiltered by propaganda and government secrecy, they would fall to their knees screaming with abject rage. They would be in the streets immediately forcing an end to this unforgivable savagery. Which is exactly why America has so much government secrecy and propaganda.

If Americans could see with their perceptions unmanipulated, their response to the news that $740 billion is being stolen from the American people by a sociopathic murder machine in exchange for removing the names of Confederate leaders from its bases would not be “Oh good, maybe we’ll get a Fort Harriet Tubman!” It would be rage. Unmitigated, unforgiving rage. Which is all the status quo deserves. Which is all the Democratic Party exists to prevent.

Why So Few American Muslims Serve in the US Military

0 thoughts on “A Headline That Perfectly Encapsulates Mainstream Liberalism:”