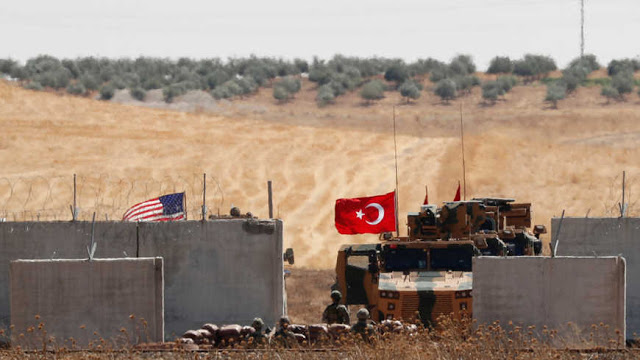 Turkey is at a pivotal moment where it can chose to help end the war or take on the torch of Washington’s failure.

US troops are in the middle of an apparent withdrawal from Syria’s northeast.

This leaves the door open to a variety of possibilities – the most dangerous being Turkey having cut a backroom deal with Washington to occupy eastern Syria.

The most ideal being Turkey having reached an agreement with Moscow and Damascus to create a temporary buffer zone – handing control incrementally over to the Syrian government until Ankara’s security concerns regarding Kurdish fighters are fully addressed.

Which possibility along this spectrum turns out true – time will soon tell.

The moment Russia intervened in Syria the US proxy war to divide and destroy the nation was effectively derailed. Syrian forces with the backing of Russian air power and under the umbrella of Russia’s political support – first stopped – then rolled back US-Saudi-Turkish backed proxies.

Russia’s military presence in Syria also confined the expansion of US military aggression within and along Syria’s borders. While Russia’s resolve was repeatedly tested, it never broke and thus Washington’s only options were to either wait for its proxy war to fade or trigger a much more serious conflict directly with nuclear-armed Russia itself.

The defeat of the bulk of America’s proxy forces – primarily Al Qaeda, the so-called “Islamic State” (ISIS), and their various affiliates – left Washington with only its Kurdish proxies.

The idea of creating a sustainable Kurdish “statelet” in Syria’s sparsely populated east was always unrealistic. The vast majority of Syria’s most populated cities along with their economic power reside either west of the Euphrates or directly on its eastern bank – most of which are fully controlled by the Syrian government.

A Syrian “Kurdistan” would have been an entirely artificial construct, propped up entirely by the US militarily, politically, and economically. Despite the region’s vast resources – a separatist “Kurdistan” would have been cut off from its traditional markets in western Syria – cut off from any prospect of trade via Turkey – and left with unpredictable prospects via Iraq.

Syrian Kurds attempting to carve off Syrian territory would never possess the economic and thus political or  military power required to stand on their own. With Russia’s long-term and very sustainable position to the west of the Euphrates – no US proxy however strong would be able to reverse the outcome of America’s failed regime change war.

A Turkish occupation of Syria’s east would be much more sustainable than a US-backed “Kurdistan.”

Turkey – upon consolidating hordes of leftover extremists from 8 years of US-led proxy war – would possess a sizable mercenary force for controlling large swaths of territory along the Syrian-Turkish border. Moving refugees into these regions could possibly transform regional demographics in Turkey’s favor.

However, this would require vast amounts of resources from Turkey. While it is “more sustainable” than a US-backed “Kurdistan” it still falls short of being sustainable in and of itself. It would also put Turkey at odds with Syria and its allies – including Russia and Iran.

Syria and its allies have prevailed in this conflict because they pursued a vastly more sustainable strategy – holding together an existing nation-state with existing, functional institutions, along with an existing economy – however tattered by war they may be.

In order to invade and displace the Syrian state – the US and its allies are required to expend vast amounts of resources creating new institutions, rebuilding local economies then connecting them with alternative markets, rebuilding and maintaining infrastructure, and all other matters required to administer territory in the long-term.

Idlib is a case study of just how difficult it is to accomplish all of this – and if Idlib still exists today as a dysfunctional and precarious foothold – with Syrian forces having already worked their way into the governorate – even by-passing Turkish forces along the way – the prospect of Turkey succeeding in any of this east of the Euphrates is less likely still.

Despite the difficulty of administering Idlib, it at least had preexisting demographics that worked in Turkey’s favor. East of the Euphrates, Turkey faces all the challenges it did in Idlib with the addition  of overcoming concentrations of ethnic Kurds.

For Turkey – the vast amount of resources required to transform its border with Syria into a dysfunctional buffer zone may seem like an attractive option to finally solve its “Kurdish problem,” yet removing people is rarely an effective solution to any problem.

The Kurds will simply relocate and continue their perceived struggle from elsewhere. Only a deal – most likely reached in partnership with the Syrian government – can guide Kurdish militants away from armed separatism and toward constructively contributing to whatever country they reside in.

Turkey’s Choice: Ending the War or Taking on the Torch of US Failure

Ultimately – Turkey faces a conflict that is not concluding in Washington’s favor and efforts by Washington to hand the torch of this failure over to Ankara – either through a backroom deal or through the baited trap of storming the Kurds – come with it only negative consequences.

Russia is in Syria indefinitely – even if after the conflict comes to an end and it reduces the size of its force there. Russia’s investment in Syria is an indefinite and insurmountable wall standing in the way of all future regime change wars. Russia along with Iran have become formidable power brokers in the region – meaning that Turkey’s actions in Syria will always unfold under the scrutiny of not only Damascus but also of Moscow and Tehran.

For Turkey – the most sustainable option is to broker a deal with Damascus and its allies regarding the Kurds. The door of diplomacy has been left wide open by Moscow and Tehran – offering Ankara the same sort of sustainable strategy into the future Syria and its allies used to overcome America’s proxy war.

Only time will tell if Turkey decides to walk through that door.

0 thoughts on “Turkish Incursion into Syria: US Abandons Kurds”