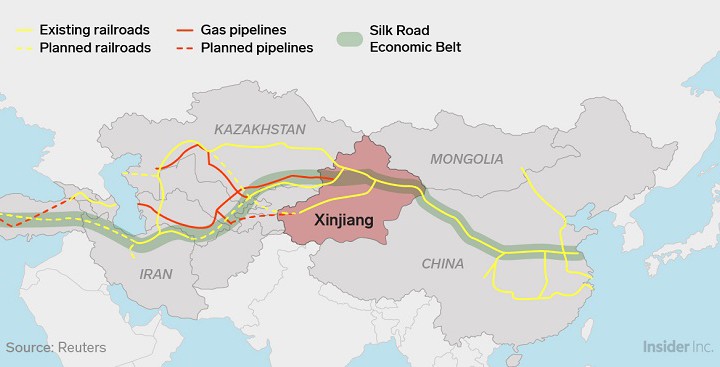 As part of a larger, concerted effort to encircle and contain China, an ongoing disinformation campaign has been waged by the Western media against Beijing’s massive global infrastructure building spree known as the Belt and Road Initiative (BRI).

A recent and particularly appalling example of this comes from a Business Insider article titled, “This map shows a trillion-dollar reason why China is oppressing more than a million Muslims.”

The article has been widely circulated by the Western-funded fronts cited in the article itself, including Human Rights Watch (HRW) whose executive director – Kenneth Roth – would claim in a social media post:

China’s mass detention of Uighur Muslims is driven [not] only by Islamophobia but also by the centrality of their Xinjiang region to China’s Belt and Road Initiative.

Claims that Chinese policy is “driven by Islamophobia” are particularly absurd. China’s closest ally and partner in the region is Pakistan – an undoubtedly Muslim-majority nation. Roth never explains why the BRI’s “centrality” would drive “mass detentions” in Xinjiang when Chinese infrastructure projects elsewhere – both within China and abroad – including across Muslim-majority Pakistan – do not feature nor necessitate such “detentions.”

Beijing has been cracking down on Uighur life in on Xinjiang. Officials say its repression is a necessary counter-terror operation, but experts say it’s actually to protect their BRI projects.

These “experts” never explain why Beijing officials would feel the need to “protect their BRI projects.” Nor do they explain from whom they need protection. The obvious explanation is in fact that – as Beijing has stated – Xinjiang faces a significant terrorist threat.

A minority among Xinjiang’s Uyghur population has undoubtedly been radicalized and has carried out scores of high-profile terrorist attacks across not only Xinjiang, but across all of China in recent years.
A Reuters article published by Business Insider in 2014 titled, “Knife-Wielding Attackers In Chinese Train Station Leave 27 Dead, 109 Injured,” details just one of many attacks carried out by Uyghur extremists.

A 2015 Reuters article also published by Business Insider confirms that the attackers were in fact Uyghur terrorists. The train station located in Kunming is over 2,000 miles from the Xinjiang region – illustrating the reach of the terrorist threat Beijing is dealing with.

Despite these previous – well-known admissions – published by Business Insider itself – the media platform as well as many others, alongside fronts like HRW unashamedly feign ignorance over China’s very real security concerns in Xijiang today.

China’s government has for years blamed the Uighurs for a terror, and say they saying the group is importing Islamic extremism in Central Asia.

But there’s another reason why Beijing wants to clamp down on Uighurs in Xinjiang: The region is home to some of the most important elements of the Belt and Road Initiative (BRI), China’s flagship trade project.

Here – Business Insider deliberately inverts cause and effect – claiming China is cracking down on Uyghurs simply because vital segments of its BRI project pass through Xinjiang – instead of cracking down because of very real terrorism threatening an obviously essential economic corridor.

And as Business Insider’s own map reveals, China’s BRI passes through many other regions inside China and beyond – including regions dominated by Muslim communities absent of similar tensions.

It is clear that Business Insider, HRW, and others are deliberately mischaracterizing China’s policies in Xinjiang and misrepresenting the root cause of Uyghur extremism. But even the article itself admits a very real security threat, stating:

China has accused militant Uighurs of being terrorists and inciting violence across the country since at least the early 2000s, as many Uighur separatists left China for places like Afghanistan and Syria to become fighters.

US State Department-funded and directed Voice of America (VOA) in an article titled, “Analysts: Uighur Jihadis in Syria Could Pose Threat,” would admit (emphasis added):

The article also admits that up to 3,000 militants may have fought for TIP in Syria and warned of the possibility that these militants might transfer their fighting skills back to China.

Such admissions – even from official US state media operations – help expose the current disinformation campaign targeting Beijing for supposed “repression,” and means that Western special interests – including the US government itself – are at the very least undermining China’s legitimate counter-terrorism efforts.

US is Intentionally Fomenting Violence in Xinjiang to Disrupt the BRI

But clues even in Business Insider’s own article reveal US support for undermining Chinese internal security goes far beyond mere disinformation.

Among the “experts” Business Insider cites includes Rushan Abbas described by the article as a “Uyghur activist in Virginia.”

What the article intentionally omits is that Abbas is actually a long-time employee and contractor of the US government – admitting in her own biography posted by a Washington DC-based consulting firm she works for, that:

She was also employed at L-3, as a consultant at Guantanamo Bay, Cuba, supporting Operation Enduring Freedom during 2002- 2003 and as a news reporter at Radio Free Asia.

Ms. Abbas has also worked as a linguist and translator for several federal agencies including work for the US State Department in Guantanamo Bay, Cuba and for President George W. Bush and former First Lady Laura Bush.

Her claims that family members were abducted due to her US-based “activism” fit into a pattern of fabricated human rights “outrages” used to paint targets of US coercion and aggression in the worst possible light.

Abbas is just one of many working out of Washington DC to support what is openly US-backed Uyghur separatism in Xinjiang.

The National Endowment for Democracy (NED) – a US government-funded organization dedicated to political interference worldwide – has an entire page dedicated to “Xinjiang/East Turkistan” – East Turkistan being the state Uyghur extremists seek to carve out of territory recognized under international law as China.

Subversive organizations openly promoting separatism such as the World Uyghur Congress (WUC) also maintain offices in Washington DC and receive money and support directly from the US government.

Also a poorly guarded secret is the extensive amount of US arms, equipment, money, and other material support provided to terrorists waging war against the Syrian government – among which include Uyghur terrorists as admitted by VOA itself.

From Washington DC, to the battlefields of northern Syria, to Xinjiang itself – the US is openly cultivating a vast terrorist threat to pose as a significant roadblock to China’s BRI.

Is the public really meant to believe a state-sponsored terrorist threat aimed at crippling a multi-trillion dollar economic corridor is not reason enough for Beijing to launch an extensive counter-terrorism campaign? Not only is Washington fomenting terrorism in western China, it is attempting to cripple Beijing’s internal security operations in response to it – all by leveraging and abusing human rights advocacy and portraying the victim of US-sponsored terrorism as a culprit.

That all of this context was intentionally omitted from Business Insider as well as by Kenneth Roth of Human Rights Watch proves that the West is waging war against China and its economic expansion not only on the ground from Washington to Syria to Xinjiang, but all across information space as well.

The New Silk Roads reach the next level