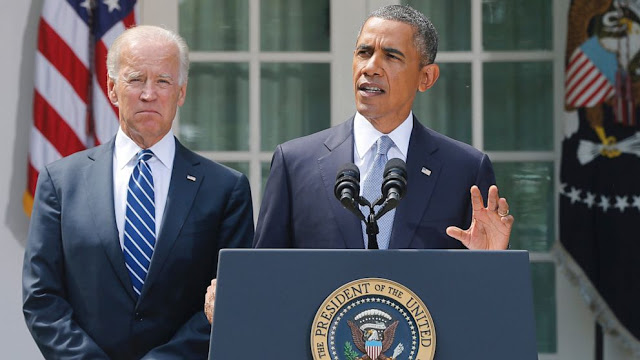 US President Donald Trump famously took a hardline approach against Iran – withdrawing the United States from the Joint Comprehensive Plan of Action (JCPOA) – or the “Nuclear Deal” – and opting instead for a policy of “maximum pressure” against Iran diplomatically and economically.

But there is a major misconception that the previous administration of former US President Barack Obama and then Vice President Joe Biden – had somehow sought to resolve US-Iranian tensions and offer Iran an opportunity to escape out from under decades of economic sanctions imposed by one US administration after another.

In fact – the US strategy regarding Iran required by necessity a feigned rapprochement – via the “Nuclear Deal” – followed by a sharp and hostile pivot aimed to make Iran appear unreasonable in the face of attempted peace offered by Washington.

This two-part strategy was planned during the administration of US President George Bush and executed by the Obama and Trump administrations respectively.

Far from mere speculation – this strategy was laid out in an extensive 2009 policy paper published by the Brookings Institution – a prominent US-based think tank funded by the largest, most powerful corporate-financier interests in the West.

The paper titled, “Which Path to Persia?: Options for a New American Strategy Toward Iran” (PDF),” stated explicitly (emphasis added):

..any military operation against Iran will likely be very unpopular around the world and require the proper international context—both to ensure the logistical support the operation would require and to minimize the blowback from it. The best way to minimize international opprobrium and maximize support (however, grudging or covert) is to strike only when there is a widespread conviction that the Iranians were given but then rejected a superb offer—one so good that only a regime determined to acquire nuclear weapons and acquire them for the wrong reasons would turn it down. Under those circumstances, the United States (or Israel) could portray its operations as taken in sorrow, not anger, and at least some in the international community would conclude that the Iranians “brought it on themselves” by refusing a very good deal.

For the policy to be executed within the current political environment in the United States – it required one administration operating under liberal left cover – and another under a more hardline right-leaning cover.

The paper having been published in 2009 and the policy laid out in it executed over the course of the following decade illustrates the continuity of agenda in Washington regardless of who is elected into office – and how corporate interests – not the American people or even the rhetoric of their elected representatives – drive US foreign policy.

And even when the Obama administration extended its feigned “Nuclear Deal” to Iran – it had deliberately engineered proxy war in Syria aimed directly at one of Iran’s closest regional allies.

Thus – at the same time the US posed officially as seeking peace with Iran – its proxy war funded, armed, and provided military support for militant groups killing both Syrian forces allied to Iran and Iranian forces attempting to aid in the protection and restoration of order in Syria.

In essence – US war in Syria was defacto war by proxy against Iran. The same could be said of US support for Saudi Arabia and its unrelenting destruction of neighboring Yemen – a war the US provides Saudi Arabia weapons, training, logistics, intelligence, and even its own special forces to aid and abet Saudi forces inside Yemen.

Unless the weapon manufacturers, banks, oil companies, and other interests driving US foreign policy particularly in regards to Iran have for some reason changed their motivations and objectives regarding the Middle East – this agenda will continue uninterrupted under a Biden administration. And it’s quite clear the prevailing foreign policy circles in Washington still desire containment and even regime change in Iran.

For Iran – who surely has “noticed” this pattern of enduring American belligerence from one administration to the next – it will most likely continue operating under the assumption that genuine peace will not be offered to it by Washington and is instead a condition Iran and its own policies must impose upon Washington and its presence in the Middle East and Central Asia regions by leaving the United States no other viable option.

0 thoughts on ““Biden’s America” Will Continue Pressure on Iran”