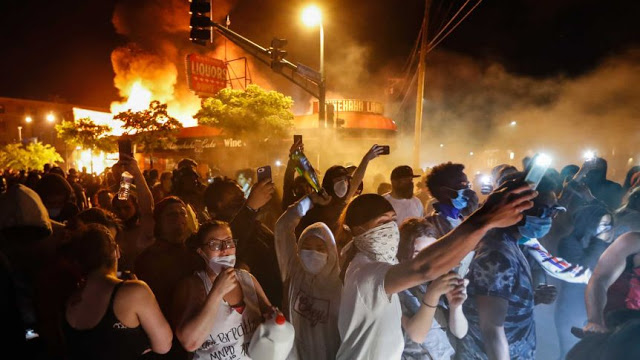 Empire has one trick – divide and conquer. When it runs out of territory, nations, and people abroad to consume, it turns inward on itself.

The United States finds itself in a less-than-unique position of an empire in terminal decline. With nations around the globe standing up economically, militarily, and politically – closing off once lucrative avenues of exploitation – the US finds itself turning more and more inwardly upon its allies and even its own population – either to wring from it whatever wealth it can or at the very least – to prevent the displacement of America’s current ruling special interests by any sort of alternative.

No matter what people thought they were going into the streets for – for a nation adept at engineering revolutions abroad – there is no way it won’t turn those same tools and techniques inward on unrest at home – ensuring it is channeled in the safest and most profitable way possible.

To point out just how absurd America’s “woke revolution” and its opponents are consider Domino’s Pizza and Shake Shack. Both find themselves the targets of opposite ends of America’s current turmoil. Domino’s for at one point in the distant past supporting people who now find themselves among US President Donald Trump’s administration, and Shake Shack for its anemic response to allegations its employees poisoned New York City police officers.

Those promising to boycott one and patronize the other to spite their political opponents never bothered to check who actually owns these two large food and beverage businesses. If they did – they’d see that the exact same handful of investment firms own both.

Investors at Blackrock, Vanguard, or State Street Global Advisors – who own significant shares and profit from both Shake Shack and Domino’s – don’t care which restaurant you boycott so long as you patronize another in their portfolio to spite your superficial political opponents. They are deliberately funding both sides of the turmoil to ensure that this is precisely how America’s “woke revolution” plays out.

Notice no one in the spotlight is saying “Wall Street.” Or saying “boycott them all.” Or pointing out that while poisoning cops or supporting President Trump seems “bad,” it pales vastly in the face of the injustice many of these corporations are guilty of.

It is classic divide and conquer – with Americans at each other’s throats – oblivious to the common threat to their peace and prosperity literally right in front of them, consuming their paychecks every month, funneling it from mainstreet and into gargantuan concentrations of wealth and power on Wall Street.

When rebuilding begins – if it begins – it will be Americans paying through taxes, not Blackrock and others on Wall Street.

How the Rest of the World Escaped American Hegemony

If you watch movies or listen to activists running wild in America’s streets – you’d probably be inclined to believe burning down your own community and endlessly complaining is how to throw off oppression – real or imagined. 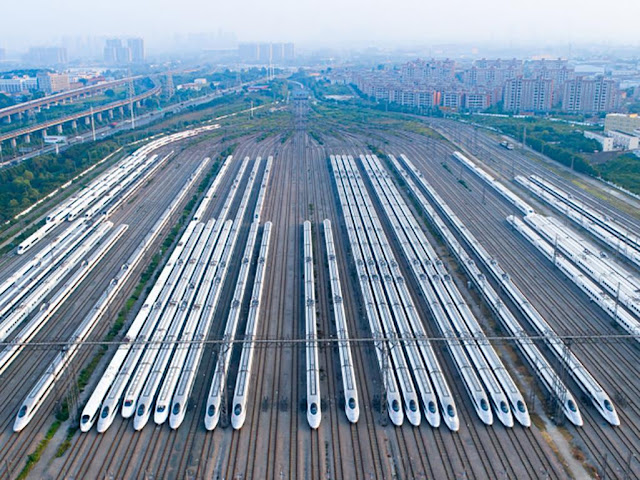 In reality, the rest of the world has begun to move out from under the shadow of America’s global-spanning hegemony. They did it not by burning down their own nations or complaining endlessly to the United Nations – they did it by building superior alternatives to what the US offered the world.

China is a perfect example of a nation that offers industry and infrastructure as an alternative to America’s “investments,” overpriced weapons, and political meddling. China builds dams, railways, factories, and affordable weapons with no political strings attached.

Russia has provided nations around the globe with alternatives for everything from weapons and energy to political and economic alliances.

Individually, nations have begun creating alternatives to once unrivaled American monopolies. Huawei’s rise – first out from under Apple – than far above it – is a perfect example. Russia positioning itself as a key partner for Middle Eastern nations exhausted from America’s “stewardship” of the region is another.

Even in smaller nations the idea of creating alternatives to things like social media platforms monopolized by the US is taking hold – empowering these nations, keeping income local, and displacing America’s unwarranted influence within their borders.

America’s problem is that it has long since abandoned building and making things and instead has focused on coercion, exploitation, thievery, schemes, and moving numbers around on ledgers. This only works as long as no one else starts building and making things and as long as no one attempts to insulate themselves from financial trickery by creating alternative systems for investing in tangible progress.

This process – in fact – of doing just that has dominated the topic of geopolitics for years as America declines and lashes out and as nations patiently and systematically create these very sort of alternatives. Collectively it is called the “multipolar world order” and is one built on physical infrastructure like factories and railways – not spreadsheets and ticker symbols.

At Home: Build the Community You Want to Live in

Wall Street has no problem with “woke” activist burning down businesses across the country – even ones they own. They know whatever investments they have that are found to be “offensive” – they have 10 more that the “woke” community will continue paying into.

What Wall Street doesn’t want is for communities to boycott all of the businesses they own and creating local alternatives that keep wealth inside communities. The concentration of wealth on Wall Street and all the power and influence it buys would thus be spread more evenly across the country.

Fake socialism is offered as a solution – something Wall Street can keep in Washington close by and under their control – rather than any genuine distribution of wealth the people themselves control by actually owning businesses, land, and the means of production by building and operating local factories.

If money is power – asking or even demanding it from those who have it to give it back is not the answer. By no longer giving it to them willingly and instead keeping it in communities is the only way to redirect that money and its power to work for the people rather than Wall Street.

If Americans want a better society to live in – they are going to have to build it – not ask for it from those who have nothing to gain by giving it to them. Those who are burning instead of building, complaining instead of collaborating – are either deliberately attempting to obstruct real reform and progress in the US, or have fallen into traps laid by those who are.

Protesting has its place – particularly when used to protect what is being built. But as far as a medium for change in and of itself – history is devoid of a single example where blind violence and loud complaining alone changed anything of significance.

The “woke revolution” will most certainly not be any sort of exception. With many protesters citing things like the “French Revolution” – this is painfully clear. The French Revolution of course ended with one monarchy overthrown, and another – much larger one headed by Napoleon Bonaparte – taking its place.

To this day France remains controlled by immense corporate-financier interests which exist far above the superficial “democracy” and “protests” of the French people. The French military remains deployed in numerous “former” colonies in Africa where it seeks to reassert itself and the wider West alongside its allies on Wall Street and in Washington.

Clearly something of more substance needs to be done than committing to mindless mayhem in the streets and endless complaining across the media. If people want power, they need to possess the means to acquire it – money. To do so they need to stop handing their paychecks over to Wall Street and keep it in their communities. That is how China and Russia and the rest of the multipolar world has changed things globally and it is the only way things will change for Americans domestically.

Abroad: Now is the time to Judo-Throw America’s Hypocrisy

In Judo, the energy of an attacking enemy is turned against them – generally in the form of a spectacular throw.

For the rest of the world – now is a perfect time to capitalize on the wall-to-wall hypocrisy of a nation that has for decades lectured the world regarding “democracy,” “human rights,” and “free speech” while it now openly crushes all of the above at home.

Fronts funded by the US State Department via the National Endowment for Democracy (NED) operating overseas find themselves in the very unenviable position of taking money from a nation being exposed as chronically ill, systemically racist, divided, and increasingly violent.

How are these NED-funded fronts going to claim they are advancing “democracy” or “human rights” abroad for the US and thanks to generous US funding when democracy and human rights in the US is exposed as dysfunctional at best and nonexistent at worst?

Nations plagued by US meddling could easily make a case to sweep from within its borders fronts funded by a divided, racist, violent, and increasingly hypocritical US – that is – if foreign-funded subversion isn’t already a good enough reason to do so.

With all the energy the US has invested in meddling abroad – that energy has never been more vulnerable and likely to be thrown back against the US.

But nations could just as easily patiently wait.

The US is an empire eating itself.

As long as the rest of the world remains determined to continue building better alternatives to America’s “international order” it will continue to displace American hegemony around the globe. Most nations desire greatly to work with the American people themselves – 99.999% of whom are likewise victims of Wall Street and Washington – whether they realize it or not. This helps explain the almost endless patience of nations like Russia and China in the face of daily provocations by the West.

For Americans, it is up to them regarding what kind of nation they will live in once the dust settles.

One where power and wealth is still very-much concentrated on Wall Street and the violence sown helps justify an even bigger police state than ever before? Or one in which Americans learn that no one in Washington, on TV, or with blue check marks next to their names on Twitter are on their side and start thinking and acting for themselves?

0 thoughts on “America: An Empire Eating Itself”