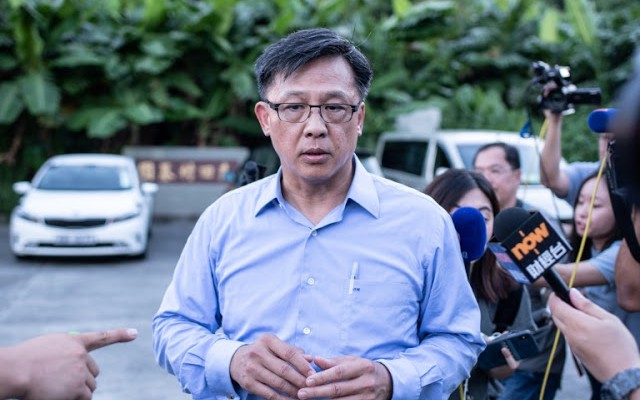 Hong Kong legislator Junius Ho narrowly escaped assassination when an opposition member attempted to drive a knife into his chest after luring him in for a selfie, RT would report.

RT’s article would mention briefly in one paragraph that Junius Ho has been outspoken about ongoing unrest in Hong Kong.

Compare this to AFP’s article, “Pro-Beijing politician stabbed in Hong Kong,” which dedicates more than half its article to detailing Junius Ho’s alleged misdeeds in what can only be interpreted as an attempt to justify the otherwise indefensible act of terrorism.

AFP even divides its article in half with the heading, “- Controversial figure -.”

The article then claims:

Alongside Hong Kong’s leader Carrie Lam and police chief Stephen Lo, Ho has become one of the most loathed establishment figures among democracy protesters.

He has long been one of the most stridently pro-Beijing politicians in the city.

AFP continues – attempting to paint Junius Ho in the least flattering manner possible – indirectly suggesting that perhaps he even deserved it. AFP also attempts to cite growing violence on both sides as if to suggest attempted assassinations are merely the next logical step in ongoing unrest.

Omitted from AFP’s article is that fact that leaders organizing protests are confirmed to be funded, backed, and directed by the US government with many leaders literally travelling to Washington D.C. to openly lobby for and receive aid from the US.

Among them are Joshua Wong, Martin Lee, Benny Tai, and Nathan Law. One – Johnson Yeung Ching-yin – is literally a US National Endowment for Democracy (NED) fellow whose profile can be found on NED’s official website.

Foreign-sponsored sedition – including through the use of terrorism – justifies the targeted nation and its people in defending themselves through whatever means are necessary.

If AFP wanted to make excuses for violence – it could have done so on behalf of China including Hong Kong residents opposed to the ongoing unrest and seeking to restore order and stability to their streets, businesses, homes, and public infrastructure.

No one has the right to use violence to advance their political agenda. But people do have the right to defend themselves against those who try.

US-backed mobs have targeted businesses, infrastructure including trains they’ve tried to repeatedly derail – endangering hundreds of innocent lives – as well as having targeted residents and politicians themselves with violence for opposing the unrest.

Just as Western propagandists – including AFP – have done elsewhere around the globe – they are deliberately defending, spinning, or omitting violence initiated by the opposition – and portraying the response of security forces and local residents attempting to fight back as “aggression.”

AFP to dedicate half its article on the attempted assassination of Junius Ho attempting to explain why he is “one of the most loathed establishment figures among democracy protesters” is nothing short of appalling propaganda and even an oblique sign of approval for the attack.

Exposing and undermining this propaganda at every turn not only prevents this from being effective in regards to Hong Kong – but disarms a dishonest Western corporate media from using this same trick in the many other nations either already under similar attacks – or next in line.

How To Make Sense Of Foreign Protests, Conflicts And Uprisings