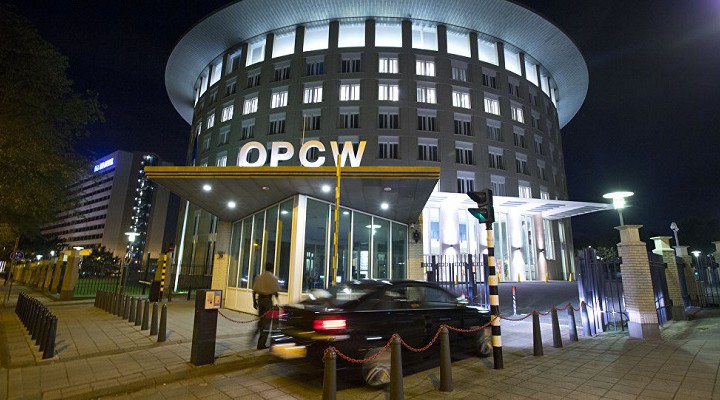 The OPCW (Organisation for the Prohibition of Chemical Weapons) has presented its final report regarding an alleged chemical weapons attack on Douma, Syria on April 7, 2018. Despite attempts by the Western media to hail it as “proof” that the Syrian government used chemical weapons in Douma – the report says nothing of the sort.

Claims of the attack were made by US-backed militants on the eve of their defeat – with the Syrian military retaking Douma the following day. Initial reports claimed sarin or chlorine chemical weapons were deployed through the use of two yellow gas canisters modified as bombs.

No sarin of any kind was found by OPCW inspectors.

While the report suggests two modified yellow gas canisters were used in the attack and that they appeared to have been dropped onto two buildings (locations 2 and 4), the report also mentions that OPCW inspectors found a nearly identical canister in a workshop used by militants to construct weapons.

The alleged “chemical weapons” attack prompted the United States, UK, and France to launch missiles strikes against Syrian military targets on April 14, 2018, long before the first OPCW inspectors even arrived at the sites of the alleged attack on April 21.

No Link Between Chlorine and Casualties

The OPCW report would note video and photographic evidence of alleged victims of chemical exposure could not be linked to any specific chemical including traces of chlorine OPCW inspectors found. The report would specifically claim (emphasis added):

Many of the signs and symptoms reported by the medical personnel, witnesses and casualties (as well as those seen in multiple videos provided by witnesses), their rapid onset, and the large number of those reportedly affected, indicate exposure to an inhalational irritant or toxic substance. However, based on the information reviewed and with the absence of biomedical samples from the dead bodies or any autopsy records, it is not currently possible to precisely link the cause of the signs and symptoms to a specific chemical.

In other instances, the OPCW report would cite witnesses – including medical staff who allegedly treated victims of the supposed attack – who expressed doubts of the presence of any chemicals at all.

The report would state (emphasis added):

A number of the interviewed medical staff who were purportedly present in the emergency department on 7 April emphasised that the presentation of the casualties was not consistent with that expected from a chemical attack. They also reported not having experience in the treatment of casualties of chemical weapons. Some interviewees stated that no odour emanated from the patients, while other witnesses declared that they perceived a smell of smoke on the patients’ clothes.

Other accounts reviewed by the OPCW suggest a large number of casualties were owed to smoke and dust inhalation from conventional bombardment.

Some witnesses stated that many people died in the hospital on 7 April as result of the heavy shelling and/or suffocation due to inhalation of smoke and dust. As many as 50 bodies were lying on the floor of the emergency department awaiting burial. Others stated that there were no fatalities in Douma Hospital on 7 April and that no bodies were brought to the hospital that day.

The conflicting witness reports, the lack of any evidence linking chlorine to even a single death on April 7, and other inconsistencies and contradictions make it impossible to use the report’s conclusions as “proof” that the Syrian government carried out a deadly chemical attack on the eve of its victory in Douma.

While the Western media has focused on the report’s conclusion that chlorine was present and possibly emanated from the two canisters that appear to have been dropped onto two buildings in the area, another crucial finding has been predictably glossed over.

A militant-run weapons workshop investigated by OPCW inspectors revealed a large number of resources for working with chemicals to make explosives. Among an array of chemicals and equipment associated with making explosives, a yellow gas canister was found.

The report would admit:

Although the team confirmed the presence of a yellow cylinder in the warehouse, reported in Note Verbale of the Syrian Arab Republic (Annex 10, point 2) as a chlorine cylinder, due to safety reasons (risk involved in manipulating the valve of the cylinder, see Figure A.8.2) it was not feasible to verify or sample the contents. There were differences in this cylinder compared to those witnessed at Locations 2 and 4. It should be noted that the cylinder was present in its original state and had not been altered.

The lack of interest by the OPCW in the canister despite the obvious implications of its presence in a weapons workshop controlled by militants calls into question the inspectors’ diligence and agenda.

The canister’s “differences” are owed to the fact that those at locations 2 and 4 were modified to appear as bombs, while – admittedly – the canister in the militant workshop remained unaltered.

The obvious implications of a nearly identical canister turning up in a militant workshop making weapons is that the militants may likely have also made the two converted canisters found at locations 2 and 4. OPCW inspectors found other improvised ordnance in the workshop including, “a number of 20-litre metallic drums, some fitted with crude cord-type fuses, which appeared to have been filled with plastic explosives to serve as improvised explosive devices.”

Western media organizations have tried to dismiss the presence of the canister at the workshop by suggesting it was a “setup” orchestrated by the Syrian Arab Army. Huffington Post UK senior editor Chris York would go as far as referring to the workshop as:

…the rebel explosives lab that had been captured by the SAA days before and which they were desperately trying to make look like a chemical weapons lab.

In reality, the OPCW itself would suggest nothing of the sort, and noted that all of the equipment present was consistent with a weapons workshop. Nowhere does the OPCW suggest anything was altered – including the canister – which the OPCW specifically noted “had not been altered.”

The presence of a canister nearly identical to those found at locations 2 and 4 in a militant weapons workshop provides at least as much evidence that militants staged the supposed chemical attack as the Western media claims the canisters at locations 2 and 4 suggest it was the Syrian government.

In the absence of definitive evidence regarding who created and deployed the canisters found at locations 2 and 4, or how they truly ended up there, a better question to ask is “why” they would have ended up there.

Why would the Syrian government – in the middle of a major military offensive it was on the literal eve of concluding in complete victory, drop only 2 canisters filled with a limited amount chemicals to kill – at most – 43 people? A simple artillery barrage could kill just as many people – or very likely – many more.

The use of chemical weapons even on a large scale have historically proven less effective than conventional military weapons – and the use of chlorine on such a small scale as claimed in Douma serves no conceivable purpose at all – at least not for the Syrian military.

Despite claims otherwise, the Syrian government has derived no benefit whatsoever had it been behind any of the chemical attacks it has been accused of by militants and their Western sponsors over the course of the Syrian conflict.

The Douma attack – were it the Syrian military – would have served no tactical, strategic, or political purpose.
Conversely, it would serve as one of the very few actions the Syrian government could take to jeopardize its victory by justifying a large scale Western-led military attack on Syrian forces.

In fact, just one week after the alleged attack, the US, UK, and France would indeed launch as many as 100 missiles into Syria in retaliation, the Guardian would report.

On the other hand, militants who had been occupying Douma had every reason to stage the attack.

By staging the attack on the eve of their defeat and producing graphic scenes of human suffering – particularly among children – the militants would have a propaganda tool readily able to invoke global public concern, sympathy, and outcry in defense of their cause – a propaganda tool their Western sponsors eagerly amplified through their global-spanning media platforms.

With the United States having previously launched entire wars based on false accusations of merely possessing chemical weapons, the militants correctly assumed the US would use the staged attack as a pretext  for further direct military aggression against the Syrian state – possibly saving them.

The US still to this day cites “chemical weapons” and the Douma incident on April 7, 2018 specifically – as part of its pretext to maintain its illegal occupation of Syrian territory and its continued support of militants attempting to overthrow the Syrian government.

The alleged us of “chemical weapons” by the Syrian government also regularly serves as a primary talking point used by the Western media when attacking anti-war politicians, pundits, and commentators.

The OPCW report’s conclusions are too ambiguous to draw a conclusion one way or the other. The presence of a nearly identical canister in a militant workshop raises serious questions and associated implications suggesting the attack was staged – questions that must be adequately investigated and answered.

That the Syrian government gained nothing from the attack and was only further jeopardized politically and strategically by it – raises questions about motivations that likewise need to be answered before drawing conclusions.

But as the Western media has proven many times before – it is fully capable of producing entirely irrational lies based on tenuous evidence or no evidence at all – and even repeating those lies after being blatantly caught telling them previously.

That the Western media is still attempting to sell WMD lies regarding Syria after being caught fabricating them to justify war in neighboring Iraq should be at the forefront of the global public’s mind when considering their “interpretations” of this latest OPCW report regarding Douma, Syria.