HOME / WORLD / Who’d Have Thought 9 Years Ago That Russia & Turkey Would Bring Peace To Libya? 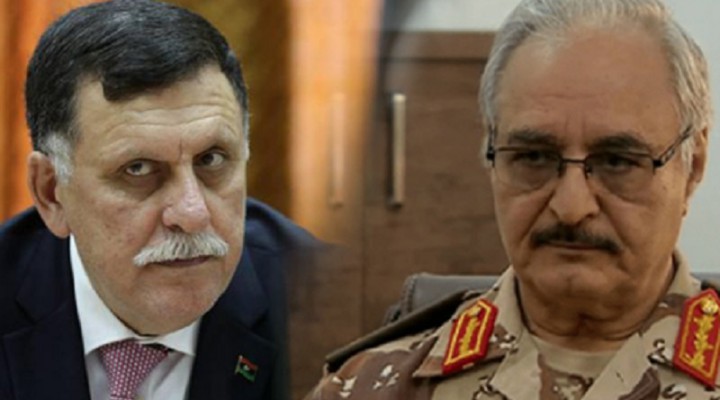 Libya’s two main warring factions are expected to sign a ceasefire agreement in Moscow on Monday in what’s the clearest sign yet that Russia and Turkey’s recent peace efforts in the country are finally beginning to bear fruit, something that nobody could have predicted 9 years ago when the former Jamahiriya was utterly destroyed by NATO and descended into a seemingly never-ending period of intense civil war.

History is in the making as Libya’s two main warring factions are expected to sign a ceasefire agreement in Moscow on Monday following joint Russian-Turkish peace efforts in the country. The leaders of those two aforementioned states met last week and urged the UN-recognized Government of National Accord (GNA) of Prime Minister Fayez Serraj and the eastern-based Libyan National Army (LNA) of General Haftar to find a political solution to their conflict instead of the military one that both sides had hitherto been pursuing following the breakdown of peace talks last year. The author accurately assessed last week that “The Latest Putin-Erdogan Summit Synchronizes Their Regional Strategy“, writing that “the ‘worst-case’ scenario of a ‘proxy war’ between Russia and Turkey in Libya [is] unrealistic since the two countries are much too closely tied together through TurkStream, the S-400s, commerce, and the Syrian peace process for any supposed mercenaries to tear them apart”, adding that the “shrewd geo-energy calculation” of Russia realizing that the GNA’s survival would ensure the continuation of the Turkish-Libyan maritime deal and therefore interfere with the planned construction of the Greece-“Israel“-Cyprus (GRISCY) pipeline (TurkStream’s only realistic rival) “might thus help Russia and Turkey reach an understanding in Libya.”

The Devil’s In The Details

That appears to be exactly what’s happening, and a large part of the credit for restarting the peace process goes to President Putin. It had widely been reported over the past year that Russian mercenaries were operating in Libya in support of General Haftar (despite no evidence ever being presented to confirm this claim), but President Putin clarified over the weekend that even if this is true, “they are not representing the Russian state, nor are they paid by the state.” This was an extremely important statement to make in light of Turkey’s low-level conventional military intervention in the country at the request of its internationally recognized government because many observers speculated that President Erdogan’s fateful decision might mark the beginning of a Russian-Turkish “proxy war” there, the fearmongering scenario of which the author challenged in his previously cited analysis. President Putin’s statement can thus be interpreted as tacitly recognizing the likelihood of Russian mercenaries in Libya but nevertheless reassuring his Turkish counterpart that they aren’t operating as the state’s “proxy”, which therefore greatly reduces the chances that their strategic partnership could be jeopardized by any rash moves that those military contractors might make at their own initiative in pursuit of profit.

The topic of possible Russian mercenary involvement in Libya is a significant one at this point in time because these non-state actors might have played a behind-the-scenes role in getting General Haftar to finally agree to last weekend’s unsigned ceasefire despite previously defying the Russian and Turkish Presidents’ request for such by pledging that “our fight against terrorist organizations that seized Tripoli and received support of some countries will continue until the end” even though his spokesman also said that “we welcome [Russian President Vladimir] Putin’s call for a ceasefire”. It’s pure speculation on the author’s part seeing as how no proof has ever been presented to confirm the presence of Russian mercenaries fighting in the country in support of General Haftar, but if that was really the case, then they might have been “patriotically inspired” by President Putin’s ceasefire call to temporarily put their pursuit of profit aside in the name of peace by refusing to continue serving under the Eastern Libyan leader unless he agreed to Russian and Turkish Presidents’ request from last week. After all, something obviously must have happened in order to dramatically change General Haftar’s mind and get him to eat his own words about “continuing [his campaign] until the end” by ultimately agreeing to the ceasefire proposal, however long it ends up lasting (which remains to be seen of course).

Media reports over the years alleged that the LNA is also being supported by Egypt, Saudi Arabia, and the UAE (which the author refers to as the GCC+ given Cairo’s de-facto membership in the bloc per its practical tutelage to its two main members through the billions of dollars that they’ve provided to it since President Sisi’s ascent to power in 2013), which makes one wonder whether those three are either individually or collectively in support of the ceasefire. It’s unclear at the moment what their positions are, but it’s possible that they’re simply forced to go with the flow if the reported support that Russian mercenaries have reportedly provided to General Haftar is much more consequential than their combined efforts, meaning that their speculative unilateral observance of President Putin’s ceasefire call for patriotic reasons (despite they themselves not representing the state per the Russian leader’s own words over the weekend) might have compelled him to reconsider his pledge to continue his campaign “until the end.” None of this can be known for sure, but this theory does explain why he pulled a volte-face over the weekend because his GCC+ backers have zero interest in giving the Turkish-backed GNA any respite and would have likely pressed him to push on if they had the capability to help him win without the speculative support that he was receiving from Russian mercenaries.

Should this have been what transpired over the weekend (and once again, it can’t be known for sure and is purely speculative at this point), then the question naturally becomes one of why the Russian mercenaries would have stopped fighting on his side. Therein lies the relevance of the theory that they did so for patriotic reasons upon hearing President Putin’s ceasefire call, which was jointly made with his Turkish counterpart in response to that country’s low-level conventional military intervention in the conflict at the request of its internationally recognized government. The whole world saw how the fighting prowess of the Turkish Armed Forces was responsible for the success of their three prior interventions in Syria, so it would also be understandable if these speculative Russian mercenaries realized that fighting against such an opponent is completely different than doing so against a handful of ragtag militias and thus sought to also safeguard their own survival by unilaterally abiding by the ceasefire in order to compel General Haftar to follow suit. In hindsight, this version of events would suggest that Turkey’s low-level conventional military intervention in Libya didn’t immediately worsen the war like many observers predicted, but almost counterintuitively ended up restarting the seemingly lost peace process.

It should be said, however, that this scenario wouldn’t have been possible had the speculative Russian mercenaries fighting in support of General Haftar not become indispensable to his nationwide campaign to the point where their role has become so important that he and his GCC+ allies are unable to continue with their plans “until the end” without those non-state actors’ participation. If it wasn’t for the Turkish low-level conventional military intervention and the subsequent ceasefire proposal jointly made by the Turkish and Russian Presidents last week, then they’d probably have continued fighting under him and quite possibly have helped him capture Tripoli by the end of the month, but that unexpected development completely changed the on-the-ground situation and thus made peace possible for the first time in years. Anything can still happen, and the ceasefire might either not hold or the follow-up peace talks might eventually collapse, but for the time being, it can be confidently said that the coordinated efforts of Russia and Turkey through their inter-regional strategic partnership are most directly responsible for doing more for the cause of bringing peace to Libya than anything that the West and the GCC+ have done over the past 9 years, even if this isn’t part of a long-planned “5D chess move” by either of their leaders but the outcome of “ad hoc pragmatism” between them.

0 thoughts on “Who’d Have Thought 9 Years Ago That Russia & Turkey Would Bring Peace To Libya?”