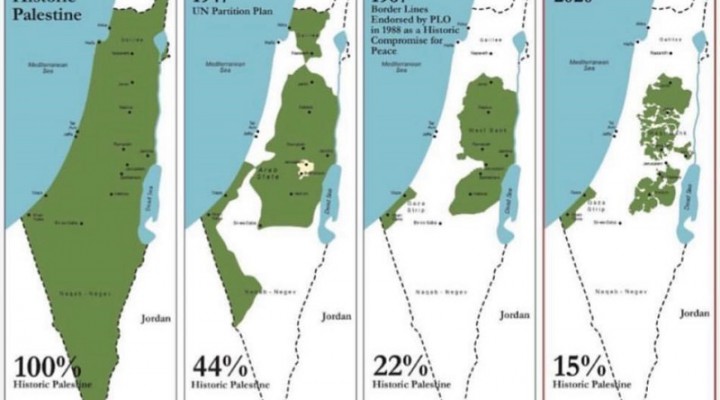 The loud applause that followed the US-brokered Mideast “peace” deals between “Israel” on one hand and the UAE & Bahrain on the other is misplaced since there was never any real state of war between the “opposing” sides to begin with, but presenting these accords as a “breakthrough for peace” is meant to pressure those remaining countries that refuse to recognize the self-professed “Jewish State” by portraying them as “obstacles to peace” so that they too consider abandoning their principled support for Palestine in exchange for positive media coverage and other perks such as economic support.

There’s No “Peace” Without There First Being A War

Many across the world are loudly applauding the US-brokered Mideast “peace” deals between “Israel” on one hand and the UAE & Bahrain on the other, but the entire stunt is a ruse to mislead the global public on several issues of strategic importance. Firstly, the “opposing” sides were never in any real state of war to begin with since they’ve all actually enjoyed very close relations behind the scenes for at least the past decade. This was the biggest “open secret” in the Mideast, but those two Muslim-majority countries aren’t the only ones to have such unofficial relations with the self-professed “Jewish State” since many of their peers share them as well. This is especially so when it comes to Saudi Arabia, Sudan, Oman, Morocco, and Mauritania, for example, all five of which are expected to eventually follow in the UAE and Bahrain’s footsteps sooner or later. None of those seven countries meaningfully oppose “Israel” in any way, and their support of the Palestinians is purely symbolic in order to “save face” among their pro-Palestinian populations.

The Importance Of Recognition And The Lack Thereof

The whole point in grossly exaggerating the two latest accords as a “breakthrough for peace” is to pressure those remaining countries that refuse to recognize “Israel” by portraying them as “obstacles to peace” so that they too consider abandoning their principled support for Palestine in exchange for positive media coverage and other perks such as economic support. It’s significant to point out that Turkey, which has recently presented itself as the latest high-profile patron of the Palestinian cause, still officially recognizes “Israel”, while Iran — largely considered the greatest overall threat to the self-professed “Jewish State” — doesn’t. Syria, which prior to the onset of its ongoing Hybrid War nearly a decade ago was regarded as the most immediate conventional threat to “Israel”, also doesn’t recognize it, nor does neighboring Lebanon which hosts Hezbollah, the socio-political movement/militia whose very name strikes fear into the hearts of every “Israeli” and their supporters across the world. These observations have compelling implications that will now be discussed.

Firstly, refusing to recognize “Israel” doesn’t automatically equate to being pro-Palestinian, as the case of the Gulf Kingdoms confirms. Secondly, it’s possible to still provide some semi-consequential level of support to the Palestinians despite recognizing “Israel”, as the Turkish example attests. Lastly, those countries that historically provided the most important assistance to the shared cause of Palestinian liberation don’t recognize “Israel”. This final observation scares “Israel” and its supporters since it leads them to speculate that some of the remaining states that have yet to recognize it might one day be influenced by their peers to extend military and other significant forms of aid to the Palestinians. As such, it’s in “Israel’s” interests to compel them to recognize it so that the self-professed “Jewish State” no longer has any limits on its levers of influence over each of them.

The Goal Is Propagating Pro-”Israeli” Sentiment Within Society

To explain, the lack of recognition handicaps “Israeli” influence by limiting it solely to the elites of each targeted society. This still endows Tel Aviv with “promising” prospects for reducing the so-called “threats” emanating from each of those countries in the “best-case” scenario, but isn’t as effective as it could be if it was able to freely operate within all levels of society through interpersonal exchanges (educational, cultural, tourism, etc.) and economic deals (trade, investment, etc.). “Israel’s” long-term goal isn’t just to neutralize the pro-Palestinian capabilities of each targeted state’s leadership, but to gradually improve the attitude of its people towards the self-professed “Jewish State” so that they eventually come to support their government’s policy and turn on their compatriots who might still harbor pro-Palestinian sympathies, including as far as volunteering to aid it.

This ambitious goal cannot realistically be achieved without mutual recognition laying the groundwork for “normalizing” the existence of “Israel”. There might always remain presently or potentially influential individuals in those countries’ military, intelligence, and diplomatic bureaucracies (“deep states”) who could abruptly reverse their government’s pro-”Israeli” policies so long as they remain unofficial, but who could more easily be “purged” following formal recognition of the self-professed “Jewish State”. Upon completion of this “deep state” “cleansing”, it’ll be easier to impose pro-”Israeli” sentiment upon society by encouraging people to “turn in” their neighbors who espouse “radical/terrorist” views related to “Israel’s” occupation of Palestine.

Put another way, mutual recognition of “Israel” enables Tel Aviv to more effectively ensure its security interests by catalyzing “deep state” purges in those countries and setting into motion the propagation of pro-”Israeli” sentiment within society from the top-down. Altogether, this one-two punch is thought to greatly reduce Iran’s soft power capabilities for “flipping” “on-the-fence” states that don’t recognize “Israel” from providing mostly symbolic support for Palestine to much more meaningful assistance instead, especially in the military dimension. The latest misleadingly described “peace” deals are part of this larger strategy since they’re being exploited to pressure those remaining states that have yet to recognize “Israel” into reconsidering their stance.

Recognizing “Israel” is the most surefire way for the self-professed “Jewish State” to mitigate the military threats (both present and potential) to its occupation of Palestine, hence the recent US-brokered diplomatic blitz in this direction. Other majority-Muslim countries will likely follow the UAE and Bahrain’s lead, though those that do were never truly the supporters of Palestine that they portrayed themselves as otherwise they’d never recognize “Israel” prior to the fair resolution of this dispute like they previously promised. Instead of being undertaken from a position of strength, however, these recent recognitions really reveal just how insecure “Israel” feels about Iran’s influence in swaying those states that haven’t recognized it into more meaningfully supporting the Palestinians, including through military means.