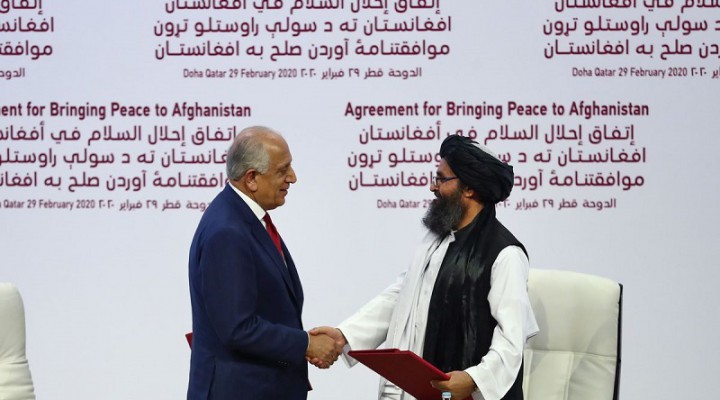 The US and the Taliban signed an historic peace deal on Saturday in the Qatari capital of Doha which sets the timeline and conditions for the full withdrawal of foreign forces from Afghanistan, with this landmark agreement giving credible reasons for observers to be cautiously optimistic about its prospects of success but also containing within it several key loopholes that deserve to be analyzed more in depth so as to obtain a more comprehensive understanding of the possible pitfalls that could capsize this pivotal accord.

The US-Taliban peace deal that was signed on Saturday in the Qatari capital of Doha is an historic agreement which sets the timeline and conditions for the full withdrawal of foreign forces from Afghanistan. The State Department published the entire text of this four-page document on its website, and it should certainly be reviewed by observers who want to read it in totality from a primary source instead of risk being misled by some of the more opinionated “reporting” about it in both the Mainstream and Alternative Media. In a nutshell, the US committed to scaling down its military presence in the country over the next couple of months prior to the complete withdrawal of it and its allied coalition’s forces within 14 months in exchange for the Taliban ensuring that their homeland’s soil is never used to host any individual or group who harbors the intention to harm America or its allies. The deal also includes some vague details about the need to initiate an intra-Afghan peace process in parallel with the ongoing international one, which will in turn be rewarded by the US beginning to lift its sanctions on the Taliban and lobbying the rest of the world to follow suit as well.

The very fact that the Trump Administration reached such a pragmatic agreement with the Taliban to end America’s longest-running war despite his pledge on the 2016 campaign trail to be merciless towards groups that he regards as “radical Islamic terrorists” speaks to just how serious he is about keeping his promise to “end endless wars” such as the one in Afghanistan in order to focus more on his “America First” vision. It took a lot of political will for him to go through with this decision and acknowledge that his plan to “Make America Great Again” doesn’t mean that America will always win all wars. For a variety of reasons, Trump inherited a losing war that he was unable to turn around, so the best possible option was to end it in as “controlled” and “face-saving” of a manner as possible, which is exactly what the deal aims to achieve. Considering the ongoing election season, it was also a shrewd political move to improve his appeal among voters by finally doing what most Americans have wanted for a while now, which is extricate their military from the land-locked country and let others do the dirty work instead if they’re so inclined.

It’s for these reasons of realistic military-strategic necessity and self-interested political calculations that observers are justified in being cautiously optimistic about the the deal’s prospects for success despite the difficulty in initiating the next pivotal step of the (possibly Moscow-hosted) intra-Afghan peace process, especially since Afghan President Ghani refused to recognize the agreement’s provision mandating the release of Taliban prisoners first. Trump and the Taliban have evidently established enough trust with one another for the President to publicly declare that he intends to meet with its leaders sometime soon, so the aforementioned challenge will probably be surmounted after Washington puts considerable pressure on Kabul in the coming future. Before going any further, it deserves to be mentioned that last weekend’s historic peace deal couldn’t have been possible without the crucial behind-the-scenes support of the global pivot state of Pakistan, which played an irreplaceable role in this process that stands in stark contrast to India’s self-interested opposition to peace. If everything goes according to plan, then “The Taliban Peace Deal Will Redefine The Regional Balance Of Power” and subsequently facilitate Pompeo’s strategy for strengthening American influence in Central Asia through economic means instead of military ones like it’s thus far failed to do.

These envisaged outcomes are ambitious, but far from certain because of a few loopholes contained in the Afghan peace deal which might prove to be troublesome further down the line. The first concerns the possible failure of the intra-Afghan peace process, which could indefinitely delay the US’ promise to begin lifting international sanctions on the Taliban, thereby making the group understandably restless and prone to reverting back to its militant ways out of desperation to advance its interests at all costs. That would deal a disappointing death to this promising peace plan, but can still be avoided and therefore shouldn’t be too worrisome of a scenario for the moment at least. What’s more concerning, however, is the undefined nature of three key provisions within the agreement, namely the relationship between “private security contractors” and “the United States, its allies, and Coalition partners”; the nature of the “threat to the security” of “the United States and its allies” that the Taliban is committed to thwarting from individuals and groups alike; and exactly what constitutes an American “ally” in the first place.

The Problem Of “Private Security Contractors”

In sequential order, Part One of the accord stipulates that “The United States is committed to withdraw from Afghanistan all military forces of the United States, its allies, and Coalition partners, including all non-diplomatic civilian personnel, private security contractors, trainers, advisors, and supporting services personnel within fourteen (14) months following announcement of this agreement”. On the surface, this sounds like all American, allied, and coalition personnel serving as “private security contractors” must withdraw, but it’s not clear whether this also includes third-country nationals working for such firms headquartered in those three categories of states (the US, its allies, and the coalition) or if these “first-country nationals” can continue working in Afghanistan provided that they’re employed by a firm that isn’t based in any of those aforementioned categories. This issue will have to be clarified in the future in order for no “unexpected disagreements” to arise which could either be provoked by the anti-Trump “deep state” and its Indian allies or exacerbated by them in order to scupper the peace plan.

The second and third loopholes concern the nature of the “threat to the security” of “the United States and its allies” that the Taliban is committed to thwarting as its part of the deal. The words “threat” and “security” are extremely vague and therefore subject to broad interpretation, and it’s also confusing that the word “ally” isn’t defined either since this could either mean the US’ NATO partners with whom it’s formally allied or could potentially be expanded to include its “Major Non-NATO Allies” like Pakistan, which is threatened by Indian-backed terrorist groups in Afghanistan such as the “Baloch Liberation Army” and the TTP (popularly described as the “Pakistani Taliban” by the Western Mainstream Media). Although the argument can be made that the US won’t refuse to implement its responsibilities under the Afghan peace deal just for the sake of ensuring Pakistan’s security in the event that the Taliban fails to make effective progress in defeating these two State Department-designed terrorist groups which pose no credible threat to America’s domestic security, it should be remembered that the US’ grand strategic goal of relying on economic means to expand its post-war regional influence would be jeopardized if the destabilization of Pakistan endangers the viability of N-CPEC as a future international trade corridor to Central Asia.

Considering all of the above, the expectation is nevertheless that the US and the Taliban will sort out the “legal” loopholes in their peace agreement and therefore pave the way for a new future for Afghanistan. Washington has considerable leverage over Kabul and can compel it to its bidding under ever-intensifying amounts of pressure, and while some in the American “deep state” share the concerns of their Indian counterparts about the consequences of Trump’s deal, they probably won’t succeed in scuppering the accord given the hard-earned trust that’s been established between the President and the group’s leaders over the past year of negotiations. Upon sorting out the uncertainty surrounding the future of all “private security contractors” in the country and clarifying the extent to which the Taliban must ensure Pakistan’s security from Indian-backed but Afghan-based terrorist groups, the long-awaited peace will become a much more realistic prospect than ever before, thus heralding a new era of regional geopolitics that will undoubtedly shape the course of the ongoing New Cold War.