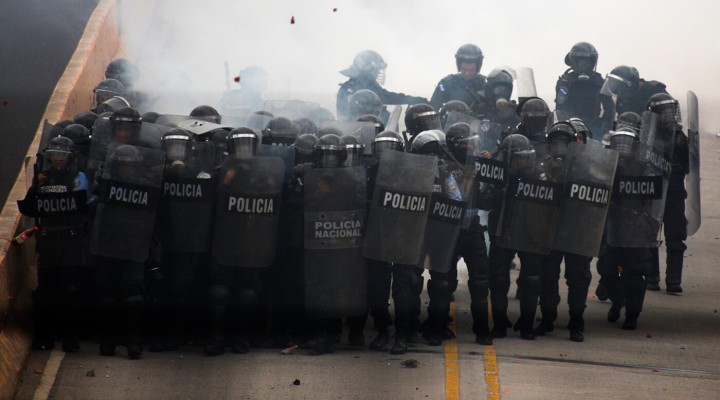 Police have been relying on heavy-handed tactics to repress protests for over a month, including the use of live rounds and tear gas. In the past week, the situation has only worsened.

MPN- Repression against resistance activists in Honduras has become increasingly lethal as the country braces for planned protests ahead of the 10-year anniversary of a U.S.-backed coup. Police and military forces have used live rounds against students, resulting in at least three deaths, as protests heat up ahead of the anniversary on Friday.

For months, Hondurans have taken to the streets to oppose government measures targeting public healthcare and education as part of a wider deal with the International Monetary Fund. The movement, instigated by teachers’ and healthcare workers’ unions, struck a nerve and was quickly joined by other groups. Initially, the primary aim of the protest was for the government to cancel the IMF deal, but as repression increased, so too did calls for the resignation of President Juan Orlando Hernández.

This is a picture from the funeral today for 17-year-old Elbin, the student activists shot dead by police in Honduras. A young man carrying his casket wears a shirt that says “Fuera JOH” – the acronym for the president Juan Orlando Hernandez. It tells him to leave office 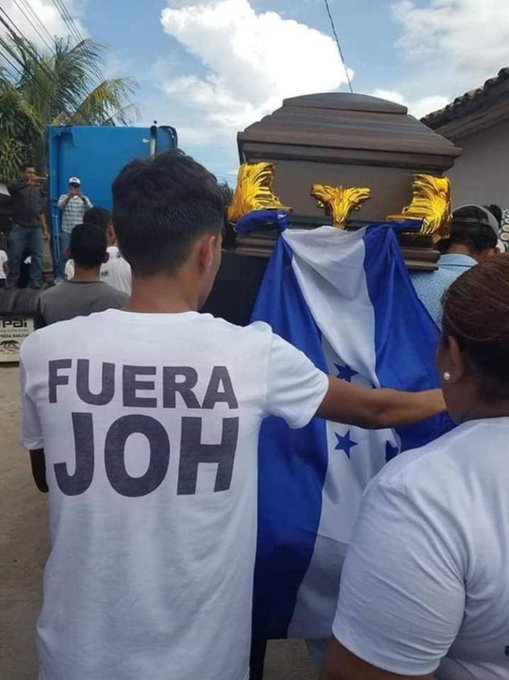 Hernández’s policies as president have thrown fuel on the fire initiated by the first post-coup governments. Neoliberal economic reforms have devastated the public sector with mass-layoffs and budget cuts and caused poverty rates to skyrocket, while violence against women and sexual minorities has also increased. Hernández has only exacerbated these problems and dealt with frustration over them with increased militarization.

Hernández — commonly known by his acronym JOH — ran for reelection in 2017 in violation of the Honduran constitution, which forbids anyone who has served as president to hold the post again. Meanwhile, the election itself was marred by massive fraud on multiple levels. The United States recognized his then-contested presidency despite the recent revelation that Hernández and some of his closest advisors have been under investigation by the Drug Enforcement Administration for participating “in large-scale drug trafficking and money laundering activities relating to the importation of cocaine into the United States” since 2013. President Hernández’s brother is currently in prison in the United States for charges also related to drug trafficking.

Today, the capital city of Tegucigalpa is filled with anti-Hernández graffiti, and the streets are periodically flooded with protesters calling for him to leave office. On the ground, activists tell MintPress News that things may be coming to a head.

In a testament to the government’s unease, I was detained at the airport upon landing in Tegucigalpa on Wednesday to cover this story.

I was just let out of detainment at the airport in the capital of Honduras. They didn’t explain why the detained me, just asked a bunch of questions.

Stay tuned to @MintPressNews as we approach the 10yr anniversary of the US-backed coup in this country. Much more to come 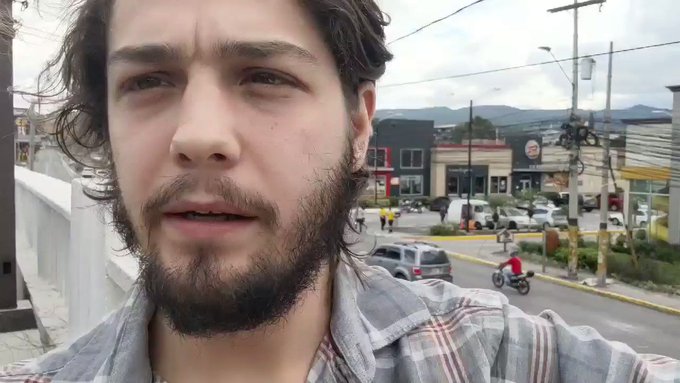 503 people are talking about this

Travelers seeking to attend a conference of resistance leaders have had difficulty entering the country, and I would appear to be among them — as is Adrienne Pine, professor of anthropology at American University, and a handful of Telesur journalists.

The conference is being held by the Liberty and Refoundation Party (LIBRE), the political party led by the ousted former president, Manuel Zelaya. On Wednesday, one LIBRE official bemoaned to MintPress that there has not been a single hospital or high school built in the country since the coup.

LIBRE members of congress have been using firecrackers and horns to disrupt the body. Currently, all legislation is at an impasse. The body has responded by refusing to pay LIBRE congress members’ salaries.

Police have been relying on heavy-handed tactics to repress protests for over a month, including the use of live rounds and tear gas. In the past week, the situation has only worsened.

In response to the unrest, President Hernández’s political party paid protesters to come to the capital to “march for peace” in the country. Articles and videos posted to social media show the cash being distributed to protesters.

At the peace march, one student was violently beaten by a pro-Hernández crowd. Hernández also ordered 25,000 troops into the streets to quell what many say is now an uprising. 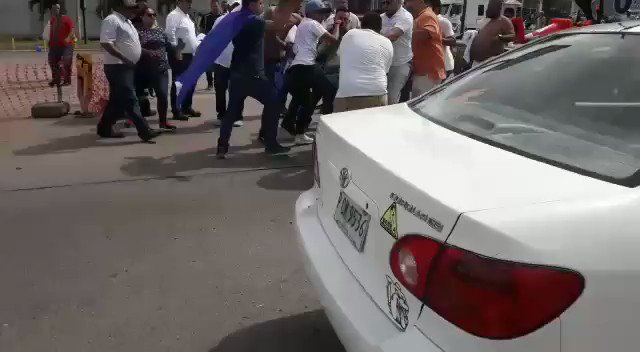 78 people are talking about this

In the course of three days, three people were shot dead by police, including one Eblin Noel Corea Maradiaga, who would have turned 18 years old on July 10.

Police have also cracked down on students from the Honduran Technical Institute and raided the National Autonomous University of Honduras, claiming students had kidnapped a police officer and were in possession of “bazookas.” Police provided no evidence to back their claims and neither weapons or the kidnapped officer were recovered in the raid, which was illegal under Honduran law. Four students were shot during the raid; however, they appear to be recovering.

The United Nations High Commissioner for Human Rights in Honduras said it had “deep dismay over the consequences of the operation of the military forces.”

Meanwhile, a young man with protective status as a human-rights defender was brutally beaten by police and was left with a severely broken arm, according to x-rays.

Resistance leaders from the education and healthcare sectors put out a joint statement condemning the attack on the Autonomous University and announcing plans for further actions on Thursday and Friday.

This morning in Honduras: a right-wing newspaper laments the loss of 10 million lempiras ($400,000) in property destruction in the 51 days of protest against president Juan Orlando Hernandez 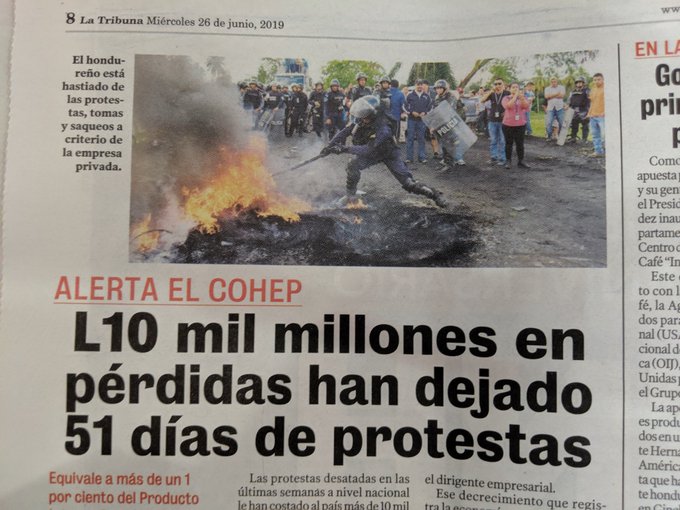 35 people are talking about this

Gerardo Torres, Secretary for International Affairs of the LIBRE Party, tells MintPress News that they are undeterred by the repression:

We see once again an increase of the violence from the Honduran state. We have seen this before. They increase the use of guns, repression, torture, death squads. Normally they point their guns at the youngest people in the protest and they go to the most poor neighborhoods, and they kill people to try to deter the participation, but we’re beyond being deterred.

They only have two options: first, it’s not the most likely, but they understand we won’t stop and try to find a negotiation or buy people with extortion. The other way is they increase the repression even more.

MintPress News will continue its coverage of the coup anniversary in Honduras in the coming weeks with articles, protest footage and interviews with resistance leaders and analysts on the ground.