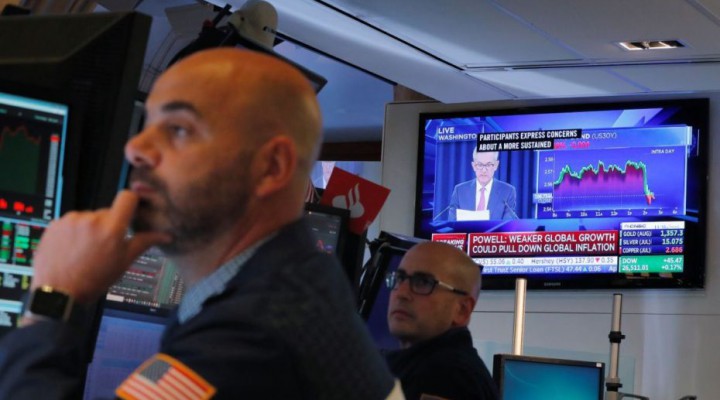 The great de-coupling is here. The U.S. now has plan a to purge Chinese tech companies fully from America’s internet, creating what the Trump administration has dubbed the Clean Network. It mirrors the White House’s existing 5G Clean Path initiative to remove all Chinese components from systems ‘everywhere’, and which now extends it to everything tech on the ‘net.

China fears a financial ‘Iron Curtain’ is about to fall – a complete expulsion from the dollar sphere. In fact, soft capital control is already birthing, with Bloomberg reporting that the U.S. is now asking colleges and universities to divest from Chinese holdings in their endowments, “warning schools in a letter this last week, to get ahead of potentially more onerous measures [coming] on those holding the shares”.

Reportedly, the Chinese leadership annual August Beidaihe retreat, agreed (should the recommendations be subsequently endorsed at the Central Committee plenum in October) that China should prepare for war; build food and energy reserves; establish the Eurasian continental economic system, recover its overseas gold and broaden the global RMB settlement system (including its digital Yuan) – and prepare for the complete interruption of relations with the U.S.

Yet, whilst the media focus is all on this ‘tech’ and ‘sphere’ de-coupling, something profound – and quite separate – is already shaping the global monetary order (quite apart from likely Chinese exclusion). It is set, in the longer term, to be more revolutionary – and contentious – than even ‘de-coupling’. It is getting sparse attention.

However, as it becomes ever more evident that no ‘V’ shaped economic rebound will be arriving soon – as the U.S. ‘house’ catches fire again with Coronavirus over the autumn and winter, presaging a further economic closedown – the chances are that this bombshell will indeed ignite. First, a little background:

Earlier this month, Zero Hedge published a remarkable interview with two former Fed economists – Simon Potter (who was also the former head of the Fed’s Plunge Protection Team for many years) and Julia Coronado – both of whom have tremendous impact on thinking at the Fed.

They hinted at the Fed’s ‘last ditch’ stimulus and bailout strategy (i.e. should the U.S. economy be further stalled by Coronavirus): It is ‘to wire’ digital money directly into Americans’ smartphone financial apps, bypassing the banking system entirely. “The two propose creating a monetary tool that they call ‘recession insurance bonds’, which draw on some of the advances in digital payments and ‘wired’ instantly to Americans”:

“As Coronado explains the details, Congress would grant the Federal Reserve an additional tool for providing support — say, a percent of GDP [in a lump sum that would be divided equally and distributed] to households in a recession. Recession insurance bonds would be zero-coupon securities, a contingent asset of households that would basically lie in wait. The trigger could be reaching the zero lower bound on interest rates or, as economist Claudia Sahm has proposed, a 0.5 percentage point increase in the unemployment rate. The Fed would then activate the securities and deposit the funds digitally in households’ apps.

“As Potter then elucidates: “it took Congress too long to get money to people, and it’s too clunky. We need a separate infrastructure. The Fed could buy the bonds quickly without going to the private market. On March 15 they could have said interest rates are now at zero, we’re activating X amount of the bonds, and we’ll be tracking the unemployment rate—if it increases above this level, we’ll buy more. The bonds will be on the asset side of the Fed’s balance sheet; the digital dollars in people’s accounts will be on the liability side.””

Then, just days later, Federal Reserve Governor, Lael Brainard, hinted once again at the coming monetary revolution: “To enhance understanding of digital currencies, the Federal Reserve Bank of Boston is collaborating with researchers at MIT, in a multi-year effort to build and test a hypothetical digital currency oriented to central bank uses … It is important to understand how the existing provisions of the Federal Reserve Act with regard to currency issuance apply to a CBDC and whether a CBDC would have legal tender status, depending on the design”.

So what would prompt the Fed to pursue “this significant policy process”? Why – another leg down, resulting from an upsurge in Covid-19, of course. The last bailout was not just “clunky”, it sent stocks and bonds soaring skyward. And has severed asset prices from any connection to metrics of value, from fundamentals, and from analysis (and did do not much either for ordinary Americans). What we now have, therefore, is a market focussed only on narratives, and not on reality. This has implications, too.

The prospect of the Fed ‘printing’ digital dollars, wired to peoples’ cash-pay apps, as a new stimulus mechanism – replete with the overtones of a ‘Davos Reset’ formula for moving toward a digital, global Universal Basic Income model is obvious – as is the political temptation for politicos to pay for all sorts of political ‘projects’ in this way.

Yet this is only a half of the ‘Revolution’ – two other components are already ‘done’. Two tipping-points have been passed. Firstly, people can see (with Boomer entitlement spending about to soar into the Trillions), that the U.S. government cannot support the debt burden without having the central bank simply ‘print’ more money. Many on Wall Street will see this as the solution: Putting digital money directly onto apps must be inflationary, they believe. And inflation can melt away America’s debt-load through de-basing the currency.

Secondly, in April, the Fed already changed the Supplementary Leverage Ratios (SLR) to exempt U.S. Treasuries from capital-ratio requirements. In simple English, this means that commercial banks can buy any amount of U.S. government debt instruments, without putting aside capital on their balance sheet, to support such purchases. So that (as long as rates are even marginally positive) they can buy and enjoy a nominal income. In June, U.S. banks increased their U.S. Treasuries by 48%. Effectively, the Fed facilitates the credit creation; the banks use it to buy Treasuries; and the government then spends the money.

Magic. Like the Mad Hatter’s tea-party – out of thin air, things appear. Not once, but twice: as a similar trick was done by the Fed via multiplying the value of Treasury bails out – by providing credit on a 10:1 basis to the Treasury’s special purpose vehicle. (The Fed says this is not direct spending, which would be illegal).

So, let’s try putting all this into some sort of order:

Firstly, America has already started down the path towards a nationalised (centrally-managed) economy – rather like China’s. The Treasury and Blackrock Hedge Fund, (who manage the Congressional bails out distribution on behalf of the Treasury), now make the (economic) life-or-death decisions for U.S. businesses – from the very big, down to the very small.

This is a ‘great reset’. And like most temporary measures, it is likely here to stay. What’s not to like from the U.S. President’s point of view? He controls ‘money’ issuance now that the Treasury and Fed effectively are fused together, and can ‘steer’ the U.S. economy in a ‘national-interest’ direction during its tech war with China (and Europe). Free markets? They do not exist in America at this point.

Secondly, this financial war is already underway, and China will likely use its CIPS (financial clearing system) and its Central Bank initiated digital yuan (already in use) to circumvent SWIFT and the USD. Except this will mean others being paid in a non-fungible digital currency that can only be recirculated back to China for its goods. Or, maybe not? Like China’s Shanghai oil futures market, foreign sellers may be given the option to hold their sale proceeds either in Chinese debt instruments, or, to exit their Yuan via the physical gold market.

But, apart from U.S. and China, Russia, Italy, Iran and UK are, amongst others, planning their own CBDCs. Are we moving then – in an era of enhanced financial war – towards multiple, non or quasi, fungible digitalised of means of payment, as the new normal?

Third, the world again is demanding gold in exchange for U.S. dollars. And the Fed’s primary dealers – some of which operate as bullion banks — seem unable to comply. But with the advent of the Coronavirus, the U.S. financial system has been forced to lower real interest rates down into negative territory, causing gold to look more attractive than holding devaluing U.S. Treasuries.

Traditionally, the Fed controls the gold market to prevent gold from effectively competing with, or displacing, the U.S. dollar as the primordial monetary instrument. But someone, or some entity somewhere, is now battling the U.S. central bank for that control. In short, the Fed’s manipulation process presently is failing. And unless the Fed can suppress the price of gold, and regain control, we may see an escalating, downward spiral in the value of the dollar vis à vis gold.

Here – finally – we come to the crux. In outlining the monetary ‘revolution’ taking place in the U.S., there is much in it for the Wall Street ‘Davos’ contingent to like: the move from traditional money into digital; Central Banks issuing digital money (though the ‘Davos’ crowd would prefer that to be done by a global authority); the end of cash; and the system-control and transparency that digitisation would allow. Some of this – such as the political instrumentalisation of smartphone apps – have been given a push by the Coronavirus.

But the U.S. Establishment is deeply split: Yes, there is a powerful, Wall Street, globalist component who support Davos, but others in the Deep State, including some amongst the neo-cons, would rather die-in-a-ditch than see U.S. dollar hegemony lost – amidst the undoubted exigencies of the present economic recession. These tend to be Trump supporters.

So let us put the final pieces into place: U.S. asset markets are presently unhinged from all fundamentals, and ruled by a ‘don’t fight the narrative’, and existential fear of potentially ‘missing out’. In other words, the un-anchored stock market highs – on which Trump’s re-election hopes are pinned – are highly vulnerable. Sentiment can shift in the flash of an eyelid from an adrenalin-fuelled ‘fight’ mode, to ‘flight’. All that is needed is a changed narrative.

And what narrative might that be? Well, the ‘Sage’ of Omaha, Warren Buffet, this week dropped a very unexpected narrative: Not known as a ‘gold bug’, he was shown to have dumped stocks and bought gold, and gold-miners. So, who next for sparking the October market sell off, as the dollar continues to spiral downwards, and interest rates edge upwards?

Mr Soros may be smiling?

0 thoughts on “The Quiet American Reset”