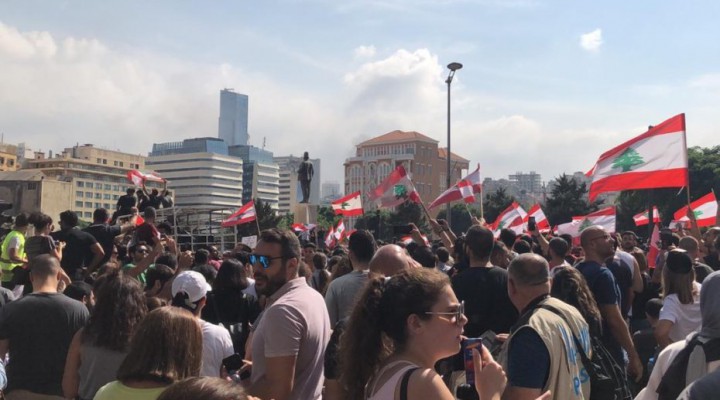 Lebanon is ‘special’ in its own distinct way – but yes, it precisely is giving warning of a turbulence quietly incubating across the Middle East.

There have been protests (mostly pointing up economic stress) across the region for some months: from Egypt to Iraq. But the Lebanese demonstrations have caught the global attention. And there is no doubting that the Lebanese protests represent a major phenomenon. We may ask whether they are essentially a local manifestation, reflecting only the well-attested Lebanese problems of corruption, widening disparities in wealth, nepotism and failing state structures, or do they signal something much deeper? Lebanon, historically, has been viewed as ‘the bell weather’ – pointing up the general health of this region.

Well, if Lebanon is indeed such, we might conclude that the patient is presenting rather feverish symptoms. But that should not be so surprising. For, the region is already experiencing strategic ‘shock’ – and this condition is likely to be much aggravated by the additional psychological stresses of fast-approaching economic crisis. Of course, Lebanon is ‘special’ in its own distinct way – but ‘yes’, Lebanon precisely is giving warning of a turbulence quietly incubating across the Middle East.

The ‘strategic shock’ is represented by the collapse of long-established landmarks: the US is departing Afghanistan, and the Middle East. The Wolfowitz doctrine of US primacy across the region is drawing to a close. Yes, there will be push-back in parts of the ‘liberal’ western Establishment – and there will be periods of two US steps ‘out’ from the region, and with another ‘in’.

But the psychic reality of this incontrovertible ‘fact’ has seared itself into the regional psyche. Those who dined liberally from the cornucopia of power and wealth under the ‘old order’ are understandably frightened – their protective cover is being snatched away.

This shift has been signalled in so many ways: the US non-reaction to the Iranian downing of its drone; the US’ non-reaction to the 14 September Aramco strikes; the red-carpet laid down for President Putin in Riyadh – that the direction of US policy ‘travel’ is plain. Yet, nothing signals it more evidently than Secretary Pompeo’s recent message to Israel, during his last visit: i.e. you, O Israel, should feel free to respond to any threats to your security, from whatever source, and arising from wherever. (Translation: You (Israel) are on your own), but please don’t escalate tensions. (Translation: don’t place our American forces as ‘pig-in-the-middle’ of your disputes, as we want the withdrawal to proceed smoothly). Of course, Trump doesn’t want Congress snapping at his trouser legs, as he unfolds this controversial act.

If this be the message handed out to Israel, then of course, it applies – in spades – to the Lebanese élites who have dined so well under the previous regime – whilst their Lebanese compatriots succumbed to ever greater impoverishment. The Russian diplomatic and security achievement for Syria, as evidenced in the communiqué issued this week after the Sochi summit with Erdogan, upends the old landmarks across the northern tier of the Middle East. In Syria evidently, but Lebanon and Iraq too. The new reality demands new dispositions.

This might be ‘bad news’ for some, but the very moment of facing reality – of making hard choices (i.e. that the US can no longer afford, and the world will no longer finance, its global military presence) – may also have ‘its silver lining’. That is to say, the end to US occupation of part of Syria may concomitantly well unlock a political settlement in Syria – and upturn fossilised and corrupt establishments in neighbouring states too.

This – the uprooting of old, embedded landmarks – which leaves America and Saudi Arabia as waning stars in the regional political cosmos – is but one backdrop to events in Lebanon. An old order is seen to be fading. Might even the Ta’if constitutional settlement in Lebanon, which Saudi Arabia used to lock tight, and petrify, a Sunni-led sectarian establishment be now in play?

Again too, across the Arab world, there is a legitimacy-deficit staining existing élites. But it applies not just to the Middle East. As protesters peer around the world, through their smart phones, how can they fail to observe the low-intensity ‘civil war’ – the polarised protests – in the US, the UK and parts of Europe, waged precisely against certain élites. What price then, western ‘values’ – if westerners themselves are at war over them?

Of course, this dis-esteem for global élites is connected to that other powerful dynamic affecting the Middle East: the latter may not be in a ‘good place’ politically, but it is in an even worse place economically. In Lebanon, one-third of Lebanese are living below the poverty line, while the top one percent hold one-quarter of the nation’s wealth, according to the United Nations. This is not the exception for the region – It is the norm.

And intimations of global slow-down and recession are touching the region. We all know the figures: half of the population in under 25. What is their future? Where is there some ‘light’ to this tunnel?

The western world is in the very late stage to a trade and credit cycle (as the economists describe it). A down-turning is coming. But there are indications too, that we may be approaching the end of a meta-cycle, too.

The post-WW2 period saw the US leverage the war-consequences to give it its dollar hegemony, as the world’s unique trading currency. But also, circumstances were to give US banks the exceptional ability to issue fiat credit across the globe at no cost (the US simply could ‘print’ its fiat credit). But ultimately that came at a price: the limitation – to being the global rentier – became evident through the consequence of the incremental impoverishment of the American Middle Classes – as well-paid jobs evaporated, even as America’s financialised banking balance sheet ballooned.

Today, we seem to be entering a new cycle period, with different trade characteristics. We are in a post-general manufacturing era. Those jobs are gone to Asia, and are not ‘coming home’. The ‘new’ trade war is no longer about building a bigger bankers’ balance sheet; but about commanding the top-end of tech innovation and manufacturing – which is to say, gaining command of its ‘high peaks’ that, in turn, offer the ability to dominate, and impose the industry standards for the next decades. This – tech standards – is, as it were, the new ‘currency’, the new ‘dollar’ of the coming era. It is, of course, all about states maintaining political power.

So, what has this to do with the Middle East? Well, quite a lot. The new, global tech competition implies a big problem (as one Washington commentator noted to me). It is this: what to with the 20% of Americans that would become ‘un-needed’ in this new top-end tech era – especially when lower paid jobs are being progressively robotised.

Here is the point: This tech ‘war’ will be between the US, China and (to a lesser extent) Russia. Europe will be a bit-player, hard pressed to compete. If the US thinks it will end with 20% of population surplus to requirement, for Europe it likely will be higher; and for the Middle East? It does not bear thinking about.

The Middle East is still a fossil fuel fed economy (at time when fossil fuel is fast falling out of fashion, capital expenditure is paused, and growth forecasts for demand, are being cut). Even Lebanon’s economy – which has no oil – is (paradoxically) still an oil economy. The Lebanese either work in the Gulf, servicing the ancillary services to a fossil-fuel based economy and remit their savings to Lebanese banks, or work in the Lebanese financial sector, managing savings derived largely from this sector.

The point is, how will the region find a future for a young population that is out-running the continent’s water and (useful) land resources, if fossil fuel cannot be the employment driver?

It won’t? Then expect a lot more protests.

Rania Khalek: The US Empire Is Using the Legal System against Max Blumenthal