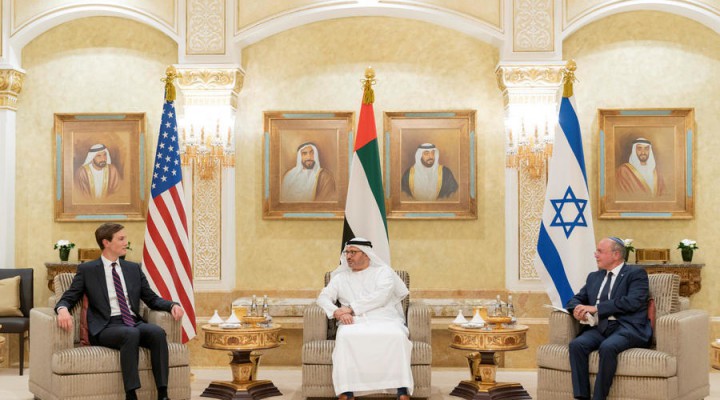 So it never was then a ‘peace agreement’ between Israel and the UAE. It was ‘normalisation’ for the purposes of mounting a military alliance against Iran. Pompeo suggested so, this weekend. He said that the UAE and Israel have agreed to form a security and military alliance against Iran to ‘protect’ U.S. interests and the Middle East. This agreement and any that might follow means that there will be an Israeli military and security military presence in the Gulf, and a joint Israeli-UAE intelligence base on Socotra Island in the Red Sea basin overlooking the Bab al-Mandab Strait. According to Pompeo, this agreement will transform the conflict in the Middle East from being Arab-Israeli, to Arab-Iranian, and perhaps Arab-Turkish later on.

The language used by Pompeo is significant in another way. Trump is proud of having taken Jerusalem ‘off the table’ (in the context of negotiations with the Palestinians). He says he has taken the Golan and the Jordan valley ‘off the table, too’. Pompeo’s formulation of the conflict transformation he believes he has just engineered says something else too: It is that the Palestinian issue is ‘off the table’ as well. It is now all about Iran (in Trump’s optic). The Palestinians are to stew in their own juices.

Well, Pompeo perhaps was speaking loosely when he designates it now an Arab-Iranian conflict. It is (at least for now), the UAE alone that has put itself on the Front Line. The Qatari-owned Al Quds al-Arabi scathingly noted that “in this alleged alliance against Iran … were the unwanted were to happen, and [a larger] war break out against Iran, the Emirates will be on the receiving end of the blows – and will be the biggest loser.”

The UAE FM has already been scurrying to tell Tehran that the anti-Iranian rhetoric of the new military alliance is really not targeted at Iran at all, but to little avail (Pompeo let the cat out of the bag). The Emirates have, of their own volition, elected to ‘sleep with the enemy’, as many will likely conclude, and must bear the consequences. The Iranian Supreme Leader said as much.

Will this new military alliance (many may recall the much touted, but wholly defunct, Sunni ‘Arab NATO’ alliance) fare any better than the latter to create a new ‘balance’ with Iran, as U.S. pundits are suggesting? Almost certainly not. Firstly, the term “balance” carries the defect of treating of ‘apples and oranges’ as if they were one and the same, whereas they are not.

The U.S., and to an extent Israel, are stuck with old strategic military thought. The U.S. is apt to see its necklace of military bases stretched across the Middle East as a signal of military strength. But recent events – particularly in Iraq – have exposed these bases to be more a hostage to fortune, rather than some looming muscular deterrence. In fact, it is precisely the vulnerability of these bases’ supply-lines to attack from Iraqi militia that has prompted the U.S. to announce that they wish to withdraw from Iraq.

Will then, Israeli bases inside UAE worry Iran? Hardly. All the Gulf energy and military infrastructure is exposed – out in the open – and not concealed below ground in fortified bunkers, as is that of Hizbullah and Iran.

What is less widely appreciated however, is how radar-eluding, drone swarms and smart ‘earth-hugging’ cruise missiles, have upended the conventional paradigm.

Dr Rubin, the founder and first director of the Israel Missile Defence Organization, which developed the state’s first national missile defence shield, wrote in the wake of the 14 September attack on Abqaiq, (the Saudi Armco oil facility) that it was: “A brilliant feat of arms. It was precise, carefully-calibrated, devastating yet bloodless – a model of a surgical operation … the incoming threats [were not] detected by the U.S. air control systems deployed in the area, nor by U.S. satellites … This had nothing to do with flaws in the air and missile defence systems; but with the fact that they were not designed to deal with ground-hugging threats. Simply put, the Iranians outfoxed the defence systems”.

In short, the ‘apples’ of old-think; of static ‘white elephants’ out in the open and protected by big-ticket U.S. missile air defence systems, are as obsolescent as sitting-duck carriers – i.e. they have been outflanked by Iranian ‘oranges’.

‘Balance’ therefore is not really the right word to describe two so different modes of defence. In fact, Iran’s strategy of no head-on confrontation with the U.S. or Israel – in favour of a dispersed and sometimes outsourced, threat to infrastructure hubs, coupled with the inherent opacity to the broadband origin of axis threats – has given Iran a deniable strategic edge.

Secondly – in respect again to ‘balance’- what his new military alliance does is to foreclose on UAE options: The U.S. is incrementally exiting from the region; Saudi Arabia is facing grave, quasi-paralysing problems; and Israel too, is in crisis, “on the brink of anarchy”, as Ben Caspit writes. China is angry at the UAE for its positioning as a front-line state.

Is it perhaps a touch hubristic for the UAE to elect to go head-to-head with two such military heavyweights as Iran and Turkey? The latter incidentally, is gradually assembling an Islamic Organisation to rival the Saudi-led OIC. The leadership of the Islamic world is far from assured to Saudi Arabia and the GCC these days –  there is an issue with being simply the legitimiser of U.S. interests.

There is too the more fundamental question of the mounting of this ‘front’, precisely at a moment of truly disastrous regional economic plight. Oil is at $37. The situation is beyond critical in Lebanon, Syria, Jordan, and Iraq (where the PM failed to persuade the U.S. either to release Iraq’s $60 billion–odd, oil revenues held hostage in a New York bank, or even to give the country a loan). Even the rich Gulf States are running through reserves and sovereign funds at a rapid clip. It is hard times all round. And the region’s inhabitants are getting angry –  and very desperate.

It is a race to the bottom – and the region may not survive in its present format. It is that bad. But polarisation and profound disunity between regional ‘fronts’, and within power elites, may prove to be the key driver of collapse – as all the energy required to make the perilous, radical changes needed to save the Middle East from anarchy and economic collapse are squandered on in-fighting and jockeying for control of a dwindling power at the centre.

These élites, already entitled and overly impressed with their wealth and power, have focused on these latter chimaera (a primary motive in the UAE-Israel hang-up) and on taking trying to take down their elite rivals (such as Qatar and Turkey), rather than face the need for radical reform.

To then introduce ‘Israel’ – the very definition of a disruptive and polarising wild card – into a folding élite capacity, so as to instrumentalise real regional reform, is an odd choice to make (but quite consistent with the type of advice likely to have been offered to the UAE by its consigliere Mr Blair). Does anyone really think the introduction of ‘Israel’ will facilitate the handling of the impending crisis? Will some joint ‘tech miracle’ really save the UAE and Israel? It is a rather competitive, over-fashionable niche these days!

One key signal (historically) to any impending crisis is the maintenance of pretence over reality. The flaw to finding solace in one’s recent gilded glory, as if something or other (i.e. Tech?) magically will restore that earlier status quo without sacrifice, loss of status or power. We have witnessed recently how the entitled élite in Lebanon has been unable to move beyond the status quo, in order to save themselves – and the country – from collapse.