HOME / WORLD / Why is the US Government Using Stolen Cash To Pay Doctors in Venezuela? 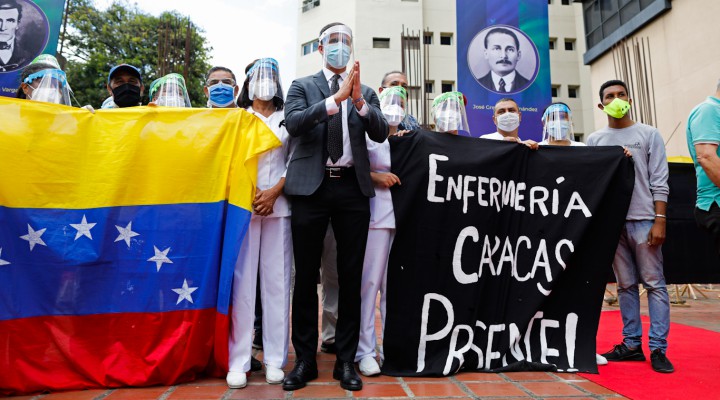 The US government is using cash stolen from the Venezuelan government as part of a hearts and minds campaign on behalf of opposition figure Juan Guaidó.

MPN– Venezuelan doctors currently fighting COVID-19 are receiving funding from an unlikely source: U.S. backed coup leader Juan Guaidó. Health workers, who sometimes earn less than $20 per month, are receiving $100 dollars monthly from the self-declared president of Venezuela. Where is Guaidó getting all this money from? The U.S. government, who, in turn, is using the billions of dollars it has confiscated from Venezuela to fund his latest political stunt.

The right-wing opposition inside Venezuela announced it was planning on distributing more than $18 million to the country’s 62,000 health professionals over the next three months; around $300 per person.

The money for the campaign comes from Venezuelan government assets and accounts in the United States, which the Trump administration has frozen as part of its ongoing war against the government of Nicolas Maduro, although it has not been disclosed exactly where from, only that it has come from Venezuelan “sovereign funds.” Part of that war has meant recognizing Guaidó — a previously virtually unknown politician — as the legitimate president of Venezuela. Economic warfare against the country began in earnest under President Obama, who declared and redeclared a formal state of emergency across the United States due to the “unusual and extraordinary threat to the national security” Venezuela supposedly posed.

However, the sanctions regime was drastically ramped up by President Trump, who has time and again declared his intention to overthrow Maduro. Sanctions have led to a near total worldwide blockade of Venezuela, with any company or nation trading with it cut off from the lucrative U.S. market. Trump has blocked the importation of lifesaving cancer and diabetes medicines, as well as medical instruments, leading to an estimated 100,000 deaths according to former UN Special Rapporteur Alfred de Zayas. Declared illegal by the United Nations, the sanctions have also stopped Venezuela exporting its primary product: oil. Due to the threat of U.S. sanctions, insurance companies have refused to work with Venezuelan oil companies, and without insurance, oil tankers cannot enter foreign ports. The result of the sanctions has been economic devastation for the country.

Since January 2019, Guaidó has attempted five separate, unsuccessful coups against the government, all with vocal U.S. backing. Though he is presented in Western media as a progressive social-democrat, or even a socialist, his party’s platform of mass privatization would be more reasonably compared to that of General Pinochet’s Chile. A leaked contract between Guaidó and U.S. mercenary Jordan Goudreau that stipulated that the ex-Green Beret would oversee the creation of a private death squad, ruthlessly putting down any dissent to his rule in the event of a successful coup, also suggests a more than passing resemblance to Latin American style fascism. Four more organizers of the botched May coup were arrested in Colombia last week.

While Guaidó enjoys overwhelming support from both Democrats and Republicans (despite Trump labeling him “the Beto O’Rourke of Venezuela” for his vapidity), he is not a popular figure inside his own country, unable to go anywhere without crowds of enraged people forming. Despite receiving a standing ovation from both parties at Trump’s State of the Union address in February, when he flew back to Caracas after a tour of the West, he was accosted by airline staff, pelted with trash from onlookers, covered in beer and other, less pleasant liquids and chased into his car to shouts of “traitor,” “murderer” and “fascist” from travelers. This incident was unironically described in the Western press as being “greeted by a throng of cheering supporters.” Recent polls from opposition-sympathetic pollsters show he has the backing of between three to four percent of Venezuelans, depending on the wording of the question.

Groomed from a young age by the U.S. government, Guaidó first came to public attention as a leader in the U.S.-backed student protests of 2007. Since then he has continually flown back and forth between Caracas and Washington for meetings, training, and negotiations.

With a flailing economy and a weak currency, a $10 monthly stipend for health workers currently battling the COVID-19 outbreak will certainly be a huge benefit to them. While the country’s initial coronavirus response successfully kept out a pandemic, returning immigrants helped spread the disease to the point where the country is experiencing around 1,000 new daily cases, with 460 total deaths nationwide. While the crisis has worsened, it is orders of magnitude better than neighboring countries such as Ecuador and Bolivia, where the country’s neoliberal rulers have let the pandemic rage almost unabated. Meanwhile, U.S. favorite Brazil has the second highest number of deaths of any country, at nearly 130,000, its president Jair Bolsonaro continually downplaying and denying the virus’ lethality, despite contracting it himself. We are “at the mercy of a deranged lunatic. This is no exaggeration,” wrote independent outlet Brasil Wire, despairing at his actions.

With a hotly-contested election coming up in November, many commentators on both right and left are warning of foreign interference. Venezuela, too, has its own elections this winter, Maduro inviting international observers from the U.N. and E.U. to oversee the vote, and pardoning over 100 opposition figures involved in political violence and coups. Still, those who are so outraged at the prospect of potential foreign meddling in domestic affairs appear unconcerned with the U.S.’ latest attempt to bribe the Venezuelan population into supporting regime change with its own government’s (stolen) money.

0 thoughts on “Why is the US Government Using Stolen Cash To Pay Doctors in Venezuela?”