HOME / SOCIAL/CULTURAL / “We Thought You Were Muslim”: Police in India Apologize for Beating Hindu lawyer 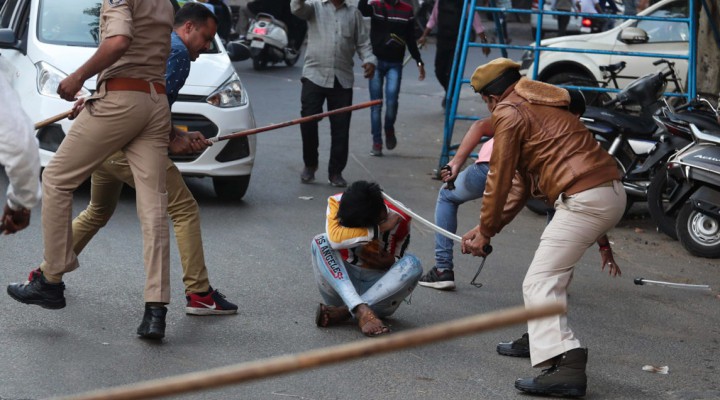 A group of Hindu policemen in central India beat a diabetic man seeking treatment at a hospital after they mistook him for a Muslim man because of his beard.

MPN– In the late afternoon of March 23, 32-year-old lawyer Deepak Bundele was on his way to a hospital in Madhya Pradesh state in central India. A diabetic, he was there to pick up lifesaving medicine. Before he could make it inside, he was accosted by local police. As he began explaining to the police what he was doing outside, one officer slapped him, whereupon he was set upon by the rest, who beat him with wooden truncheons, continuing to hit him even after he fell to the ground. Bundele says he continued to bleed for three days after the incident, and the police only stopped after they found out he was a lawyer (and a former journalist), but by that time, he was bleeding from a number of orifices in his body.

Shame on you, MP Police.
You're a bunch of communal bigots.
Deepak Bundele, a lawyer was beaten up brutally by the police.
MP Police Apologise for Beating Lawyer, 'We Thought You Were Muslim,' They Say#Islamophobia_In_India pic.twitter.com/CsDs1qMmqz

Now, two months later, the police have apologized, asking him to withdraw his complaint against them. In a phone call Bundele recorded and shared with national media, a state police representative said:

“We are truly embarrassed because of the incident. If you want, I can bring those officials and make them apologize in person to you. They mistook you as a Muslim and assaulted you since you had a long beard. And the man (who assaulted you) is a staunch Hindu…In Hindu-Muslim riots whenever a Muslim is arrested, they always beat them up brutally.”

The police representative begged him to rescind his complaint, noting that he had “at least 50 friends from your [high] caste,” seemingly convinced this was a key bargaining chip.

“All those people are ashamed that they did something like this to a Hindu brother without knowing his identity. We do not have any enmity against you. Whenever there is a Hindu-Muslim riot, police always supports the Hindus; even Muslims know this. But whatever happened with you was because of ignorance. For that, I have no words,” he added.

Bundele replied that there were no riots that day, asking directly whether he was beaten up simply because he “looked Muslim.” “Yes, exactly,” the officer replied, appearing to believe the response cleared everything up.

Incidents like this have become an increasingly common occurrence in India under Prime Minister Narendra Modi’s Hindu nationalist rule. Senior politicians from his Bharatiya Janata Party (BJP) government have spread conspiracy theories that Muslims across the country are intentionally infecting Hindus as part of a “Corona Jihad,” leading to mob violence against the country’s largest religious minority. In February, dozens of people were killed in Delhi and other states when Hindu mobs launched a campaign of anti-Muslim pogroms which was only dampened by India’s lockdown orders.

Modi and the BJP’s ideology has been described as a blend of Indian-style fascism with a strong belief in free market economics, combining Hindu chauvinism with the privatization of state resources. Fascism tends to flourish in economically uncertain times, where the far-right begins to organize disillusioned members of a dominant religious or racial group, turning their anger away from those at the top, and redirecting it to smaller, subordinate groups. The massively increasing inequality in India, where hundreds of millions live economically and socially precarious lives while a spoiled few live in luxury, has proven to be fertile soil for the BJP, who won re-election in a landslide last spring in campaign rife with xenophobic rhetoric against Muslims.

After the end of British rule in 1947, the Indian subcontinent was split along religious lines into Hindu-majority India and Muslim majority Pakistan and Bangladesh. The process led to an estimated one million deaths in the communal violence that swept over the region. Still more died on the road, desperately trying to get to the newly created country of their religion. In February, a member of Modi’s cabinet said India made a mistake by not committing a full genocide against its Muslim population in 1947.

Modi himself was a member of the Rashtriya Swayamsevak Sangh (RSS), a far-right Hindu paramilitary with over 5 million active duty members, responsible for much of the intimidation and fear the subcontinent’s Muslim population feels. While Chief Minister of Gujarat state in 2002, he oversaw a massive wave of Islamophobic pogroms that led to over 2,000 deaths and 200,000 Muslims being driven from their homes.

Two of the BJP’s most controversial laws have been the Citizenship Amendment Act (CAA) and the National Registration Council (NRC). The CAA makes it easier for people from neighboring Muslim-majority countries to apply for Indian citizenship– if they are Hindu, Christian, Buddhist, Sikh or Jain. But it explicitly rejects certain classes of people it deems as undesirable, especially Muslims.

Bundele, therefore, was far from the first to feel the force of Hindu fascism, although he was one of the few victims that was Hindu himself. The fact that the police’s excuse for subjecting him to a severe public beating was that they mistakenly thought he was a Muslim goes to show how far down a dangerous path India has gone.

0 thoughts on ““We Thought You Were Muslim”: Police in India Apologize for Beating Hindu lawyer”