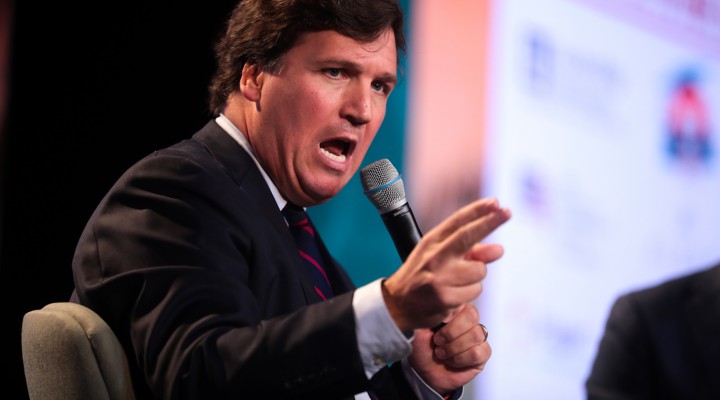 That Tucker Carlson is one of the few pundits willing to report on a bombshell revelation about a chemical attack in Syria, may say more about the state of the corporate press than it does about Carlson’s character.

MPN– Dozens of people were found dead in the Syrian city of Douma in April 2018 in what appeared to be a chemical weapons attack. The United States and its NATO allies immediately pointed the finger at Syrian President Bashar al-Assad, accusing him of crimes against humanity. Almost immediately, NATO forces began a retaliatory bombing campaign, with many others calling for an invasion to protect civilians from a massacre.

Mainstream media, often presenting themselves as the home of the resistance to the dangerous madman Donald Trump, were fully behind the bombings. A survey by Fairness and Accuracy in Reporting found that not one of the top 100 U.S. newspapers by circulation opposed the airstrikes.

A report from the Organization for the Prohibition of Chemical Weapons (OPCW) gave some credence to Washington’s assertions. While far from conclusive, OPCW’s report on the incident did suggest that it was “likely” that there was indeed some form of chemical weapons used, possibly an air attack that involved dropping chlorine canisters on the city. Although the OPCW refused to speculate on who was responsible, the suggestion of an aerial strike indicated Syrian government forces, the most equipped for such an attack, were to blame.

Last month MintPress News was one of a small number of alternative media outlets to report on a secret meeting between an OPCW whistleblower and a panel of international experts, including the former head of the OPCW Dr. Jose Bustani, in which the whistleblower claimed that key information about the attack was suppressed “to favor a preordained conclusion.”

It is perhaps unsurprising, therefore, that American media have shown little interest in an email published by Wikileaks Saturday from another member of the fact-finding team expressing his “gravest concern over intentional bias introduced to a redacted version of the report he co-authored.” He claims that the findings were intentionally doctored by those in higher positions to “misrepresent the facts” and support an agenda, asserting the report “morphed into something quite different to what was originally drafted.” He accuses the OPCW of “selective omission” that “undermines the credibility of the report.” It transpires that many of the OPCW fact-finding team believed that the canisters were placed by hand and could not have been dropped from above, suggesting an altogether different incident.

The new revelations that suggest an entire military campaign was launched on false premises has been steadfastly ignored or downplayed by much of the mainstream press. A CBS News’ headline, for example, claims the whistleblower is merely claiming the report is “biased,” which strongly undersells the severity and the implications of the allegations.

One of the few places where the news was reported seriously was Fox News’ Tucker Carlson Tonight. On November 25, Carlson criticized the immediate consensus that developed in Washington over what happened.

"We've been lied to, we've been manipulated, we knew it at the time." pic.twitter.com/vKw6YnphcT

“Universal bipartisan agreement on anything is usually the first sign that something deeply unwise that something is about to happen, if only because there is nobody left to ask skeptical questions. And we should be skeptical of this, starting with the poison gas attack itself” he stated.

“It didn’t matter that there was literally no evidence. Everybody in Washington began agitating for regime change war immediately. Immediately!” Carlson added, becoming visibly agitated, claiming that, “America almost attacked a country and killed untold thousands of people over an attack that may never have happened in the first place.”

Carlson was immediately condemned by liberal media watchdog Media Matters, who accused the Fox News host of “spreading disinformation” and “backing Russian and Syrian claims” about the incident. Other individuals, such as Tulsi Gabbard, have also been attacked as Assadists for questioning U.S. intervention in Syria. Journalists, too, have been smeared as such. A September report from U.S. government-funded investigative website Bellingcat labeled MintPress News and a host of figures, including journalists Max Blumenthal, Rania Khalek and former Green Party Vice-Presidential candidate Ajamu Baraka as part of a pro-Assad network infiltrating American society. Bellingcat also claimed that the Syrian government “rewards” both the left and the right, refusing to accept any questioning of Washington’s narrative as legitimate. Nevertheless, the more revelations that come out, the harder it is to align the government’s position with reality.