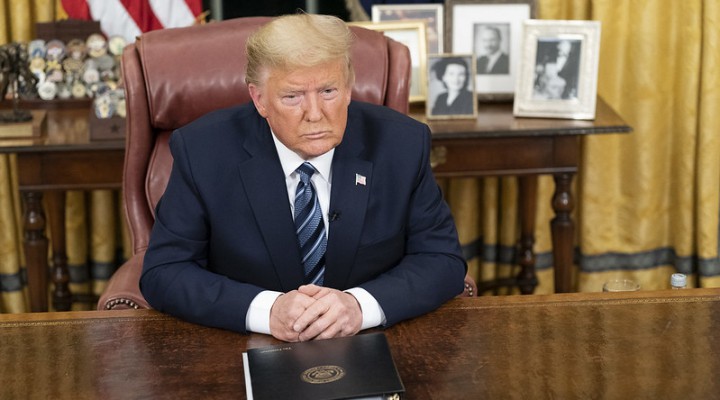 No matter how much Fox News tries to spin it, President Trump’s handling of the COVID–19 pandemic has been little short of disastrous. For weeks, he wrote the virus off as a liberal “hoax” designed to force him out of the White House. Rather than providing leadership at the top, his main concern appears to be shifting American anger towards China, insisting on calling the pandemic the “China virus” and demanding Beijing be held to account for their supposed mishandling of the coronavirus. He also appears to be actively blocking New York State’s attempts to procure thousands of lifesaving ventilators. “I have a feeling that a lot of the numbers that are being said in some areas are just bigger than they’re going to be,” he told Sean Hannity on Thursday, adding that, in the midst of a seemingly exponential rise in cases, that he wants to “start opening up certain parts of the country” again, because the cure can’t be worse than the disease.

Unlike in other countries, testing for the virus remains extremely limited. Germany, a country with a far smaller population, has been testing 500,000 people per week. The US has still not reached that number in total. As Danny Haiphong wrote: “A deep thirst for profit among powerful elites dictates all social policies and organizations in the United States and this thirst has deadly consequences.” Trump’s subsequent pronouncement that the churches should be full on Easter Sunday was perfect proof of this, and will doubtless lead to an untold number of deaths.

Trump’s air ball on the most important test of his presidency should lead to a slam dunk opportunity for the Democratic Party come November. And fortunately, they have a perfect candidate for the crisis: Bernie Sanders. An unprecedented public health crisis requires a public healthcare solution. Sanders has been championing and popularizing Medicare for All. His proposals are popular: some polls show that 70 percent of the public, including a majority of Republicans, support it. Not only that, but 91 percent of peer-reviewed studies of a Sanders-like healthcare plan alsoconclude that it would actually save the United States money, 86 percent showing it would immediately begin paying off in year one. Bernie remains the country’s most popular senator and has a massive and dedicated army of activists willing to work for him.

But instead, the Democratic Party appears intent on selecting former vice-president Joe Biden as their candidate, immediately coalescing around him before Super Tuesday. Biden is the consummate party insider, dogged by corruption scandals and a long history of terrible voting and policy proposals. He recently suggested that he would automatically veto any Medicare for All proposal as president, even one that had already been passed by the House and the Senate. Worse still, he has now been credibly accused of raping a former staffer, Tara Reade.

Holed up in his own house, and making an unending series cringe-worthy gaffes that show his cognitive decline every time his handlers allow him to interact with media or the public, the former Delaware senator increasingly looks like yesterday’s man, as Branko Marcetic has written.

In contrast, Sanders is showing real leadership. The 78-year-old is not self-isolating, but fighting for workers’ and unemployment rights to be included in bailouts, leading virtual town halls online, informing the public of what is going on.

Nevertheless, Biden is looking like an increasingly certain bet to lose to Trump in November, if he even makes it that long as the nominee. Already, Andrew Cuomo is being floated by many in the establishment as a possible substitute. However, for many in the Democratic elite, they believe have already won the real election. If Sanders is vanquished, a member of the corporate elite will become president in November, whether it will be the human corporation in Trump or the “Senator for MBNA” in Biden.

If we are not going to choose sacrificing the population to serve the market, as many Republicans are now demanding, COVID–19 means implementing huge wealth redistribution measures to keep the country going and starting comprehensive, socialist-style policies that will give the public ideas about how society should be run in the future. Sanders is the obvious choice for anyone committed to beating Trump. But the Democrats are intent on blowing the layup to ensure that the wealth of the country stays in the hands of the superrich.