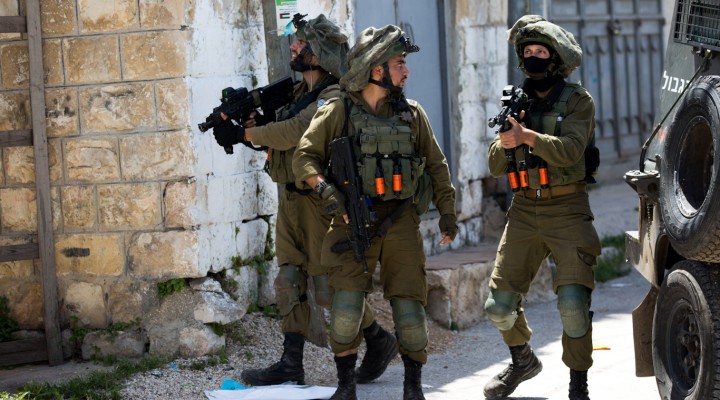 The IDF admitted that they put the explosives on the commonly used road, doing it to “create a deterrence,” because “riots have regularly occurred” in the area.

MPN- A seven-year-old Palestinian boy was walking with his mother just outside the West Bank village of Kafr Qaddum a few miles to west of the city of Nablus. Seeing a strange orange and black package held down with some rocks, the boy approached, thinking it was a toy. His mother quickly stopped him, summoning a relative to investigate. Foolishly, the man shook the package and it exploded, injuring his face and hands.

Along the popular path they found another device, this time photographing it and throwing stones at it until it too exploded.

That device was housed in a metal box used by the Israeli Defense Forces (IDF) to store grenades, Israeli outlet Haaretz reports. That evening, after the images had caused outrage on social media, Israeli military units came and neutralized a third IED they had left on the path.

ICYMI: IDF soldiers planted live explosives near Palestinian village as “deterrence” against protesters. If you doubt this is terrorism, imagine what you would call it if the roles were reversed.https://t.co/14wFsLQ8qt

IDF sources freely admitted that they put the explosives on the commonly used road, doing it to “create a deterrence,” because “riots have regularly occurred” in the area. Kafr Qaddum is known as a hotbed of protest against the Israeli occupation, suggesting this was done in response to their activism. Warning signs, written in Hebrew only, were found close to the IEDs. “People live there, and children wander around,” said the injured man, “it’s lucky nothing worse happened.”

This is how armed gangs operate, not a regular army. But the action reflects the spirit of the army’s commanders and the government, both of which send the message that Palestinian lives and limbs are fair game.”

“When this story came to me I did not believe it was true. But it is,” said Haaretz’s Hagar Shezaf, who covered the story. Yet despite the fact that she obtained confessions from IDF sources, she entertained the idea that the whole thing was a Palestinian false flag operation.

Needless to say, placing explosive devices in civilian areas is a serious war crime. However, compared to the weeks-long bombing campaign against Gaza it is currently undertaking, planting some IEDs is perhaps a minor incident. Western media have shown little interest in covering the campaign, reflexively taking the Israeli side when doing so. Indeed, Canadian broadcaster CBC issued a public apology for using the word “Palestine” on air during an interview.

The humanitarian fallout from the bombing is likely worse than the bombing itself. The only power plant in Gaza has been forced out of action, and Israel is limiting the area to only three to four hours of electricity per day by restricting fuel imports. Oxfam warns that the conditions are likely to spark a COVID-19 epidemic that authorities will not be able to handle. Gaza has only 97 intensive care hospital beds, and people’s access to clean water has shrunk from 80 to 20 liters per day. “People are forced to choose between hygiene and food,” explained Shane Stevenson, Oxfam’s country director for Israel and Palestine.

Malnutrition has also reached the point of crisis, with one third of Palestine (and over two-thirds of Gazans) food insecure, according to the World Food Program, who found that nearly eight percent of Palestinian children under the age of five showed moderate to severe signs of stunted growth.

The United States holds a huge amount of influence in the region. However, both political parties appear steadfast in their support for Israeli actions. Trump has emboldened Netanyahu to announce the annexation of much of the fertile Jordan Valley, while the Democratic ticket seems eager to outdo the president. “I pledge to you the Biden-Harris administration will sustain our unbreakable commitment to Israel’s security, including the unprecedented military and intelligence cooperation pioneered during the Obama-Biden administration and the guarantee that Israel will always maintain its qualitative military edge,” Harris said at a fundraiser on Wednesday.

On the subject of the IEDs, Haaretz was concerned enough to print an editorial. “This phenomenon must be shut down and those responsible punished. The IDF must make sure there are no more such devices in the area, and that there are no other locations where orange boxes await curious children or their parents,” they wrote. Whether the IDF heed their words remains to be seen.

Feature photo | Israeli soldiers in the Palestinian town of Yabad near the West Bank city of Jenin, May. 12, 2020. Majdi Mohammed | AP