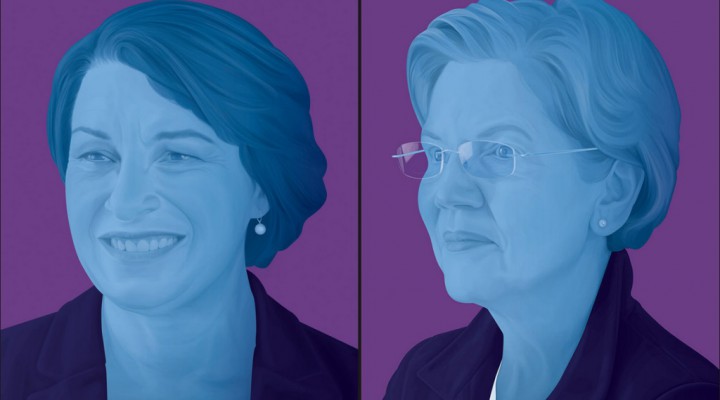 The New York Times’ recent endorsement (1/19/20) of both Sen. Elizabeth Warren and Sen. Amy Klobuchar for the Democratic presidential nomination seems to have stirred up as much anger as when Time (12/25/06) selected “you” as its person of the year in 2006. CNN (1/20/20) mocked the Times’ “utterly confusing” decision as inconsequential. Others claimed it “reeked of ignorant pomposity” (the Federalist, 1/22/20) or that it “fails us all” (Nation, 1/21/20). Meanwhile, the Atlantic’s David Frum (Twitter, 1/20/20) said the board should “Quit mumbling and worrying about upsetting readers and forthrightly SAY, ‘Anybody but Bernie [Sanders].’” 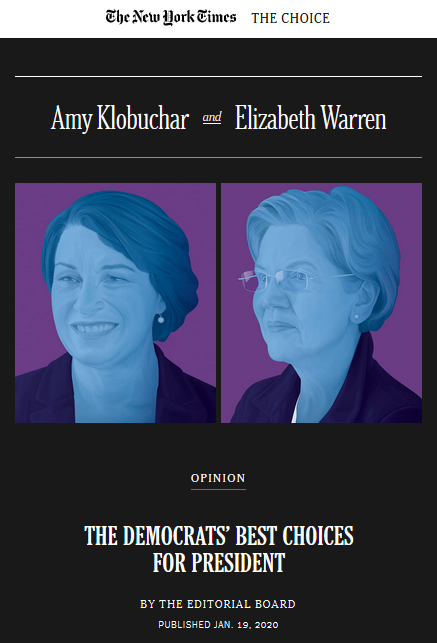 After condemning Trump for his “white nativism,” the Times’ editorial board directly compared him to Sanders—“we see little advantage to exchanging one over-promising, divisive figure in Washington for another”—while also dismissing the other nationwide frontrunner, Joe Biden, as being too old. Perhaps unfortunately, given her discredited claims of Native American identity, it called Warren a “gifted storyteller,” and praised her for watering down her Medicare for All plan. It described Klobuchar, for her part, as “the very definition of Midwestern charisma,” and confusingly asserted that she represents “the best chance to enact many progressive plans”—most of which corporate media have commended her for opposing (FAIR.org, 7/17/19).

However, for those who support any of the other Democratic candidates, there is good news; the Times has a distinctly poor record of picking winning candidates, often making tragically comical predictions and assertions in its endorsements.

In 2016, for instance, it confidently told its readers (1/31/16), “John Kasich is the only plausible choice for Republicans” in the primaries, brushing off Donald Trump’s bid and dismissing his proposals to deport Mexican or bar Muslim immigrants, or increase tariffs on Chinese goods, as “applause lines” that he “invents…as he goes along.”

Eight months later, the editorial board (9/25/16) endorsed Hillary Clinton in the general election, even though she might “appear, on the surface, not to offer change from an establishment that seems indifferent and a political system that seems broken.” Calling her a “determined leader intent on creating opportunity for struggling Americans” and making the US a “force for good in an often brutal world,” the paper said she would “need to find common ground with a destabilized Republican Party,” praising her “unusual capacity to reach across the aisle.” It offered no advice on how she might reach those Democratic voters who saw her as part of an indifferent establishment, whose failure to turn out cost her an Electoral College victory.

The Times (1/25/08) also “strongly endorsed” the “inspiring” Clinton over Barack Obama in 2008, calling her a “both uniting and leading” figure who was highly skilled at “winning over skeptical voters and then delivered on her promises.” How did that turn out? 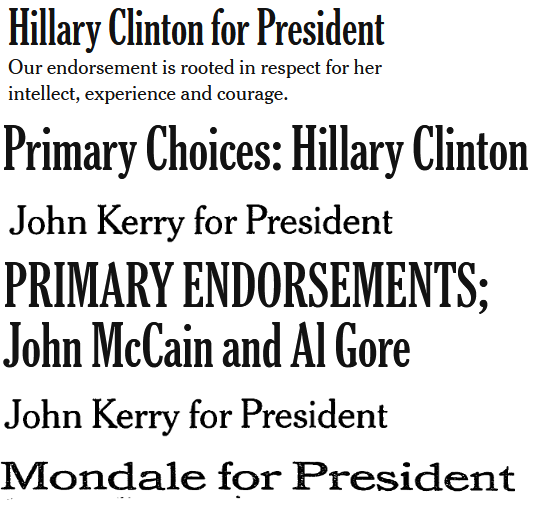 In 2000, the editorial board picked losers in both the primaries and the general, endorsing John McCain for the Republican nomination (3/5/00) and Al Gore for president (10/29/00). It chose Gore despite suggesting that George W. Bush would be “the most moderate Republican nominee in a generation,” and praised him for his commitment to fair play during the campaign, an ironic statement given the Republicans’ shenanigans in Florida just one week later.

One could argue that the Times’ presidential pick was not a loser, since Gore did not actually lose the election. But in the midst of the judicial process that would award the presidency to Bush by fiat, the editorial board made the highly perishable observation that “American courts have been vindicated as a place of shelter and protection for fairness and democratic values.” And after the Supreme Court halted the recount, the Times was quick to reassure: “Our national history bears the comforting lesson that the American people’s confidence in the rule of law and the stability of their institutions will not be damaged in the long run.”

By the 2004 election, the New York Times editorial board (10/17/04) had realized that Bush was no moderate, but had “turned government over to the radical  right.” It therefore “enthusiastically” supported losing candidate John Kerry, although it criticized his campaign for being more about opposition to Bush than support for Kerry—before issuing an endorsement that attacked the incumbent while largely failing to make a positive case for its chosen candidate.

The Times has historically favored Democrats over Republicans, even during periods of GOP dominance. It endorsed Walter Mondale in 1984 (10/28/84) and Michael Dukakis in 1988 (10/30/88), praising their “pragmatic” centrist agendas, before later deciding that the reason they lost was that they were too left-wing (FAIR.org, 8/21/19).

The New York Times is often described as the paper of record, perhaps the most influential newspaper in the world. However, its ability to persuade the wider public of the qualities of certain candidates running for office may be overstated. Its decision to back two candidates—one of whom has lost nearly half her support since October, and another whose polling average has never risen above 4%—will likely not be a kiss of death to others running. If history is any judge, the New York Times endorsement is a mixed blessing, at best.