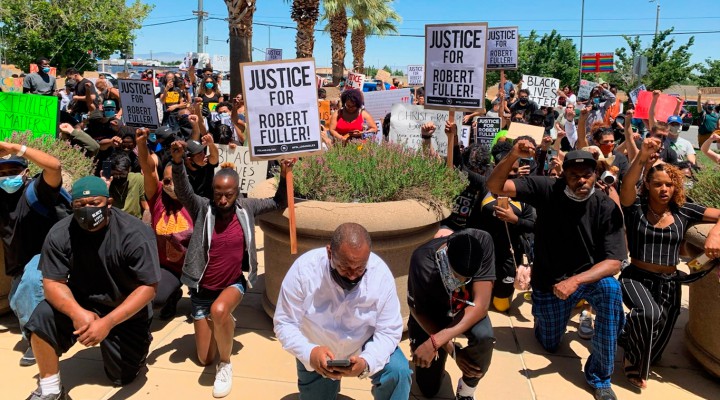 As the nation grapples with long-simmering racial tensions reignited by the murder of George Floyd, a series of suspicious hanging deaths of black men is sparking fears of a new wave of anti-black terror.

MPN– Amid nationwide demonstrations that have brought racist violence to public attention, at least four black people have been found hanged in suspicious circumstances, sparking fears that the incidents mark a wave of lynchings, not seen for decades. The cases are also bringing renewed attention to other recent hanging deaths involving people of color, including the 2019 death of a black transgender woman, Titi Gulley, and the June 15 death of a Hispanic man in Houston. Foul play is not suspected in the case of the Hispanic man, but police have reopened the investigation into the death of Gulley at the family’s request.

The body of 27-year-old black man Dominique Alexander was found hanging from a tree in Manhattan. And in Houston, a black teenager was found hanged on Tuesday. Police ruled both deaths to be suicides.

Perhaps more troubling, however, are the cases of two black Californians found hanged. On the morning of May 31, after responding to a 911 call, firefighters found Malcolm Harsch’s body hanging from a tree. Police appear confident there was no foul play; “There was nothing. There was nothing else found at the scene other than the rope, which was used to hang the victim, and the contents of his pocket, as well as a backpack he was wearing,” said Capt. Kent Wegener of the Los Angeles County Sheriff’s Department.

But Harsch’s family strongly disputes the police position. “The explanation of suicide does not seem plausible,” they told the Victor Valley News. “[We] feel that our brother’s death will be waved off as a suicide to avoid any further media attention… There are many ways to die but considering the current racial tension, a black man hanging himself from a tree definitely doesn’t sit well with us right now. We want justice, not comfortable excuses,” they added.

Harsch’s sister insisted that the police’s explanation “doesn’t sound right,” noting he was anything but suicidal, also pointing out what she sees as inconsistencies with the official narrative: “My brother is 6’3.” That tree was four feet… My brother was tied to a tree with a HDMI cord. Someone took their time with that knot, took their time tying this! It was too perfect, too perfect!” she said on her Facebook page.

Less than two weeks later, the LA County Sheriff’s Department was once again forced to dampen rumors of another lynching. 24-year-old Robert Fuller was found hanging from a tree in Palmdale. “Although the investigation is on-going, it appears Mr. Fuller, tragically, committed suicide,” they declared. Yet Fuller’s death was, if anything, more suspicious than those previously mentioned. For once, he was found swinging from a small and weak-looking tree in the center of a leafy square surrounded by restaurants and right in front of Palmdale City Hall and the Council Chamber. While it is certainly possible he could have climbed the tree and hanged himself, the location could barely have been more conspicuous.

As with Harsch, Fuller’s family does not believe he killed himself. “Everything that they’ve been telling us has not been right,” said his sister at a public demonstration in the square where he was found. “Staring at this tree, I don’t make no sense! My brother was tall. My brother was not suicidal.”

Black Lives Matter Los Angeles was even more skeptical, writing: “Two Black men were found hanging from trees in California in the last 2 weeks… Authorities are calling them suicides. What Black man do you know who hangs himself from a tree? These are lynchings. Not ‘modern day lynchings,’ old school ones.” The Los Angeles Times’ editorial board has also expressed doubt over the police account and called for a full investigation.

One family member not expressing skepticism over the story is Fuller’s half-brother Terron Jamal Boone. This is because the same police force that ruled Fuller’s death a suicide shot and killed him yesterday, in an incident hardly likely to reduce tensions. A large number of key activists from the protests in Ferguson in 2014 have also died in highly suspicious circumstances.

Who the fuck climbs a tree ,sit on a branch tie a rope and hang themselves? Like I’m trying to picture it in my head and i can’t see it .These hangings are not suicide it’s MURDER ….and the timing ?

New research published this week shows that almost 6,500 people were lynched between 1865 and 1950 (2,000 more than previously thought), the majority of them in the south. Until the mid-20th century, the practice was relatively common, meaning that considerable numbers of Americans alive today witnessed them. The point of lynchings, according to the NAACP, was to reassert control over the newly freed black population through terror. As such, they represented an explicit reaction to a black population trying to organize for and assert its rights.

Blood on the leaves and blood at the root

After over 100 years of attempts, the House of Representatives finally passed an anti-lynching bill in February this year. However, the bill that would make the practice a federal hate crime is meeting stiff opposition in the Senate, primarily from Kentucky Republican Rand Paul, who is stalling the process. He argues that the anti-lynching legislation is drafted too broadly and could define minor assaults as lynching. “The bill as written would allow altercations resulting in a cut, abrasion, bruise, or any other injury no matter how temporary to be subject to a 10-year penalty,” Paul said. “My amendment would simply apply a serious bodily injury standard, which would ensure crimes resulting in substantial risk of death and extreme physical pain be prosecuted as a lynching.”

If the families of the deceased are to be believed, the bill could be put to use sooner than expected.

Correction | An earlier version of this article stated that five people of color had been hanged since the protests began but one of the hangings was from 2019. The article has been updated to reflect this information.

Feature photo | Activist Najee Ali, center, kneels with demonstrators, June 13, 2020, in front of the Palmdale Sheriff’s station in Palmdale, Calif. People marched to demand an investigation into the death of 24-year-old Robert Fuller, who was found hanging from a tree early Wednesday near City Hall. Josie Huang | KPCC | LAist via AP