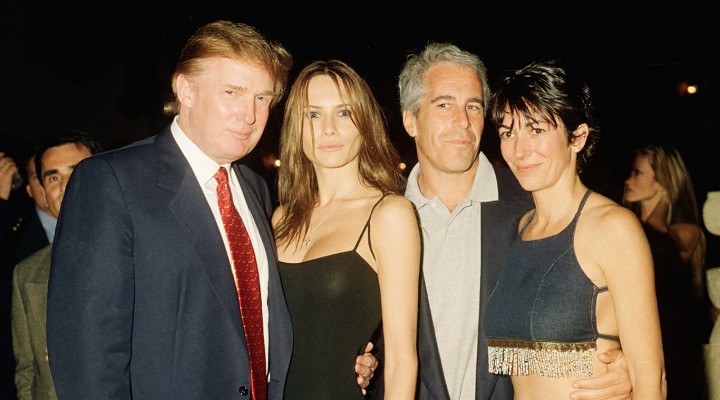 A study conducted by MintPress’ Alan Macleod revealed that both MSNBC and Fox News intentionally slanted their coverage to highlight Epstein’s links to either Bill Clinton or Donald Trump.

MPN– The Jeffrey Epstein saga continues to rumble on. Earlier this month, the deceased sexual predator’s longtime associate Ghislaine Maxwell was arrested and charged with luring and grooming children into his sex ring. Epstein, who died in prison in suspicious circumstances last August, was connected to huge swaths of the global elite, counting billionaire business owners, hotshot lawyers and professors, members of the royal family, and foreign leaders among his closest acquaintances.

Perhaps the two most important and notable, however, given their enormous influence, are former President Bill Clinton and current President, Donald Trump. Clinton, already infamous for the numerous women accusing him of sexual misconduct (including rape), is known to have flown all around the world with Epstein on his private jet, the Lolita Express, which he used to ferry girls to his private Caribbean island where he allegedly imprisoned and raped them. Locals report seeing the former president there.

President Trump also has deep ties to the disgraced New York fraudster. “I’ve known Jeff for fifteen years. Terrific guy,” he said in 2002, “He’s a lot of fun to be with. It is even said that he likes beautiful women as much as I do, and many of them are on the younger side. No doubt about it.” Like Clinton, Trump was also a flyer on the Lolita Express, Epstein claiming both that it was he who introduced him to his wife Melania and that Clinton “owed him some favors.”

The office of the president of the United States is the most powerful in the world. Epstein is known to have cajoled and blackmailed his powerful associates. Did the two presidents’ connections to him influence U.S. public policy? If we do not investigate, we cannot know.

We rely largely on the corporate press to carry out such investigations, shaping our understanding of the world in the process. However, the great majority of what we consume comes mediated through ultra-partisan outlets pushing a clear agenda. The two most widely viewed networks in the U.S. are Fox News and MSNBC, both of which have clear party loyalties, Fox to the Republicans, and MSNBC to the Democrats. Unfortunately, as well shall see, they are both spinning the Epstein story hard to shield their champion from blame while simultaneously demonizing the opposing president. As Liz Franczak from the Epstein-focused TrueAnon podcast said, the story, “so perfectly encapsulates and implicates both sides of the ruling class and yet you have these polarized sides, team red, team blue, pulling out what they want for their own purposes and refusing to understand, see or even admit that this crosses both. This encapsulates everyone.”

Media have already been under the spotlight for their poor coverage of the affair. Epstein is known to have had connections to influential media figures like George Stephanopoulos, Katie Couric, Charlie Rose in addition to some of the media’s biggest sponsors, such as Bill Gates. Last year, ABC News anchor Amy Robach was caught on a hot mic lambasting network executives for killing her investigations into his network — precisely because of his connections — allowing him to remain at large for three more years. Yet the only one facing consequences was the producer accused of leaking the clip in the first place, not those who protected, “ the most prolific pedophile this country has ever known,” as Robach described him.

In order to gauge the level of partisan coverage, this study analyzed all articles or show transcripts from MSNBC.com featuring the words “Jeffrey Epstein Donald Trump” or “Jeffrey Epstein Bill Clinton” and all results appearing under the “Jeffrey Epstein” topic on FoxNews.com, counting the number of articles mentioning each president’s links to the deceased sex offender. The date range was July 6, 2019 (Epstein’s arrest) to July 13, 2020 (the first day of data collection). Full documentation can be found here. The results were exactly as Franczak suspected, with both networks showing a strong bias (an over 2:1 ratio) towards associating the opposing party to the pedophile, while downplaying their own candidate’s incriminating ties to him. 19 MSNBC articles or segments mentioned Clinton’s links to Epstein, as opposed to 45 for Trump. But Fox News flipped that on its head, associating Epstein far more with Clinton (78 times) than with Trump (37 times).

While these findings already reveal a great disparity in the coverage, they actually undersell the level of bias in reporting because they do not take into account the quality and context of the references. On the MSNBC show, “The 11th Hour,” a former federal prosecutor reacted to the news of Epstein’s arrest by saying “I’m a lifelong Democrat. If there are Democrats in there, let it come out. If there are Republicans in there, let it come out. This should not be about politics. This is – if anybody abused those girls, it ought to come out and they ought to be prosecuted and I’m for it.” Host Brian Williams responded: “Yes, hear hear, I think most thinking individuals would agree with that.”

But the media didn’t do that. MSNBC constantly stressed Trump’s connections to Epstein, downplaying Bill Clinton’s own links. Indeed, on July 17, 2019, five separate MSNBC shows centered around the Trump-Epstein connection, but only one noted any link to Clinton, and even that was merely when a guest began listing a number of powerful people he had ties to, and was not brought up again, the show going back to discussing at length Trump’s complicity. Nevertheless, this counted as one hit for Trump, and one for Clinton. Meanwhile, Fox News did the same but in the opposite direction, putting great emphasis on the former president’s ties to the notorious sexual predator, and rarely discussing the current president in relation to him. Many of Fox’s mentions of Trump were included merely as a sentence of background information, for example, a July 8, 2019 article noting, “Epstein, who once counted as friends former President Bill Clinton, Britain’s Prince Andrew and President Trump, was arrested Saturday after his private jet touched down from France.”

In its “Five Details to Know” article on Epstein, Fox included a section called the “Bill Clinton Connection” where it (accurately) described their long history, his multiple trips on the Lolita Express, and meetings they had in New York. But it did not mention any connection to Trump whatsoever. Indeed, the network appears to have gone to some lengths not to implicate the president, earlier this month cropping Trump out of a photo of Epstein and Maxwell it used to illustrate a segment.

“Bill Clinton flew many times on Jeffrey Epstein’s private jet. A private investigator told us that one of the co-pilots said Bill Clinton flew on the plane without secret service a few times and while young girls were dressed up as candy stripers. Now, new photos have emerged showing the former President on Epstein’s plane and with Epstein’s alleged madam. Here he is with Ghislaine Maxwell, who is under FBI investigation for engaging in alleged underaged sex trafficking. Ghislaine Maxwell also attended Chelsea Clinton’s wedding.”

Watters went on to show viewers a number of incriminating pictures of the ex-president. On Epstein, Tucker Carlson stated that, “He got away with it because he was affluent and he had many powerful friends like Bill Clinton.” Yet Fox was far more likely to miss an opportunity to impugn Trump. In dozens of articles detailing Virginia Roberts’ allegations against Prince Andrew, Fox often highlighted how Roberts accused Clinton of staying on Epstein’s private island, but only two mentioned that the 16-year-old Roberts was working for Trump at his Mar-a-Lago resort when she was trafficked by Maxwell.

MSNBC was just as likely to play down unhelpful Epstein connections. Only ten minutes into a segment called “Why Trump’s White House is linked to Jeffrey Epstein sex trafficking case” did host Brian Williams mention Clinton’s connections to Epstein, before quickly returning to Trump. Likewise Chris Hayes began a report on Epstein’s arrest with the words, “A notorious convicted sex offender and friend of Donald Trump, a man whose escaped serious accountability for years seemingly thanks to it as enormous wealth and social connections is now behind bars.” He later went on to say that “Epstein is connected to some of the most powerful people in America in the world including Bill Clinton, Alan Dershowitz, Prince Andrew, and yes President Donald Trump – about which more in a bit,” before launching into a long discussion of the Trump-Epstein connection. Both these examples were coded as one article mentioning Trump and one for Clinton, despite the obvious disparity in emphasis. For this reason, the study also counted the number of articles and segments specifically centering on each president’s relationship to the billionaire criminal. These findings give a more accurate assessment of the level of partisan coverage, with 15 MSNBC pieces targeting Trump, but only 2 for Clinton, whereas Fox News was its opposite, with 13 on Clinton but only one for Trump.

Much of the time Clinton was brought up on MSNBC it was as an accusation made by Trump, which hosts and guests quickly challenged. On the August 13 edition of Hardball, for instance, Clinton was only mentioned in connection to Epstein because Trump had the “chutzpah” to “trash his name,” according to host Chris Matthews, his guest Paul Butler, a former federal prosecutor, immediately turning the attack back on him, stating:

Thus, both networks did their level best to maintain the illusion that their champion remained relatively taint-free, while the other president was deeply implicated in the scandal, feeding into a climate of extreme polarization, where each side believes that the other is hopelessly implicated, while theirs remain relatively blameless. Regular viewers of each network would routinely be presented with great details about the enemy president’s crimes, but, if relying solely on that network for information, would be largely clueless about their own president’s profoundly suspicious links. Indeed, MSNBC has not mentioned Clinton with regards to Epstein since last September.

The Epstein story should not be a left-right issue. Instead, it exposes how so many of those at the top of society belong to a sordid network of extremely wealthy and powerful people, sharing far more in common with each other than they do with the rest of us. His connections to all manner of business tycoons, royals, celebrities and politicians from both sides of the political spectrum expose the system as rigged and fundamentally corrupt. Yet corporate media, who we rely upon to inform us and curate our reality, have managed to make even Epstein a partisan affair by constantly emphasizing only one party’s connections to the pedophile. Hats off to them: it was not an easy achievement.