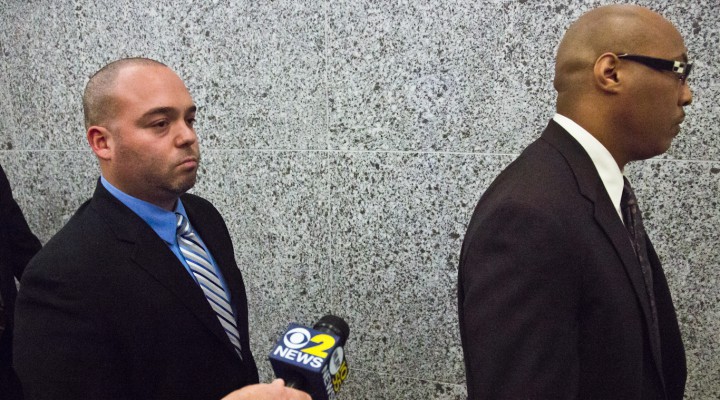 Afanador has a long history of violence and brutality towards those he is charged with protecting and serving, especially to African-Americans.

MPN- Barely a week after the state made the practice a criminal offense, New York Police Department officer David Afanador was caught on camera yesterday choking a black man unconscious. Video of the incident in Queens shows Afanador and other officers apprehending 35-year-old Ricky Bellevue as his companions plead for his safety: “Stop choking him bro… He’s choking him! let him go!” one says. Bellevue was taken to a local hospital after losing consciousness.

What are you going to do?

This is TODAY. 100th Precinct.

New York just made this a crime last week.

Bellevue’s lawyer, Lori Zeno, Executive Director of Queens Defenders, claimed his head had been bloodied and his wrists were swollen. “He was on such a hard chokehold that he couldn’t speak to say he couldn’t breathe,” she said, echoing the final words of George Floyd and Eric Garner, two other black men suffocated by police.

Despite the massive media attention and protest movements they sparked, Garner’s killer was not fired for five years, while it took four days of nationwide insurrection before Derek Chauvin, the Minneapolis officer who killed Floyd, to be arrested. Perhaps fearing a similar uprising, the NYPD immediately announced they were suspending Afanador without pay, the city’s police commissioner Dermot Shea stating that “immediate action was necessary” given how “disturbing” the incident was.

Perhaps more disturbing, however, is Afanador’s long history of violence and brutality towards those he is charged with protecting and serving, especially to African-Americans. In 2014, for example, he faced up to seven years in prison for the brutal assault of a black teenager, in addition to official misconduct and gun possession charges. Video of the incident shows Afanador drawing his weapon on the teen, who had his hands up and using it to smash his teeth in. Afanador and his partner continue to attack him as he is lying dazed on the ground, punching and slapping his face. He and his partner were found innocent of all charges.

Here's a video of him beating up a black kid. He was acquitted. pic.twitter.com/NAqwyb3mIs

The not guilty verdict was delivered by Judge Danny Chen, who, as New York City publication Gothamist reported, reduced the sentence for Peter Liang, the officer who killed African-American man Akai Gurley to probation and sentenced two vigilantes who admitted to beating up a gay black college student so badly it left him blind in one eye, to only community service. As Afanador left the courtroom acquitted, the New York Post noted at the time, he was “surrounded by jubilant fellow cops” celebrating the decision.

In 2008, Afanador was part of a group of officers who were performing a strip search on a man in the street. According to an official complaint, a shocked bystander, Ranique Williams, began to record the event and ask for their names and numbers. The officers immediately assaulted him, punching and slapping him in the head and stealing his phone. They proceeded to handcuff Williams, lifting him off by the cuffs, causing him excessive pain, and continued to punch in the face and assault him while handcuffed. Afanador and his colleagues then started a malicious prosecution against Williams in an attempt to cover for their false arrest and seizures. The City of New York paid Williams $37,500 in a settlement.

A year later, according to another official complaint, Afanador was part of a group of police officers who arrested and brutalized George Smith for no reason, breaking his collarbone and refusing to get him medical treatment, later lying about the incident later to cover themselves.

In 2015, Afanador was allegedly part of a group of three plainclothes officers who illegally entered a Brooklyn house and assaulted an African-American woman. When her sister tried to intervene, they shouted “shut the fuck up you black bitch,” and arrested her too, ransacking the house while putting a gun to their heads. After their brother appeared he was also beaten up. As one of the sisters tried to protest, an officer told her, “I’m sick and tired of you, you fat black bitch,” slamming her head into a wall. She was taken – virtually naked – to the police station. The officers were accused of excessive force, failure to intervene, false arrest, malicious prosecution, municipal liability, unlawful entry, and unlawful stop and search. New York City paid out $70,000 to the victims. A 15-year NYPD veteran, New York’s payroll records show Afanador makes $103,408 – over three times the median U.S. income, according to the census bureau.

While authorities at both a national and state level have moved to ban the dangerous and deadly chokehold Afanador used, it is far from clear whether it will change police behavior. The NYPD had already banned chokeholds in 1993, yet between 2014 (Garner’s killing) and June 2020, the New York City Civilian Complaint Review Board reported 996 allegations from locals saying they had been subjected to one, suggesting police violence like that displayed in the Afanador video is a systemic, not an individual problem. When left to rot, bad apples, the saying goes, spoil the entire bunch.