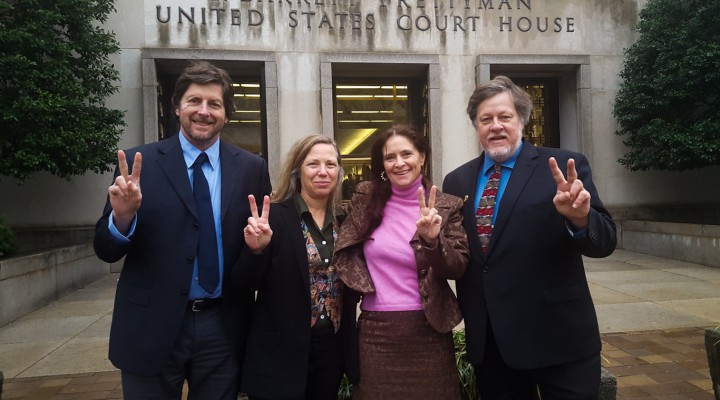 Judge Beryl Howell has declared a mistrial following a hung jury in the case of the four Venezuela Embassy Protectors charged with “interfering with the protective function of the State Department.”

MPN– The word “Kafkaesque” is thrown around liberally in the modern era, often without warrant. “The Trial,” a 1925 novel written by Bohemian writer Franz Kafka, tells the story of Josef K., a man arrested and prosecuted in a nightmarish kangaroo court while unable to properly defend himself. But nearly 100 years later, another real trial took place in our modern American dystopia, one which easily qualifies for the moniker. Starting February 11, four anti-war activists, Adrienne Pine, Kevin Zeese, Margaret Flowers and David Paul, were facing a year in prison and a $100,000 fine each for interfering with the protective function of the State Department. Today, despite a hostile judge and a host of constraints against the defense, prosecutors were unable to convince a jury that any crime had been committed and the events ended in a mistrial.

The four are members of the Washington D.C. Venezuelan Embassy Protection Collective, a group that last year, at the behest of the government of Nicolas Maduro, entered and occupied the Venezuelan embassy for over a month. In 2019, the Trump administration sponsored a series of coups against the democratically elected Maduro, bizarrely announcing the virtually unknown politician Juan Guaidó as the legitimate president of the country. Each coup was less successful than the last, and Maduro remains in complete control of the country, while Guaidó has become an overwhelmingly unpopular figure, jeered and assaulted wherever he goes.

On the news of the mistrial verdict, Howie Hawkins, 2020 Green Party presidential nominee, said “I am grateful for the resolve of the jurors who held out and caused today’s hung jury…It shows that the overreach in foreign policy of the Trump Administration is not popular among the American public.” Flowers and Zeese are members of the Maryland Green Party. “We stand with Greens and other progressives everywhere, who are proud of the actions that Flowers, Zeese and the others, in favor of peace and the self-determination of autonomous nations,” stated Hawkins. “This shows that Greens are willing to do whatever is necessary to stand up for justice.”

What made the trial particularly Kafkaesque is that the four were not allowed to defend themselves by arguing Maduro is indeed the legitimate leader of the country, Judge Beryl Howell having asserted that President Trump’s word on Venezuela is literally law. The United States instructed Venezuelan diplomats to leave the country last April, prompting the government’s request for activists to occupy the building. Howell also decreed that it was illegal for the defendants to tell the jury that Trump violated international law by raiding the embassy or to question Guaidó’s legitimacy at all. Under the circumstances, the four decided to present no defense whatsoever. Despite the drawbacks, prosecutors could not force through a guilty verdict and the trial ended in a hung jury.

MintPress News spoke with the four activists. Dr. Pine, an anthropologist at the American University in Washington, D.C., explained why she decided to prevent the U.S. from violating Venezuelan sovereignty:

We entered the embassy at different moments, but all of us shared the goal of protecting it from a U.S.-led coup, and helping to ensure with our presence that a peaceful resolution could be achieved through the negotiation of a Protecting Powers agreement – negotiations that were underway during our residence in the embassy between the democratically elected government of Venezuela and the Trump administration. That is why we were all very clear that our role there was temporary.”

At the height of the tensions in April, there were more than 70 people defending the embassy from Juan Guaidó’s American associates. Protectors were subject to sound cannons and mobs of angry, pro-coup Venezuelans. Eventually, the government also shut off their power and water.

Kevin Zeese, a lawyer and co-director of Popular Resistance, an alternative news outlet, explained why he refused to leave and had to be removed in handcuffs:

The trespass notice that resulted in our arrest was issued because Carlos Vecchio, a fake ambassador working with Juan Guaidó, ordered us to be evicted. When we got that notice, it was unsigned; there was no state or government agency; nothing official on it. But Carlos Vecchio’s name was on it saying we were trespassing. We knew he did not have any position in government and was not really an ambassador. And we knew we were not trespassing because we had the permission to be in the embassy given to us by the foreign minister and the Maduro government. So we did not see that as a valid order and we stayed there.”

Pine told us that she and her co-defendants always rejected the validity of the trial and court altogether. “We did nothing whatsoever to interfere. Their case was riddled with flat-out lies,” she said. Both Zeese and Pine have contributed to MintPress News in the past. Alex Rubenstein, a journalist who covered the case in close detail for MintPress last year, spending time inside the embassy told us that, in his opinion, the U.S. had violated the Vienna Treaty, one of the foundations of international diplomacy, saying:

The United States demonstrated total disregard for the rule of law, all in an effort to further its phony coup against yet another country that has nationalized major sectors of its economy for the benefit of its people instead of big multinational corporations.”

Voices from Inside the Besieged Venezuelan Embassy

Covering the trial from inside the courtroom, The GrayZone’s Max Blumenthal expressed his dismay at Judge Howell who “appeared unable or unwilling to appreciate the distinction between the U.S.-recognized doofus,” Juan Guaidó, “who controls zero government functions, and the U.N.-recognized Venezuelan government that governs the country both in practice and in law.” He also reported that during jury selection, one potential juror falsely claimed that Venezuela had run two separate elections – one supervised by Russia and one by the U.S. He said he learned that by reading the Washington Post. Therefore, Blumenthal worried, it would not just be the judge that was substandard.

When the jury originally told the judge that they were unable to reach a verdict she directed them to continue deliberating instead of immediately calling a mistrial. Howell has called for a retrial, according to Sputnik News, but it is not clear if or when it will occur.

The judge, Beryl Howell, has stacked the deck against the defendants, preventing the jury from hearing any argument asserting that Maduro is the president of Venezuela, or even that he resides in Miraflores Palace. She asserted that the US president determines who’s prez of VZLA.

Blumenthal himself is not a neutral actor but also spent time inside the embassy, and was arrested in a SWAT-style raid in October by armed police who had been warned he was potentially armed and dangerous. He sees the incident as an attempt to silence and intimidate critical media.

If the trial itself was Kafkaesque, the media coverage (or complete lack thereof) is far more Orwellian. In the book “Nineteen-Eighty-Four,” George Orwell describes a world of groupthink, where the entire political class can change its collective opinion on a dime, consigning unwelcome facts down the memory hole. Trump’s Ministry of Truth has decreed Guaidó to be president, and that is final.

As of Friday afternoon, there has been complete silence across the corporate media spectrum with regards to the trial, with nothing in CNN, the New York Times, Fox News or MSNBC, who collectively employ hundreds of reporters in the D.C. area. A search in Google News’ database finds a few scattered articles in small, alternative outlets like AntiWar.com, Sputnik, and Venezuelanalysis – not coincidentally all sites that have been labeled as spreaders of fake news by the same establishment that has collectively decided to ignore the trial. The sinister thing about censorship in democracies, Orwell wrote, is that it is largely voluntary, so people don’t realize they are under it.

Why were the four charged with entering the embassy at the request of the Maduro administration? For Rubenstein, the goal was obvious:

It was to send a clear message to any American citizen who may take up the noble cause of upholding international law or who may be inclined to take a stand against the United States’ long and ugly history of fomenting coup d’états in service of oil or other natural resource interests.”

Nicolas Maduro won reelection in May 2018 in a process declared free and fair by hundreds of international observers, but a sham by the U.S. government and Western media. Some sectors of the Venezuelan opposition refused to accept the result, and in January 2019, Guaidó, a theretofore little-known politician, declared himself president, despite never having stood for the position. Throughout 2019, he called on the military to rebel and overthrow Maduro. Despite being supported financially and politically by the U.S. government, each coup attempt failed, and left him in a weaker position than before. His last coup attempt in November went so poorly that few inside the country even noticed. Nevertheless, the Trump administration has continued to hold him up as the legitimate president of the country, even as his approval ratings dip below 10 percent. While the United States and dozens of its allies recognize him, the United Nations and three-quarters of the world’s countries continue to acknowledge Maduro’s legitimacy. Guaidó’s mentor Leopoldo Lopez told journalists that if they successfully capture power, they will call on the United States to formally govern the country.

The principal motive behind the U.S. government’s opposition to Venezuela is that it has consistently voted for socialist candidates since the days of Hugo Chavez (in office 1999-2013). Chavez revolutionized the country, reducing poverty by half and extreme poverty by three-quarters, creating a nationalized healthcare system, ridding the country of illiteracy and drastically improving economic inequality and the standard of living. Since 2015 the United States has been in an official national emergency over the supposed imminent threat Venezuela represents, imposing rounds of increasingly tough sanctions that have helped wreck the once-booming economy. The sanctions, declared a “crime against humanity” by an American U.N. Special Rapporteur who visited the country, are estimated to have killed at least 40,000 people between 2018 and 2019 alone. The U.N. has called on all member states to break them.

The punitive nature of the sanctions matches the treatment of the Embassy Protection Collective. Pine told MintPress:

We were prosecuted because the Trump administration wants to set an example to terrify others who might consider putting their bodies on the line to protest U.S.-led coups, counterinsurgency programs, unilateral coercive measures, and other imperialist wars and policies, and to stand in solidarity with peoples and nations wishing to forge their own path without U.S. interference around the world.”

Voices from Inside the Besieged Venezuelan Embassy