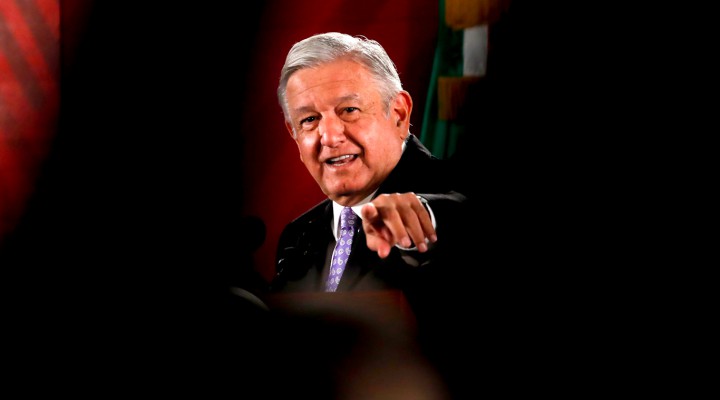 Everybody in Latin America knows what happens to leftist heads of state who challenge the power of the local elites and of the US government.

President Donald Trump announced that he will designate Mexican drug cartels as “terrorists”, paving the way for a potentially massive increase in American military involvement directly south of its border. “They will be designated,” Trump told ex-Fox News anchor Bill O’Reilly during an interview, revealing that he asked the Mexican government for permission to put soldiers on the ground: “let us go in and clean it out,” Trump said, revealing that they have “so far has rejected the offer. But at some point, something has to be done.”

Mexico’s left-wing president, Andres Manuel Lopez Obrador, commonly referred to by his initials, AMLO, hit back Friday, insisting that his country had not been invaded for more than a century and that he would not permit an invasion under his watch, revealing exactly how he understood Trump’s offer.

The United States has increased its intervention in the domestic affairs of Latin American countries of late, supporting a coup that last month overthrew AMLO’s Bolivian counterpart Evo Morales. An official White House statement noted that Morales’ ouster constitutes a “significant moment for democracy in the Western Hemisphere,” claiming that “after nearly 14 years and his recent attempt to override the Bolivian constitution and the will of the people” the coup means “We are now one step closer to a completely democratic, prosperous, and free Western Hemisphere.”

The statement specifically mentioned Venezuela and Nicaragua as the next targets of U.S. regime change, and Trump’s former Special Advisor on Latin America, John Bolton, described the countries as belonging to a “troika of tyranny.” This brazen policy of overthrowing democratically-elected left-wing administrations has been dubbed Operation Condor 2.0 by The Grayzone’s Ben Norton.

AMLO has been in office since December 1, 2018, and is Mexico’s first left-of-center president in decades. He came to power in a landslide, promising to end the “disastrous” 36-year neoliberal experiment in his country and oppose “the small minority that has profited of its influence.” He has enacted a number of cost-cutting measures, including selling off a presidential plane and reducing his own salary. He has used some of this money to fund infrastructure projects like building railroads and to give direct cash transfers to the poor.

Inequality has fallen, but the country continues to be plagued by drug-related violence. His approval ratings are among the highest of any head of state in the world. He bypasses the traditional, conservative media by putting out a daily conference at 7 a.m. where he speaks directly to the nation. He also immediately sent a jet to rescue Morales after his downfall, offering him asylum in Mexico City. AMLO is very open about the possibility of his own impending death, discussing it on Twitter last month. He argued that the hawks who dream of overthrowing him have not taken into account his large social base who will protect him and “not allow another coup d’état.

The U.S. government has used the terrorist designation in Latin America before to justify an increased military presence. Overnight Colombian narco-traffickers became “narco-terrorists,” as the Bush administration used the extant war on terror legislation to push through an expanded military role in supporting the local government which was waging war on its own population, a program called “Plan Colombia.”

The “resistance” media stands by Trump

Fox News immediately demanded American boots on the ground. “We’ve done it before in Colombia…the president’s got to force his way in there,” one host said, after dismissing AMLO’s refusal.

Perhaps most ominously, the “resistance” media that nominally opposes Trump on domestic issues but stands shoulder-to-shoulder with him on international policy, has begun quietly sowing the seeds for regime change in Mexico.

Last week the Washington Post wrote that AMLO is “consolidating power” and “threatening some of Mexico’s hard-won democratic gains,” claiming that he is “weakening institutions that safeguard human rights and clean elections and is exerting more control” over the country. It also presents his daily news conference as a threat to “independent” (i.e. corporate) media that are critical of him. The language used is distinctly similar to that used by the White House’s in justifying its support for the coup in Bolivia, and to that which the Post has used to call for a coup in Venezuela.

Last month, its editorial board welcomed the Bolivian military deposing Morales, claiming that he has “grown increasingly autocratic,” arguing that he personally controlled the country’s democratic institutions. In 2017, it published an article entitled “The odds of a military coup in Venezuela are going up. But coups can sometimes lead to democracy,” suggesting the country’s military should intervene to overthrow the leftist government of Nicolas Maduro.

If the Trump administration is serious and attempts to unseat AMLO, do not expect the media to resist it. Democracy won’t die in darkness in Mexico; it will die to the sound of cheering from the Washington Post editorial board.