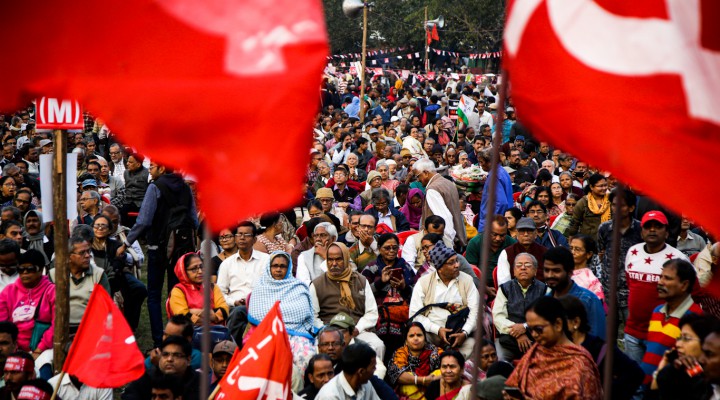 India’s government is cracking down, imposing martial-law like conditions amid massive protests against the government’s not-so-slow creep towards becoming a full-fledged Hindu supremacist state.

MPN- The protests against the discriminatory Citizenship Amendment Act (CAA) and National Registration Council (NRC) laws continue across India. In response, the government of Narendra Modi has placed the capital Delhi under the National Security Act (NSA); legislation that allows any Indian to be detained for up to a year without charge or access to legal representation.

Late Friday night Delhi’s Lieutenant Governor Anil Baijal granted the power of preventative detention to the city’s police as the government has failed to neutralize widespread resistance to its controversial new decrees. The protests started on December 4 and have since spread to every state in India. The response has been considerable. The government has not released nationwide figures but 23 have been people killed and over 5,500 detained as of December 25 in Uttar Pradesh alone, a state bordering Delhi, home to India’s largest Muslim population.

Million People at this time at #ShaheenBagh

The CAA allows for immigrants from neighboring Muslim-majority countries to achieve Indian citizenship more easily – if they are Hindu, Christian, Buddhist, Sikh or Jain. But it explicitly prohibits Muslim, transgender, atheist and lower-caste immigrants from doing the same thing. It, therefore, constitutes a sharp reversal of the country’s tradition of secular republicanism.

Meanwhile, the NRC is a newly established body that determines Indian citizenship. It can demand of any Indian that they provide extensive documentation of their ancestors’ birthplaces – something most of India’s 1.3 billion inhabitants will likely be unable to do. As a consequence, Modi and his ruling Bharatiya Janata Party (BJP) now have the ability to question and strip the citizenship (and therefore human rights) of large numbers of people at a time, making them stateless.

The NRC has already been used in the state of Assam, where nearly two million people – half of them Muslim – have had their citizenship revoked. Many of the newly criminalized “illegal immigrants” will be housed in huge detention centers resembling those on the U.S.-Mexico border.

Despite the potential for serious consequences from the capital’s police, Delhi women have led a spontaneous 24/7 protest – called the Shaheen Bagh – for 37 continuous days. Many have traveled from all over the country to set up shop at the encampment in southeastern Delhi. Similar occupations have popped up in other cities. With the new NSA decree, police will be empowered to take far more forceful action against protestors if they so desire.

The protests have become a popular place for artists and musicians, as young people join the revolt; while Muslims are particularly prevalent, people from all faiths have joined. There are also vigils outside Delhi’s Jama Masjid, the largest mosque in the city. On Saturday, the anniversary of statesman Mahatma Gandhi’s final hunger strike, a large crowd gathered outside the mosque pledging to uphold the secular constitution and protect the Muslim community from further attacks from the government. Gandhi ended his final hunger fast on January 18, 1948, after Hindu extremist groups such as the Rashtriya Swayamsevak Sangh (RSS) – a group Prime Minister Modi is a member of – agreed to end their campaign of communal violence against Muslims. Hindu extremists assassinated Gandhi later that month. Protestors claim that Modi’s new laws “shatter the promises made in that declaration.” “For Gandhi, India belonged to all. He would have found the idea of linking citizenship to religion abhorrent,” they argue.

The Shaheen Bagh has become a metaphor for the resistance against Modi’s attempts to move India away from its secular tradition into a Hindu supremacist state. As one writer put it, “It’s not just about saving Indian Muslims. It’s about saving India.” There is, however, strong support for the BJP’s policies among India’s Hindu community, who constitute over 80 percent of the country’s population. Modi became Prime Minister in 2014 after the collapse in support for the once-dominant Congress Party. And in the April-May elections last year the BJP swept the country, winning 303 of the 545 seats in the Lok Sabha, India’s lower house of parliament, a remarkable achievement in a federated, multi-party subcontinent where nearly forty parties won seats. Modi is also widely seen, both positively and negatively, as the man who oversaw the 2002 Gujarat riots, where over a thousand Muslims were slaughtered in communal violence reminiscent of Gandhi’s era.

In December, Indian intellectual Vijay Prashad described Modi’s ideology as a mixture of fascism and hard neoliberal economics, combining Hindu nationalism with a package of privatization of state resources. Despite substantial economic growth, India’s working class has seen little to no rise in standards of living in decades, leading to rapidly expanding economic inequality. Without an explanation from the moderate National Congress Party, who began implementing the privatization process, the BJP has been able to successfully focus the Hindu majority’s discontent onto ethnic minorities and immigrants, particularly Muslims, even as they carry out largely the same economic agenda as Congress did.

Earlier this month, an estimated quarter-billion Indians went on strike demanding better wages and working conditions. While the Modi government may have the seats in parliament to push through any legislation it wants, it does not mean that those opposed to it will take his plans lightly.