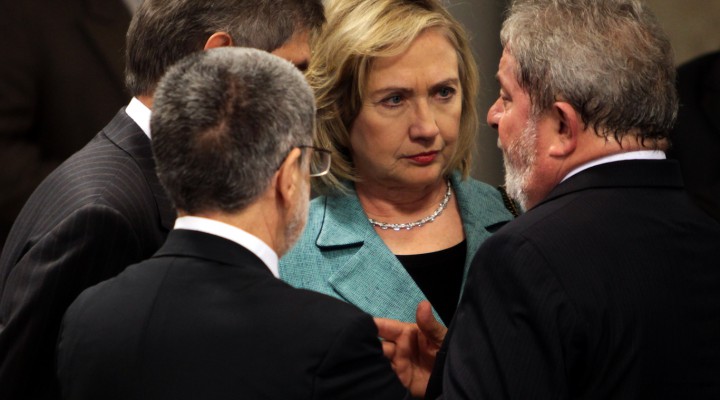 MPN– He was the world’s most popular leader. Now he is “the world’s most prominent political prisoner” according to American political philosopher Noam Chomsky. From extremely humble beginnings as a peanut seller and a shoeshine boy on Brazil’s streets, Luiz Inacio Lula da Silva rose to become president of his nation in 2002. Yet he is now being kept hostage by the country’s fascist Bolsonaro administration. In a wide-ranging interview with Brasil Wire editors Daniel Hunt, Brian Mier and Michael Brooks, host of The Michael Brooks Show, the man universally known as Lula described how the U.S. government ordered him not to negotiate a nuclear deal with Iran, new revelations about U.S. involvement in the coup of 1964, and the current state of his country.

U.S. tensions with Iran are nearing an all-time high. But ten years ago, the Brazilian government brokered a deal between Iran and the West – something, Lula reveals, was met with near incandescent anger by Barack Obama and Hillary Clinton. The former president was at the G20 summit in Princeton, N.J., and talk of negotiating a peace deal with Iran was in the air. But, as he soon found out, none of the leaders in the room were interested in speaking with Iranian president Mahmoud Ahmadinejad. “How do these people want to make a deal without a conversation?” Lula asked, proposing to travel alone in good faith to Iran as a neutral arbiter from the global South. The U.S. tried to scupper his plan at every step. As Lula recounted,

The reason Obama did not want him negotiating, it transpired, was that he had already written and signed a formal letter to Lula promising that if Iran agreed to certain terms, the U.S. would sign a treaty. Lula went to Tehran regardless of the objections and had little trouble signing Ahmadinejad up to terms dictated by Obama. He naively thought the U.S. and the E.U. would celebrate his diplomacy. In fact, Lula said, he was treated as a “personna non grata on the international political stage.” “Everyone was acting like Brazil had gotten into something that nobody had invited it to do,” he added.

In response to Brazil’s efforts at diplomacy, Obama increased sanctions on Iran, shattering the pretense that the U.S. was acting as an honest partner and just wanted to secure peace in the region. Nevertheless, his actions, calling the West’s bluff, eventually led to an Iran deal that made the region a safer place. “The rich countries… did not accept a new protagonist in the area. In their minds, Brazil was not big enough to get involved in an issue of that scale. It was easy for me to speak with Ahmadinejad because I told him that the only thing I wanted from them is what we have in Brazil,” Lula told his interviewers.

Brazil had been a loyal client state of the U.S. since the 1964 coup that overthrew João Goulart and replaced him with a fascist military dictatorship. In 2018, Lula notes, evidence was released revealing the extent of U.S. involvement in the coup. Audiotapes showed that President Kennedy personally gave the orders to overthrow Goulart and that U.S. warships entered Brazilian waters to assist the military takeover. “It took us 54 years to learn that,” opined the former president.

As leader of South America’s largest country, Lula reasserted Brazil’s independence internationally. “I am convinced that the Americans never accepted the fact that we made a deal with France to build nuclear powered ships,” he said. “Comrade Obama was not happy when we decided to make a deal to buy [French] Rafale jets, and that [my successor] Dilma decided to buy Swedish fighter jets. He wasn’t happy with that. He also wasn’t happy with a certain level of independence that Brazil had.”

According to Lula, the U.S. was aghast at the wave of countries electing left-wing heads of state across the region. By 2011, a large majority of Latin Americans lived under governments formally committed to ending the reign of American imperialism, from the more radical leftist governments of Venezuela, Bolivia and Ecuador to the “soft left” of Argentina, Uruguay or Brazil. All the governments differed in outlook but all saw the necessity in working together to achieve genuine independence. Barack Obama walks past Lula da Silva after speaking at the Summit of the Americas in Port of Spain, Trinidad and Tobago, April 17, 2009. Andres Leighton | AP

They also began inviting other powers like Russia and China in. “I think the Americans woke up one morning and said, “hold on a second, Latin America is ours and we will not allow the Chinese to continue acquiring Latin America,” Lula said. However, the situation is very different in 2020.

Lula’s successor Dilma Rousseff was impeached and Lula imprisoned and barred from standing for office. Others, such as Bolivia’s Evo Morales have been overthrown in U.S. sponsored coups. The U.S. has also recognized right-wing opposition politician Juan Guaidó as president of Venezuela. Lula took aim at the “rude” and “mediocre” “foolishness” of the Trump administration: “The idea that you would officially recognize a con-artist, a congressman who declared himself President of the Republic – imagine if this fad catches on around the World!”

Today, Brazil is again controlled by a fascist military officer in Jair Bolsonaro. Lula was convicted of corruption in a highly dubious court decision, sent to prison, and barred from standing in the 2018 elections, where polls show he was the overwhelming favorite for victory. After jailing him, the judge, Sergio Moro, accepted a place as the Minister of Justice in Bolsonaro’s cabinet. Even more shockingly, Brazil-based American journalist Glenn Greenwald exposed that Moro was far from a neutral arbiter and was in fact collaborating with the prosecution team to ensure Lula’s conviction. As MintPress News reported this week, Greenwald has now been charged with “cybercrimes” in retaliation.

“I think that Brazil is living its worst moment in history,” Lula told his interviewers. “We have a subservient government.” Subservient, that is, to the United States and to capitalism. He was kept in solitary confinement, and without access to reading materials, but has been temporarily freed while his appeal is heard, hence his increased ability to speak out.

Lula grew up dirt poor in Brazil’s extremely impoverished northeast, dropping out of school by grade five to shine shoes for a living. He was a child laborer and lost a finger at age 14 in a lathing accident in an auto parts factory. But he had already begun to organize his much older colleagues, rising to become one of the country’s top union bosses, a dangerous position to hold in a fascist dictatorship. After many years of trying, he was elected president of Brazil in 2002. As the U.S. was declaring war on Iraq, Lula was declaring a war on hunger in his own country. His signature Bolsa Familia program, which featured both unconditional and conditional direct cash transfers to the poorest Brazilians, lifted tens of millions out of poverty. Under Lula and Dilma, the education budget rose fivefold while health spending quadrupled as the country constructed an enormous socialized health system with the help of around 12,000 Cuban doctors.

It was independent, constructive thinking like this that generated such respect for Lula worldwide and the reason he is still seen as a dangerous subversive by elites both in Brazil and in the United States. The threat of a good example, after all, is a powerful one.