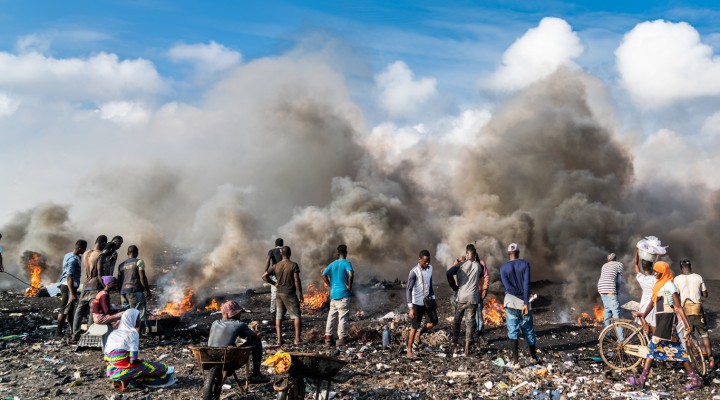 Last year, at least 30 rich countries exported locally-banned toxic substances to poorer ones, allowing corporations to write off their costly waste and transferring the costs to some of the poorest people on earth.

MPN– The practice of dumping banned, toxic chemical waste on poorer societies by big corporations in rich countries must end, say experts at the United Nations Human Rights Council. “In nearly every case there is no legitimate public interest justification,” said Baskut Tuncak, a Turkish-American UN special rapporteur on the environment and the disposal of toxic waste. “These loopholes are a political concession to industry, allowing their chemical manufacturers to profit from inevitably poisoned workers and communities abroad, all the while importing cheaper products through global supply chains and fueling unsustainable consumption and production patterns. It is long-overdue that States stop this exploitation.”

While stricter regulations apply regarding dumping in regions like Europe and North America, they are often virtually non-existent in African, Asian or Latin American countries. Last year, at least 30 rich countries exported locally-banned toxic substances to poorer states, primarily to save money and resources, allowing corporations to write off their costly waste as an externality, transferring the costs on to some of the poorest people on earth. “The ability to manufacture and export toxic substances banned from use domestically is one, albeit large, element of how states have institutionalized externalities through discriminatory national laws and an outdated system of global governance for chemicals and wastes,” added Tuncak.

The Agbogbloshie dump in Ghana is a prime example of the relationship between rich and poor nations. 10,000 workers shift through millions of tons of Western electronic waste that pollutes the air, land and water for miles around, burning plastics and melting metals, hoping to find small amounts of valuable minerals, drastically reducing their own life expectancies. “When I was a small boy, I used to be a footballer — but not anymore,” said 28-year-old Abdullah Boubacar, who makes a living burning plastic insulation off wires to salvage copper. “[Now] I have stomach ulcers and I run out of energy very easily.”

There are usually far fewer regulations against harmful substances in poorer countries, often because their governments have been deposed by Western ones, with institutions like the World Bank imposing extreme forms of neoliberalism governance on them, forcing them to deregulate and privatize their economies. The U.S. government made glue manufacturer H.B. Fuller remove a dangerous and addictive additive in one of its adhesives. However, the company continued to sell the same product across Latin America, despite knowing that tens of millions of children were sniffing it to alleviate pain or hunger, leading to terrible health consequences, including death.

When multinational corporations pollute in rich countries, governments have the power to stand up to and punish them. But this is usually not the case with poorer states in the global south. After the Deepwater Horizon oil spill, the Department of Justice imposed a fine of over $4.5 billion on petrochemical giant BP. Yet when Ecuador attempted to punish Chevron-Texaco for the massive destruction of its Amazon jungle — spilling 80 times the amount of oil BP dumped in the Gulf of Mexico, they simply refused to pay. Furthermore, Chevron-Texaco has managed to get a New York court to prosecute Steven Donziger, the lawyer representing over 30,000 poisoned Ecuadorians. Since then he has had his accounts frozen and has been under house arrest for successfully standing up to the corporation. The court’s decision was condemned by 29 Nobel laureates.

The UN position strongly clashes with that of the World Bank. In 1991, the Bank’s Chief Economist, Larry Summers, argued that his organization should be “encouraging more migration” of pollution to the poorest countries. “I’ve always thought that under-populated countries in Africa are vastly UNDER-polluted,” he wrote, adding that, in his opinion, “the economic logic behind dumping a load of toxic waste in the lowest wage country is impeccable and we should face up to that.” Summers also bemoaned the fact that the United States and Europe could not export their transport emissions. Summers is now a key advisor to Democratic presidential candidate Joe Biden. Activist groups such as Greenpeace and the Working Families Party are attempting to convince Biden to remove him from his position, citing his abysmal record on economics, the environment, and on gender.

On the issue of toxic dumping, some progress is being made. France recently prohibited the export of domestically-produced toxic chemicals, while 25 African countries made it illegal to export to them any substances forbidden from use in their country of manufacture. These laws, however, should not be necessary, according to the experts, who noted that exporting banned chemicals is already illegal under international law. “Failing to address this longstanding exploitation is discrimination, pure and simple,” they concluded.