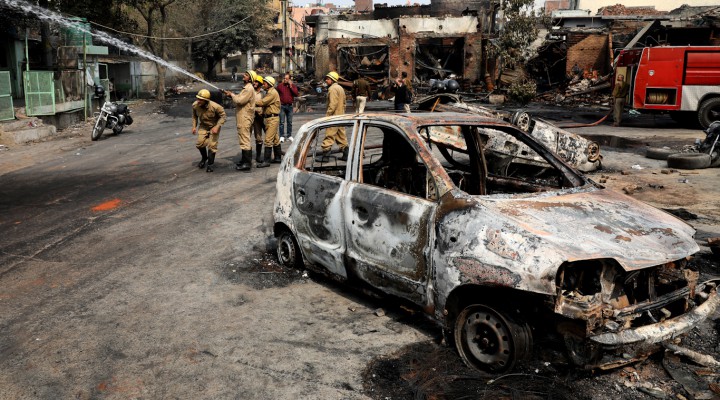 MPN– Much of India’s capital Delhi resembles a warzone, as huge communal riots targeting the city’s Muslim population engulfed it today. Mosques were set ablaze, with at least 27 people killed and hundreds more taken to hospital with severe injuries. The violence is continuing into the night, particularly in the city’s northeastern neighborhoods. Gangs of Hindu mobs and paramilitaries roam the city, attacking those protesting against Prime Minister Narendra Modi’s anti-Muslim Citizenship Amendment Act (CAA) and National Registration Council (NRC) laws. Extensive damage has been done to many neighborhoods, as homes, businesses, places of worship and vehicles have been burned.

The city – by some estimates the world’s second largest urban area – has been under martial law for over a month, but that has not stopped protests and counter-demonstrations growing. Journalists from The Wire interviewed some of those responsible for the destruction of mosques:

“Our opposition is to the opposition of those against the CAA. How dare they [Muslims] protest like this in our country? Is it their country? It is our country. Are they bigger goons than us? We are the bigger goons. We will show them their place, not allowing them to remain (even) in their homes. Houses have been burnt, a hospital too,” they were told.

Images on social media have shown Muslims leaving their houses with their belongings in hand, fearful of increased hostilities.

#Watch | NDTV reporters share how they were assaulted by armed mobs in violence in N-E Delhi today.#DelhiViolence #Delhi #DelhiCAAClashes

Journalists have also been a target of violence. NDTV’s Arvind Gunasekar and Saurabh Shukla were beaten up and threatened with death if they did not delete images they had captured while covering the riots. They were only released after they proved they were both Hindus. Gunasekar alleges Delhi’s police are working shoulder-to-shoulder with the “mobs.” Video also appears to show a gunman near police firing at a crowd of demonstrators, with the police doing little to intervene. Police have also been filmed beating unarmed protestors, forcing them to sing the national anthem

The police are under the control of newly re-elected Chief Minister of the city, Arvind Kejriwal of the Aam Aadmi Party, an opponent of the Modi government. Yet during the elections, Kejriwal took pains to present himself as a deeply religious Hindu and to distance himself from being seen as a pro-Muslim candidate. He told reporters that he was unable to rein in the violence due to a “severe shortage” of police officers. But given Gunasekar’s accusations, it is unclear whether more police would dampen or further inflame tensions.

Serious tensions began in December when ongoing, occupy-style protests sprang up in the south east of the city in response to the Modi government’s CAA and NRC laws. The CAA allows immigrants from India’s Muslim neighbors to achieve citizenship much more easily – if they are Hindu, Christian, Sikh or Jain, but explicitly rejects Muslims from doing the same thing. The NRC is a newly established body that can demand of any Indian that they provide extensive documentation of their ancestors’ birthplaces – something most of India’s 1.3 billion inhabitants will likely be unable to do. As a consequence, the government now has the ability to question and strip the citizenship (and therefore human rights) of large numbers of people at a time, effectively making them stateless.

The NRC is already in effect in the northeastern state of Assam, where 1.9 million people, most of the Muslims, have been declared illegal aliens. The government is building a network of huge detention centers, not unlike ICE facilities on the U.S.-Mexico border, to house the population. Last week Giriraj Singh, a minister in Modi’s cabinet, expressed his regret that India did not fully rid itself of its Muslim population upon its creation as an independent state in 1947 and called for a cap on the number of children India’s 138 million Muslims could have.

President Trump visited the country this week, where he spoke of his warm affection for the Prime Minister. When questioned about the violence, he responded that Modi was “working very hard on religious freedom.” Modi positions himself as part of the same wave of right-wing populist leaders as Trump, Jair Bolsonaro in Brazil and Viktor Orban of Hungary. He has officially called for an end to the fighting: “Peace and harmony are central to our ethos. I appeal to my sisters and brothers of Delhi to maintain peace and brotherhood at all times,” he wrote. Yet he was elected on an explicitly Hindu supremacist message, and, as chief minister of Gujarat in 2002, oversaw the massive wave of Islamophobic violence that led to over 2,000 deaths and 200,000 Muslims being driven from their homes. For much of the majority Hindu population, this is a point in his favor; he and his BJP party won a landslide re-election last year.

A Muslim man was identified and beaten up by a mob of RSS sponsored members. No policemen around to prevent this. This is not a riot, this is a repeat of what happened in 1984 with sikhs. This is what ‘kapdo se pehchano’ can do.#Chandbagh #ArrestKapilMishra pic.twitter.com/bgjmfw1G0q

Modi was also a member of the Rashtriya Swayamsevak Sangh (RSS), a far-right Hindu paramilitary with over 5 million active duty members. Indian intellectual Vijay Prashad described his ideology as a mix of Indian-style fascism and orthodox neoliberal economics, combining Hindu chauvinism with the privatization of state resources. Last month, a quarter-billion people went on strike against Modi’s economic policies, demanding comprehensive new legislation to improve worker rights and pay across the country.

While unwilling to implement populist economic measures, Modi has been able to channel the anger and resentment of the country’s Hindu majority towards its Muslim population, opening up old wounds across the giant country. It is unlikely that the violence will end tonight.