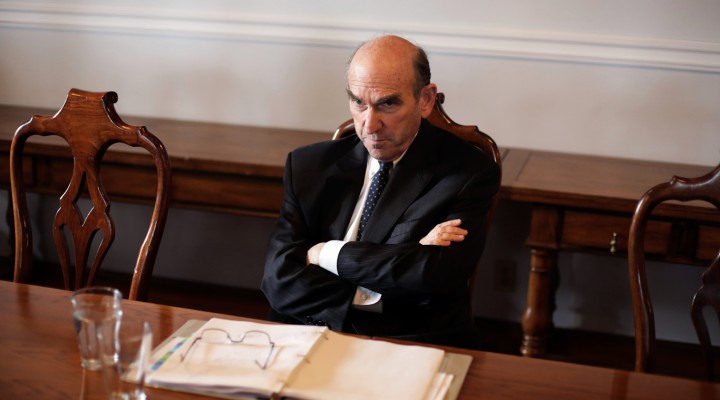 Activists, the UN, and even mainstream news outlets expressed dismay at the Trump administration’s decision to appoint regime-change champion Elliot Abrahams to the role of Special Representative for Iran.

MPN– The Trump administration has appointed disgraced neoconservative hawk Elliott Abrams to the new position of chief advisor on Iran after former insider Brian Hook handed in his resignation earlier this week. “Special Representative Hook has been my point person on Iran for over two years and he has achieved historic results countering the Iranian regime,” said Secretary of State Mike Pompeo yesterday, “Following a transition period with Brian Hook, Elliott Abrams will assume the position of Special Representative for Iran, in addition to his responsibilities as Special Representative for Venezuela.”

Anger and disbelief appeared to be the chief emotions stirred by the decision. “Elliott Abrams appointment as Special Representative for Iran is as ludicrous as his failed career as Venezuela envoy,” reacted United Nations Special Rapporteur Alfred de Zayas. “Convicted war criminal Elliott Abrams gets to try and destroy Venezuela and Iran at the same time. He certainly does have a great track record in dealing with Iran and Latin America all at once,” wrote journalist Anya Parampil, referencing his participation in the Iran-Contra scandal. Activist group CODEPINK was equally condemnatory, claiming the appointment was “another low point for the Trump administration’s disastrous policy towards Iran.” “The dangerous conflict resulting from Trump’s withdrawal from the nuclear agreement will be exacerbated by a man committed to Washington’s failed policies of regime change, including in his present-day position as Trump’s representative for Venezuela,” they added. Even mainstream, corporate-funded outlets could not hide their skepticism at the decision. “Elliott Abrams, convicted of lying about Iran-Contra, named special representative for Iran,” read CBS News’ headline.

Abrams’ first day on the job in the Reagan administration as Assistant Secretary of State for Human Rights and Humanitarian Affairs could hardly have been more conspicuous. The previous day, a U.S.-backed and trained death squad in El Salvador had conducted a massacre in the village of El Mozote, killing at least 800 people and raping girls as young as 10. Survivors testify that the soldiers threw a three-year-old boy in the air and impaled him on their bayonets. Abrams immediately led a cover-up, telling the Senate that eyewitness reports were “not credible” and the massacre was being “significantly misused as propaganda against their side. In total, around 75,000 people were killed in what is misleadingly described as a “civil war,” but was, in reality, a campaign of extermination directed at anyone who dissented against the U.S.-backed dictatorship. Abrams lauded what happened in El Salvador as a “fabulous achievement” for democracy. Investigative journalist Jon Schwarz described Abrams as “supporting Latin American democracy pretty much like [serial killer] Jeffrey Dahmer supported all the people that he brought to his apartment.” Throughout the 1980s, Abrams was a chief architect of the genocides and dirty wars plaguing the region. In Guatemala, he pushed for arms sales to the dictatorship of General Efrain Rios Montt, claiming he had “brought considerable progress” to human rights in the region. “We think that kind of progress needs to be rewarded and encouraged,” he said. While General Rios Montt was later convicted of genocide and crimes against humanity, Abrams faced no consequences for his role in the killing over 200,000 people, nor did he suffer serious repercussions for his role in the Iran-Contra Affair, where government organizations sold weapons to Iran in order to fund far-right death squads in Nicaragua. Abrams pled guilty to lying to Congress about the affair but was quickly pardoned by George H.W. Bush.

“The failure of Trump’s obscure government hawk character, Elliott Abrams, was evident in the U.S. Senate today. His criminal record and his arrogant vision of the Cold War has caused him to crush the dignity and courage of a free people time and again,” wrote Venezuelan President Nicolas Maduro, on hearing the news about Abrams’ new position. Since January 2019, Abrams has been tasked with overthrowing the Venezuelan government, constantly encouraging the country to rise up, and placing crippling sanctions on others who trade with the Caribbean nation. Yesterday, he confirmed that he has been attempting to bribe military generals to rebel and overthrow the country’s elected leader.

he appointment of perhaps the most hardline neoconservative hawk to the new position of Special Representative for Iran is the latest in a long line of escalatory measures the Trump administration has taken. In the last two years, the president has abandoned the nuclear deal, greatly increased sanctions on the country, supported anti-government protests in Tehran, assassinated Iranian General Qassem Soleimani, and prevented the importation of COVID-19 medicines and supplies. Given his record, it is doubtful whether many in Iran will be celebrating the return of Elliott Abrams.

Feature photo | Elliot Abrams, the U.S. special adviser for Venezuela and now Iran, listens to questions from reporters at the US embassy in Lisbon, April 9, 2019. Armando Franca | AP