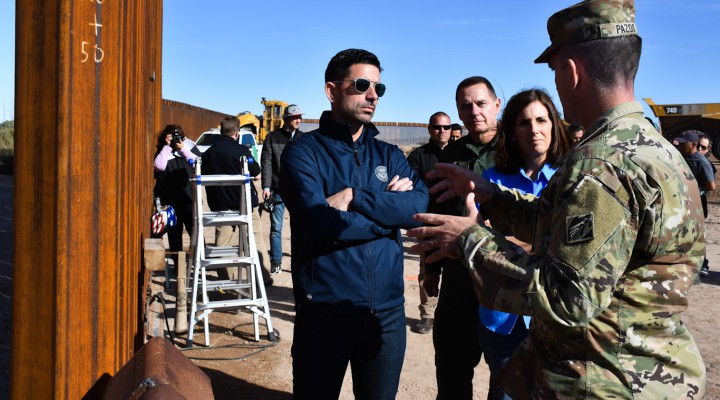 The phrase “all options on the table” is largely used in politics as a code phrase conveying the most extreme violence imaginable, without having to explicitly state it. Now it’s being used against American citizens.

MPN– Even after three months of continuous demonstrations over the police killing of George Floyd, protests in Portland, Oregon continue, as demonstrators clash with police and pro-Trump groups. With no end in sight, acting Secretary of Homeland Security Chad Wolf sent a cryptic but threatening message to Black Lives Matter and other groups, telling ABC News that “all options continue to be on the table” as a response.

Since Portland Mayor Ted Wheeler has attempted to undermine federal agents’ presence, it appears that Wolf is hinting at a military response, despite his pleas for an end to violence. Senator Tom Cotton has already demanded that Trump send in the troops to deal with the protests. The U.S. has a history of crushing domestic dissent with force. In 1970, the Ohio National Guard opened fire on anti-war protesters at Kent State University, killing four. Fifteen years later, police used helicopters to drop bombs on the black activists at the MOVE compound in Philadelphia, destroying an entire block of housing.

While these are extreme events, the phrase “all options on the table” is largely used in politics as a code phrase conveying the most extreme violence imaginable, without having to explicitly state it. The phrase was famously used by President George W. Bush throughout his administration when discussing Iran and its supposed nuclear weapons program. When asked by a reporter if “all options” could mean a nuclear attack on Iran, Bush refused to answer, simply re-stating that “all options” were on the table.

Iran is a particular target of the “all options” rhetoric, whether Republicans or Democrats control the executive branch. President Obama also continually threatened Iran with a nuclear attack throughout his presidency, stating that he was prepared to strike. In 2009, he said he wished to go down the diplomatic path but “without taking other options off the table.” Three years later, Obama again insisted that “all options” were on the table, adding that he “doesn’t bluff.” Evidently, that was false, however, as the next year, he was making the same pronouncement about his options, this time alongside Israeli Prime Minister Benjamin Netanyahu in Jerusalem. All of this in an attempt to stop something which experts agree Iran was not even trying to pursue.

U.S. allies have begun to adopt the same rhetoric. Last September, a Saudi ambassador announced that “all options were on the table” with Iran, after an attack on oil processing facilities — something which Riyadh immediately blamed on Iran.

As with many other issues, the Trump administration is more explicit and forthright in its rhetoric. In 2017, Vice President Mike Pence gave a speech in South Korea highlighting the U.S.’ resolve to stop North Korea from obtaining atomic weaponry. “We hope to achieve this objective through peaceful means, but all options are on the table,” he stated, thereby strongly implying “all options” meant violence. Trump was less able to use coded language, threatening the D.P.R.K with “fire and fury” like they had never seen before.

All options. Always. All options are on the table.”

Considering that the United States had already placed devastating sanctions on the country, killing an estimated 100,000 people and that the U.S. has sent troops to neighboring Colombia, a military attack is clearly a possibility, especially if U.S.-backed coups continue to fall flat.

Trump’s press secretaries have also used the “all options on the table” rhetoric in relation to Russia and Syria.

The phrase, therefore, is continually used against foreign enemies of the U.S. government as a way of threatening war or even nuclear annihilation without having to explicitly state it, letting the threat pass under the radar of many, and allowing for plausible deniability if challenged. The fact that government officials are beginning to use that same rhetoric against the domestic population in Portland is not a positive sign for the future of the city or the country.