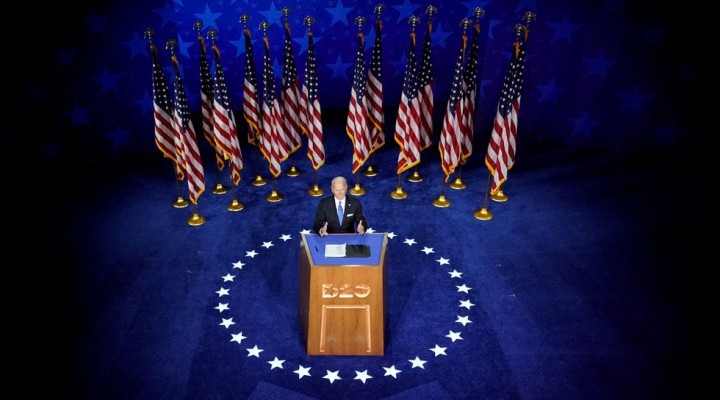 The key message from this year’s DNC is the emphasis the Biden campaign is putting on reaching out to so-called “moderate Republicans,” presenting Trump as an aberration and Biden as the cure.

MPN– The Democratic National Convention continued for a fourth night last night, as the party coronates former vice president Joe Biden as its nomination for November. Originally scheduled to be held in Milwaukee, the current pandemic meant that it is mostly taking place virtually, allowing the DNC to hold a more carefully choreographed celebration than would otherwise have been possible.

One key message from the proceedings is the emphasis the Biden campaign is putting on reaching out to so-called “moderate Republicans,” presenting Trump as an aberration and himself as the cure (Biden himself floated picking a Republican as a running mate). The convention features a number of GOP speakers, chief among them John Kasich, who Donald Trump asked to become his vice-president in 2016, offering him substantial control over both domestic and foreign policy. “I’m a lifelong Republican, but that attachment holds second place to my responsibility to my country,” Kasich said. “We’re being taken down the wrong road by a president who has pitted one against the other.” George W. Bush’s secretary of state Colin Powell made a similar plea to voters to “restore [decent] values to the White House” by electing the former Delaware senator. Other Republicans featured included former Environmental Protection Agency Administrator Christine Todd Whitman and former California gubernatorial candidate Meg Whitman. There were fewer progressives speaking, undermining Trump’s claim that “Sleepy Joe” is a pawn of the “radical left.”

Perhaps the star of Thursday evening’s events was a 13-year-old boy with a stutter that Biden, who formerly suffered from the same condition, had helped. “Without Joe Biden I wouldn’t be talking to you today,” said Brayden Harrington, to the delight of journalists and political commentators. Massachusetts Senator, Elizabeth Warren, meanwhile, spoke from an empty classroom, where she displayed the letters “BLM” prominently behind her — clearly a symbolic message. However, breaking convention, Hawaii congresswoman Tulsi Gabbard was not invited to speak, despite winning more delegates than Biden’s VP pick Kamala Harris. Meanwhile, Alexandria Ocasio-Cortez was given just one minute to speak.

Biden was able to overcome the progressive challenge and beat out Vermont Senator Bernie Sanders for the nomination. But Sanders’ and other progressives’ marks are clearly seen in the party’s platform, formally adopted on Tuesday. The platform calls for universal free COVID testing, treatment and vaccination, making state and community college tuition-free for most people, comprehensive criminal justice reform, including decriminalizing marijuana usage, a $15 minimum wage, and an end to what it calls the “race to war with Iran.” However, it did not adopt Medicare-For-All nor a Green New Deal, leading many on the party’s left-wing to vote against it. The embarrassing visual shot of large numbers of voters on the convention floor voting against it was spared due to the pandemic.

Progressive as it is, the platform is in no way binding and represents only a symbolic “wishlist” of party proposals. Even if the Democrats championed all the legislation, it is far from clear whether it would survive negotiations with Republicans, and could potentially be filibustered even if they had a majority in both house and senate. Moreover, Biden himself refused to say he would lift sanctions on Iran if president, and insisted that “nothing would fundamentally change” under his administration. Furthermore, the platform also includes the line “Democrats believe the Western Hemisphere is America’s strategic home base,” and promises to continue to “rescue” — i.e. “overthrow” — Venezuela, a section which sounds eerily familiar to the Reagan era of dirty wars in Latin America. John Negroponte, the Republican diplomat infamous for his role in the region’s genocides of the 1980s, recently endorsed Biden, stating that he was, “just not sure the country can withstand another four years of the presidency with a man who has shown such disregard to the office.”

Let me here some policy proposals? Please? All these platitudes mean nothing

The Democratic establishment has also assiduously avoided discussing its progressive platform, focusing on Biden’s values and Trump’s lack of them, Biden’s wife Jill asking, “How do you make a broken family whole? The same way you make a nation whole. With love and understanding. And with small acts of kindness. With bravery and with faith.” While poll aggregators show Biden with a relatively healthy lead, this time in 2016 Hillary Clinton also ran on a policy-light ticket and presented Trump as an aberration, not a symptom of a wider problem in American society. Clinton had a larger lead than Biden does and lost decisively. Furthermore, Biden is suffering from an enthusiasm gap, with most Democratic voters viewing their ballot as one purely against Trump, with less passion for President Obama’s former running mate. And with Trump actively trying to undermine the postal voting process, determination might be a prerequisite just to cast a ballot in November. The race is on.