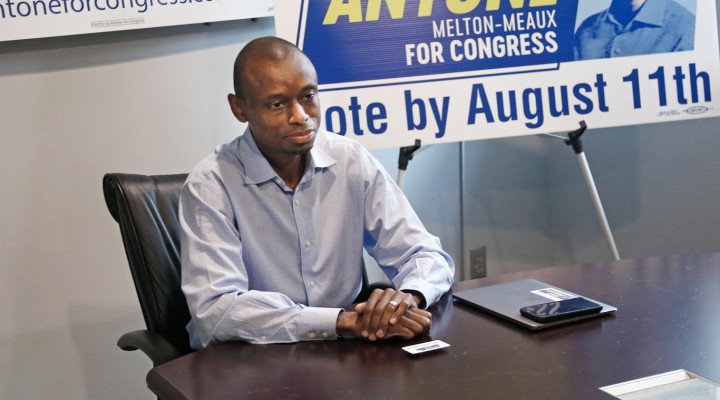 A little-known union-busting attorney from Minnesota is raking in millions in campaign donations, mostly from out of state, in his attempt to unseat anti-war Rep. Ilhan Omar.

MPN– Some of the most committed pro-Israel and anti-Palestinian groups are flooding the Democratic primaries in an attempt to unseat Rep. Ilhan Omar.

On the surface, there are five candidates Democrats vying to be the congressional representative for Minnesota’s 5th district. But, in reality, it is a two-horse race, with two candidates raising millions, mostly from out of state, in this unusually hotly contested primary. One’s presence is perfectly understandable; in two short years, Ilhan Omar has risen to be a highly visible (and controversial) progressive champion. According to polls, she is more known to the American public than prominent Democrats like New York Mayor Bill de Blasio, Hillary Clinton’s running mate Tim Kaine and presidential candidate Andrew Yang.

The other is more surprising: Antone Melton-Meaux, a lawyer by trade and a political neophyte has been the unlikely recipient of millions of campaign dollars. If you live in Minneapolis and turn on the television or radio, you will very likely hear a well-produced ad extolling Melton-Meaux or criticizing Omar. The challenger has raised over $4 million in his quest to unseat the Somali-born politician, a huge sum for a congressional primary. And while Omar has now closed the funding gap, their monies come from very different sources. The majority of Omar’s funds come from small donations, with under two percent from political action committees (PACs). In contrast, Melton-Meaux has received huge sums from pro-Israel groups and from wealthy individuals eager to see Omar unseated. The number one zip code for donations to his campaign is in Beverly Hills, CA. And according to Ken Martin, chairman of the Minnesota Democratic-Farmer-Labor party, his average donation on Democratic fundraising website ActBlue is $650 (Omar’s is $18).

Much of his money comes from pro-Israel PACs. America PAC, for instance, has given around $382,000. Strongly conservative group NORPAC raised over $100,000 for Melton-Meaux in fundraisers in May and June, with AIPAC generating three times that amount for him. “Together, we have the privilege of accomplishing a dual objective. Supporting a deserving candidate, Antone Melton-Meaux, who has communicated a genuine desire to strengthen the U.S.-Israel relationship and bring honor to his country and party while at the same time replacing Ilhan Omar, a highly divisive member of Congress who has proven to be unfairly and repeatedly critical of Israel,” explained NORPAC. Omar speaks at a rally at the U.S. Capitol during a house vote to limit Trump’s ability to go to war with Iran, Jan. 9, Jose Luis Magana | AP

Omar has been a vocal critic of Israel and a supporter of the Boycott, Divestment and Sanctions movement against it. One of the only Muslims in Congress, she has also criticized the $3.8 billion in yearly aid the U.S. gives Israel, arguing that Washington should be leveraging the aid to stop the illegal settlements and ensure full rights for Palestinians. “We must end [the occupation of Palestine],” she said. Last year the Netanyahu government denied her entry into Israel or Palestine, where she was to meet with members of the Knesset and the United Nations. Pro-Israel critics have constantly described her criticism of the state as anti-semitic.

Some in Minnesota have worried about the implications of such an influx of money to the race. “[We] need to ask where is this mountain of money coming from and why are they doing it and what do they expect for it,” said Keith Ellison, Omar’s predecessor as Congressional Representative for the 5th district.

Melton-Meaux himself has been rather vague with his campaign, running primarily on a message of unity and of being an alternative to Omar. There are zero policies mentioned in the “why I am running” section of his website, promising only to end hyper-partisanship in Washington and work with others — presumably Republicans — to get things done.

On key issues, he has serious disagreements with Omar. He opposes Medicare-For-All, calling only for better “access” to “affordable” healthcare, and has been critical of the Black Lives Matter movement. While Omar supported Minneapolis’ decision to dismantle their police force and start from scratch, Melton-Meaux has condemned the idea, presenting police as peacekeepers. “We’ve seen what happens when the police aren’t present and there’s been a lot more violence since then in Minneapolis, separate and apart from the civil unrest,” he said.

The Minneapolis Police Department has proven themselves beyond reform.

It’s time to disband them and reimagine public safety in Minneapolis.

Thank you to @MplsWard3 for your leadership on this! https://t.co/AQfHM5M6eR

For all his talk of ending divisiveness, Melton-Meaux has certainly had a divisive career as a partner in Jackson Lewis, a law firm that specializes in union-busting. As the Huffington Post noted, in at least three cases, he represented large corporations that were fighting lawsuits from workers who claimed they were discriminated against or had their wages stolen by their employers. “It’s troubling to see somebody who’s running as a Democrat have that sort of record,” said Chris Shields, a spokesperson for the Minnesota AFL-CIO.

In many respects, the Minnesota primary resembles the Democratic presidential nomination, with a fierce but silent struggle between more radical grassroots figures and well-sponsored “moderate” opponents. Residents of the 5th district will have the opportunity to choose between the candidates on August 11 and decide whether the Minnesotan Pete Buttigieg will get further than just the primaries.